field was quiet as these two warriors faced off. Both knew this was an elimination match between these two giants of the game. The winner could continue the struggle for the Top 8, while the other's chances would have to be sacrificed, like so very many lands before them.

Masashi Oiso won the roll and laid an . Gabriel Nassif did the same. Tinder farm Matched . The occasional cantrip was the only spell from either play for the first few turns, quite a different style than the other Extended decks we've covered Saturday.

Nassif made the first move with a Balancing Act for every permanent, floating enough to play from the Loam to get the lost lands back. Oiso had enough lands in his hand to recover, but with a from the Loam, he'd need to get aggressive soon or simply lose to attrition.

Oiso attempted the most powerful card in the matchup, Terravore, but Nassif had the Condescend. On Nassif's turn, he again played Balancing Act for every permanent, still with access to a from the Loam for smooth recovery.

Unfaltered, Oiso continued to play lands. On his ninth turn, after having six lands blown up, he ed Nassif to stop any counter nonsense and played the other threat: Anurid Brushhopper. The Brushhopper's ability to evade mass destruction is what made it such a strong choice in the deck. It's equally valuable against the deck.

Oiso decided to go for the throat with a Terravore. Nassif allowed it to resolve, d back his from the Loam, and cast , once again destroying everything in play. Oiso saved his Brushhopper, giving him the only creature in play but putting him dangerously low in resources. Oiso began his assault in three-point chunks.

Nassif, with only cantrips and Condescends in hand, began to do some mental math on how much damage he was willing to take from the beast. Nassif had to let the creature continue to attack, as casting left him wide open for a lethal Balancing Act. Oiso looked like he was willing to take the risk, but ultimately passed with Nassif at 5 life. 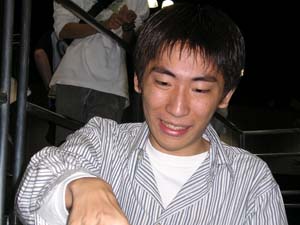 Oiso tried to wear down Nassif in Game 1.

Nassif did draw a Brushhopper of his own, but chose to try to bait a counter out of Oiso's hand with multiple first. Oiso didn't rise to the bait and stoically let his creature become tapped each attack step and passed the turn.

Nassif got his Brushhopper to resolve, although he was still at a very low life. Nassif's multiple From the Loam castings meant he severely out-mana'd Oiso. With Condescend the only counterspell from both players, this was a critical advantage. Nassif's extra mana meant Oiso couldn't counter Nassif's Brushhopper, yet was still vulnerable to Gabriel's.

Oiso started an initiative in his turn with a Burning Wish for Cranial Extraction, followed by . Chant was Condescended for one, which Oiso allowing it to be countered. Oiso than sacrificed his two remaining untapped lands in an attempt for Extraction. Nassif had his third Condescend and Oiso had to pass.

With Masashi tapped out, Gabriel laid a gigantic Terravore. Oiso, in true mirror match fashion, laid one of his own. The key difference between the players was Nassif's six lands in play to Oiso's one.

Nassif offered his Terravore in trade and Oiso took killed them both off. Nassif then cast Burning Wish for Innocent Blood, simply to act as a Mind Swords. The plan worked as Oiso was left with one land, one Brushhopper, and no cards in play to Nassif's seven lands, Brushhopper, and two cards in hand At this point the game was in Nassif's hands. Terravore from Nassif earned the victory. 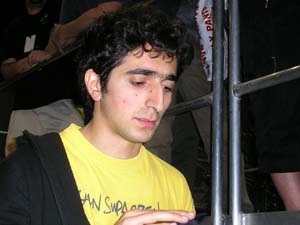 Nassif knew his Pro Tour life was on the line in Round 13.

For Game 2, Masashi had to pause for a second on whether to play or draw, but took the standard route. Again, both players spent their first few turns laying out cantrips and Invasion sac lands.

Nassif played the first relevant card in the game: A Burning Wish that found the Game 1 MVP: From the Loam. Oiso spent his window to play Anurid Brushhopper. Nassif used that opportunity to play a Brushy of his own.

Oiso Wished for Cranial Extraction, but decided not to sacrifice two lands to play it that turn. Instead he waited until the next turn to a land and play to protect Extraction. It removed all of Gabriel's Terravores from the game.

Nassif thought things were getting hectic and cast with a green mana floating. Oiso chose to not counter but cast a Chant in response, to prevent a from the Loam casting that turn. Nassif waited two turns to draw another green source and got right back in it with three returned lands.

Oiso did his best to find relevant cards with Top and Serum Visions, but it was looking like a repeat of Game 1 with fewer lands and cards than Nassif. Oiso still had a chance if he could get a Terravore to stick, it would be lethal in two attacks.

Oiso went for it and sacrificed a land to play a Terravore, leaving himself wide open for any kind of permission. Nassif did have the Condescend, but decided to go for instead. Oiso had one card in hand and a top in play to save his Brushhopper, but at that point he would truly have only his 3/4 against Nassif's entire deck.

This is exactly what happened, with Oiso not able to attack or play any spells for the rest of the game. Nassif played a Top of his own to search for his three remaining victory conditions. Again, from the Loam was strong here as Nassif could simply when he wanted to see three new cards. Time was getting very low at this point, so Nassif merely had to keep his advantage to score a 1-0 win. Both players having Top in play favors the man up a game.

Nassif kept his defenses strong with a second Brushhopper. At this point Nassif would probably win the long game, for which there simply wasn't time. Oiso threw out his Hail Mary final Terravore, but of course Nassif had another Condescend. Time was called and Oiso had five turns to deal 19 damage past Gabriel's two Brushhopper, four lands, and another counterspell. It didn't happen and Nassif won his match 2-0, keeping the Top 8 dream alive.