Round 13: By Your Command

Newer players out there probably don't know Nicolai Herzog, but he is only living person in the world to win two individual Pro Tour titles in the same season (and ridiculously enough both in the same format, Mirrodin Draft). He is widely recognized as one of the best Limited players on the face of Earth, and the fact that he is still in contention here in Kuala Lumpur means his heyday may not yet be over. He faces two-time Czech National Champion Martin Juza, who is seeking to follow up his Worlds 2007 Top 32 finish with a better result.

Both players are at 9-3. Another loss here could mean that they'd be playing the Malaysian Open tomorrow instead of drafting for the sixth time. 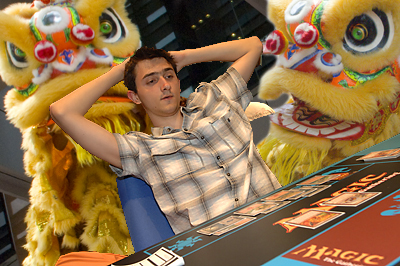 Martin Juza isn't lion.Herzog won the die roll and demonstrated how crucial that was with his explosive start. Goldmeadow Stalwart and Woodland Changeling threatened to crush Juza swiftly. Herzog failed to draw a third land and could only manage Fertile Ground on his third turn.

Juza's first play of Fire Juggler attempted to take down Woodland Changeling, only to see it reinforced by Earthbrawn. Juza was now down to 12 and facing a 3/3 Woodland Changeling and Goldmeadow Stalwart. Squeaking Pie Grubfellows entered play on Juza's side to block the 3/3 Changeling only to meet another Earthbrawn, making it 4/4.

The tempo advantage was tremendously overwhelming and the lack of a second Mountain rendered all the red cards in his hand useless. Juza mulled over his options and said, "Jeez!" He thought hard and used his Profane Command to kill the Stalwart and reanimate a Fire Juggler, but it still paled in comparison to the 4/4 Woodland Changeling. Amazingly, Herzog was still stuck on three mana but still keeping the pressure up.

Juza was now at a precarious 4 life, holding onto a hand of gas. Herzog summoned yet another changeling, this time one with flying. Juza's Chandra Nalaar speedily fried the Avian Changeling to a crisp, but Herzog had more dudes in the form of Kinsbaile Skirmisher and Lys Alana Bowmaster. Chandra shot down the Bowmaster as her second victim, and Juza put Spitebellows into play and threatened to gain control of the board. After Juza made an attack on Chandra Nalaar, Spitebellows cleared the board, but Miss Planeswalker had also met her end in the process.

Herzog dropped the Chameleon Colossus, and all Juza could do was chump with not one, not two, but three Inner-Flame Acolytes on successive turns.

Both players were playing in topdeck mode now, and Juza needed an answer desperately. The only red spells capable of efficiently killing a Colossus are Consuming Bonfire and Titan's Revenge, and his next draw wasn't any of them.

Herzog: "Could have done with a third land, though."

Juza brought in Needle Drop and Nath's Baffoon, taking out Roar of the Crowd and the clunky Supreme Exemplar. After the match, Juza mentioned that Needle Drop was really good against reinforce cards, and Herzog agreed. Nicolai boarded out Lys Alana Bowmaster for Lignify.

Juza elected to play first. but it was Nicolai who had the first move. Goldmeadow Stalwart (revealing Surge of Thoughtweft) appeared again, but he had no other play on the next few turns. Inner-Flame Acolyte from Juza zoomed in for 4 speedy damage and knocked Herzog's down to 16. Herzog cycled a Surge of Thoughtweft, clearly desperate to draw some threats.

Juza followed up with a second Inner-Flame Acolyte and smashed Herzog for another 6, bringing him down to 10 life on turn four. He drew into a Kithkin Mourncaller, which stayed back to deal with the pair of Elementals now that he was being mauled. Juza added War-Spike Changeling and ended the turn. Herzog had a Changeling of his own, but it was slightly bigger, the trampling Game-Trail Changeling.

Juza put Moonglove Extract and Mudbutton Torchrunner on the board and continued to defend. Herzog added Lys Alana Huntmaster, and Juza, upon seeing a worthy target attacked with the Goblin. Upon its death, it attempted to torch down the Huntmaster, but Earthbrawn (for +3/+3) ensured that it survived and that it was also out of range of the Moonglove Extract.

Herzog's Oblivion Ring sent the War-Spike Changeling into oblivion and Juza threw the Moonglace Extract at the Kithkin Mourncaller pre-combat. Herzog reinforced with Hunting Triad, but Juza was unfazed by the 5/5 monstrosity and showed Herzog Eyeblight's Ending. Herzog attacked with both his Stalwart and Game-Trail Changeling and Juza gang-blocked with both Acolytes to take the "moose" down.

At this point of time, Herzog had Goldmeadow Stalwart and Lys Alana Huntmaster. Juza, on the other hand, had nothing on board and no cards in hand.

Things looked grim, but everything changed when Juza savagely ripped Profane Command off the top of his deck. He reanimated Inner-Flame Acolyte and got rid of the Huntmaster. On the next turn, he peeled Flamekin Harbinger and ensured that he would be getting a Changeling Berserker on the next turn. Herzog chumped until he could chump no longer.

"That was just strong, the nice little turnaround," Herzog lamented.

Herzog led with a Woodland Changeling, Avian Changeling and Lys Alana Huntmaster whilst Juza replied with Soulbright Flamekin, Fire-Belly Changeling and Squeaking Pie Grubfellows. Unable to launch an effective attack, both players chose not to utilize their land forces but Herzog had the upper hand as he was chipping away at Juza's life total with the flier.

"Players, it is now time..." At this juncture, both players were startled, as they did not want a draw. "...to announce our daily drawings winner!"

Both players laughed it off and resumed the serious pace of play. 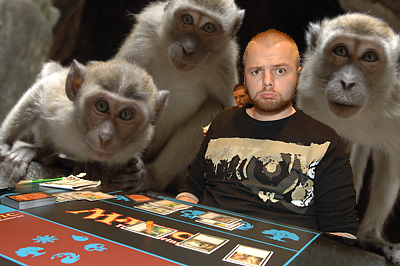 Herzog monkeys around."That's my friend who won the Mox Jet, I'm really happy for him," Juza commented. Yeah, just so you know we're giving away a full Power 9 set, and anyone who attends any public event at this Pro Tour stands a chance to win a piece of the glory.

Herzog dropped his Chameleon Colossus, threatening to take the game for him once again. Profane Command showed up to kill the Huntmaster and giving Squeaking Pie Grubfellows fear to sneak in for three damage.

Juza chumped Colossus then Herzog sank into deep thought. He laid a land and dropped Game-Trail Changeling, going down to one card in hand. Juza's kinship activation revealed an Inner-Flame Acolyte, and Herzog groaned as he was forced to discard an Earthbrawn. "I could have slow-rolled for a land..." he said. But honestly, I would have taken the gambit too, since waiting for land seemed like too slow an option.

With only six lands in play but with help from Soulbright Flamekin, Juza generated eight mana to drop Inner-Flame Acolyte and Changeling Berserker and passed the turn again. Herzog attacked with everything—his pair of 4/4s, the Avian Changeling, and even the measly Elf Warrior token. That wiped Juza's board and reduced him to 4 life. Time was ticking away as he struggled to find a solution to the Colossus, but Herzog ended all hopes by sealing the deal with a Fistful of Force.