Round 13:Let the Spirit Guide You

The latest in an event-long string of grudge matches and re-matches, Round 13 offers us a replay of the finals of Pro Tour–Yokohama. Now, as then, the two participants were showing off some interesting concoctions. Both had seen the reliance of Legacy decks on nonbasic lands and decided to punish them. Mitamura chose mono-blue control with a Back to Basics sucker-punch. Wafo-Tapa defied his pedigree of blue-based control to pilot the amazing Dragon Stompy. Acceleration from two-mana lands, Seething Song, and Chrome Mox launch Dragons and disruption from Chalice of the Void and Blood Moon. 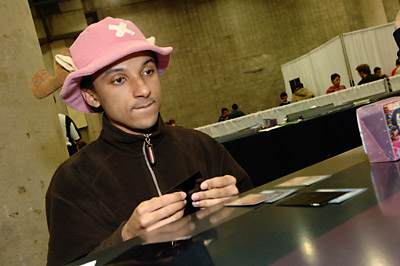 Antoine Ruel's lucky pink moose hat didn't keep him in contention, but it may yet do the trick for Guillaume Wafo-Tapa Mitamura mulliganed, and led off with Ancestral Vision. Wafo-Tapa, having inherited the Pink Ruel Moose Hat, answered with Chalice of the Void for one. This was a blow to Mitamura, who failed to draw a third land and would have loved to Brainstorm. He suspended another Ancestral Vision.

Wafo-Tapa untapped, played a Mountain, and pitched Simian Spirit Guide to power out Rakdos Pit-Dragon. Mitamura untapped for his third turn, but luck was not with him. He was forced to do nothing on a turn he would have much rather spent locking up Ancient Tomb with Back to Basics. How much rather could be measured by the frown on his face when Wafo-Tapa played Seething Song and Arc Slogger. The path downwards to zero was steep, indeed.

That seemed to take the wind out of his sails. He dropped an Umezawa's Jitte and passed it back. Mitamura drew a second Ancestral Visions and suspended it. A turn before the first could resolve, Wafo-Tapa played out a morph and Mitamura was forced to let it through. Wafo-Tapa suited it up with the Jitte.

Mitamura cashed in his first Ancestral Vision then Brainstormed, sacrificed a fetchland, and Brainstormed again, churning through his deck for answers. He sent it back to Wafo-Tapa, who dropped a Mountain, swung in, and pitched his last card to turn up Gathan Raiders, hellbent to 5/5. It was small comfort to Mitamura that Wafo-Tapa had no other threats.

Mitamura had a plan, but it wasn't terribly pleasant. He played a sixth Island and Vedalkan Shackles. After Wafo-Tapa drew, Mitamura attempted to Shackle the Raiders, now only 3/3, forcing Wafo-Tapa to spend his Jitte counters. In his main phase Wafo-Tapa tried a morph, which Mitamura Force of Willed. The hellbent Raiders hit for 9, leaving Mitamura at 3.

He untapped, and played a fetchland, pasing the turn. Would he be able to stabilize? Wafo-Tapa untapped and drew. Again Mitamura turned on the Shackles, during Wafo-Tapa's draw step. Wafo-Tapa spent his counters, and Mitamura cracked his fetchland for Island number seven, enough to steal the Raiders even with the Jitte pump. Wafo-Tapa turned over the card he had drawn: Simian Spirit Guide, the only card he could get rid of during his draw step, for the win.