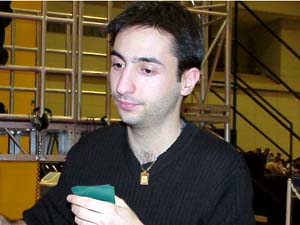 Ben and Raphael shuffled up for Round Fourteen of this grueling Pro Tour, another tournament was just beginning: the Kobe Beef Standard tournament, where the top four players would receive coupons for a free Kobe Beef dinner. A number of pros who had missed day two were spotted trying their luck. Antoine Ruel was playing a bastardized White control deck that had main deck Circle of Protection: Red and Viridian Shaman. Osyp Lebedowicz built the "Affinity deck he wished he'd played in the Pro Tour", a Black/Red version with Arcbound Stingers instead of Somber Hoverguards.

Anyway, Ben and Raphael happened to be discussing Kobe beef as well, after Ben commented that he was hungry and Raphael offered to buy him any food he wanted if he went to eat it right then. He suggested Kobe beef, and Ben replied that he had just tried it last night, and that it was good but not quite worth the eighty-dollar price tag.

Ben was shuffling up the CMU/TOGIT affinity deck, a Blue/Black variety featuring both Tooth of Chiss-Goriaand its counterpart the Scale. Levy was, of course, playing TwelvePost..

Ben won the right to play first and started the match with Darksteel Citadel and Chromatic Sphere. Levy just had Forest. On Ben's second turn, he played out Seat of the Synod, followed by Skullclamp and a free Frogmite, then Thoughtcast. On end step, Levy destroyed the Skullclamp with Oxidize.

On his second turn he put a Cloudpost into play and then lapsed into thought. "Another Oxidize?" asked Ben as Levy fingered his Forest. "I don't know what to do," he admitted. After another minute, Ben got tired of waiting and said, "Pick Raph, there's not that many choices." The valid targets were Seat of the Synod, Frogmite, and Chromatic Sphere.

Eventually he chose to gun down the Seat. Ben attacked for two, then played Vault of Whispers and Arcbound Ravager. Levy played a third land and a Talisman. Ben played Skullclamp, put it on Ornithopter, sacrificed it to draw two, then cast Disciple of the Vault and attacked with Ravager and Frogmite. It ate Darksteel Citadel and another artifact land to grow to 4/4, taking Levy to ten in combination with the Disciple damage.

Levy untapped and played Solemn Simulacrum with a Forest up, then ended his turn. Ben just looked at him and said, "Do you have an Oxidize? Because if not you're dead." Levy picked up his cards.

Both players kept their hands again. Levy started with two Forests, while Ben had Arcbound Worker, Arcbound Ravager and Frogmite. Viridian Shaman entered play and destroyed the Frogmite. Ben then played Skullclamp, Chromatic Sphere, and Myr Enforcer, while Levy could only roll his eyes at the American's luck. Arcbound Ravager ate the Worker and attacked as a 3/3, bringing Levy to sixteen.

He played a Talisman of Unity and Oblivion Stone. Ben sacrificed his Chromatic Sphere for the CMU sideboard tech, Oxidize, and then played a new Ravager and sent the team. Shaman jumped in front but Levy would still be in lethal range next turn.

A new Shaman came down and killed Myr Enforcer. Ben, seemingly with all the answers, had Terror for the Viridian Shaman, then went through the math. He could do exactly twelve if he sacrificed everything to one Ravager, but he would lose the game to an Oxidize. Levy sat with two open mana and dared him to go for it. 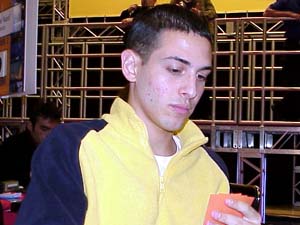 In the end, Ben just hit for seven, realizing that Levy had no outs on his next turn. With only five mana currently and no Chrome Moxes in his deck, he wouldn't be able to play Platinum Angel, Tooth and Nail, or Oblivion Stone with activation mana on his next turn. Realizing this, Levy just drew his card and gave up, saying, "You got me."

Afterwards, he wondered if he should have mulliganed his hand of three Forests, Viridian Shaman, and combo pieces. Most likely he should have, but regardless he would have had a hard time finding a replacement hand good enough to beat Ben's near-perfect draw.