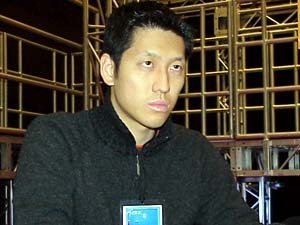 has quietly become one of the most consistent players on the Pro Tour, with top finishes in Pro Tours, Grand Prix, and even a finals appearance in the last Masters. He had a Top 8 this season at New Orleans, and is looking to get another today. His opponent this round is Masashiro Kuroda, a top Japanese player who went undefeated yesterday. Unfortunately, Kuroda has had a trend in his career where he will go undefeated on day one of a major tournament, and then not do very well on the following today. Today, that trend has continued, as he is 2-3 on the day heading into this round. Unless he can return to yesterday's form, he'll have to deal with another event where he started off with a spectacular record but couldn't keep the momentum going.

Nassif mulliganed down to six. He played a Cloudpost and got a second with Sylvan Scrying, and then played a third with a grin that said, "Okay, I just drew this one and got a little lucky." He played Oblivion Stone, and Barbed Lightning went to the face on end step. Kuroda untapped, and summoned Solemn Simulacrum. Tooth and Nail was entwined, putting Darksteel Colossus and Platinum Angel into play. Kuroda had a second Simulacrum, and put both in front of the Colossus during Nassif's attack. After damage went on the stack, one was sacrificed to a Shrapnel Blast, dealing five to Nassif. Kuroda played an Arc-Slogger, and on end step Nassif activated the Stone to clear the path for a fatal Colossus attack.

Nassif found a second Cloudpost with Scrying, and Molten Rain destroyed the one in play. This stalled Nassif drastically, as he found himself stuck at two land. On end step Pulse of the Forge went to the dome, and Kuroda put some pressure on the table with Arc-Slogger. Nassif found a third land and played Oblivion Stone, and Kuroda attacked with his Slogger and Nexus to deal five damage. A few shots and one attack later, the game was over. 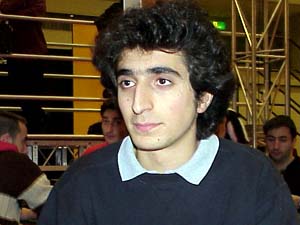 Nassif mulliganed for the second time in the match, and after a great deal of thought, Kuroda mulliganed as well. Nassif played a Cloudpost and searched up another, leading to Oblivion Stone. Molten Rain destroyed a Cloudpost as Nassif shook his head, once again stuck at two lands as he laughed. Kuroda had no problems, playing a Talisman and destroying the Stone with Echoing Ruin. Nassif eventually drew another Cloudpost and played another Stone, while Kuroda had six lands and nothing else. Reap and Sow was cast to bring the Cloudpost count up to three, bringing Nassif back into the game after it seemed he was convinced that he had lost. Once again, an Echoing Ruin destroyed Oblivion Stone, and Nassif cast Reap and Sow to get a forest. With a shrug, he tapped all his lands and played Platinum Angel. It survived and attacked on the following turn, and Nassif added to his side with Tooth and Nail to get a Colossus and a Duplicant for insurance, playing the Colossus and Shaman from his hand. This was a position Kuroda couldn't get out of, and he conceded.