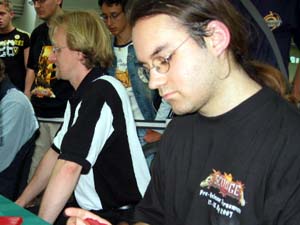 happens so often in European Grand Prixs. The home players walk in full of hope of keeping the title home and at the end of the weekend they are all out of contention. Christian is the last Swiss hope.

He reached the last round of the tournament with a shot at the top 8. He just needs to win this last round.

Kreher was forced to send his land-light first hand back. He wasn't too happy about his second one but he kept it. Bertrand opened with two Mirrodin's Cores and a Talisman.

That proved to be helpful for his opponent. Kreher played Tel-JIlad Justice and the scrying helped him smooth out his mana. He tried a turn four Solemn Simulacrum but Fagnoni had Condescend. Reap and Sow met the same fate a turn later.

A second Reap and Sow stuck and a second Cloudpost gave Kreher eight mana. He was finally able to unleash his expensive spells. He shrugged and tried Platinum Angel. Bertrand allowed it, only to use Electrostatic Bolt to send it packing a turn later.

The French then used Granulate to take the Oblivion Stone before playing March of the Machines. His two Darksteel Ingots suddenly turned into big threats. A Thoren soften the first hit and Kreher found another Oblivion Stone.

The Stone took away the March and Fagnoni produced Arc-Slogger. Christian tried hard to slow it down but Bertrand was having none of that. A Bolt and a shot from the Slogger cleared the path and a second Slogger joined the army.

Bertrand: "Tooth?"
Christian: "Why should I draw a Tooth?"

He hardcasted Darksteel Colossus. And still had five mana untapped. The Sloggers charged on and the Colossus ate one up. Kreher was at twelve. On the next turn Kreher tried Mindslaver.

Fagnoni spent a Condescend just to make sure Kreher would be one mana short of blowing the Mindslaver right away. The Colossus atacked.

Bertrand was still alive, and the Colossus attack gave him the opening he needed. He attacked with Slogger and showed his opponent Beacon of Destruction. That brought the Swiss to within reach of the Arc-Slogger.

Again they started slowly and Kreher missed his third land drop for one turn. Fagnoni was on a rampage. He played turn four Arc-Slogger while his opponent could only play an Oblivion Stone, stuck at three lands. 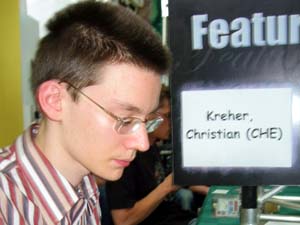 The Slogger started doing its thing while Kreher cursed his luck. He played an Eternal Witness to slow the Slogger down but Bertrand had the Electrostatic Bolt He then played a second Arc-Slogger.

Final result:
Bertrand 2-1 Christian. Bertrand Fagnoni is in the Top 8!