Round 14: Akira Asahara vs. Gab Tsang 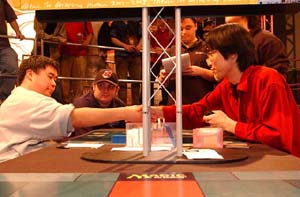 Akira Asahara marches to the beat of a different drummer—check that—he saunters along to some internal soundtrack that only he is privy to. Widely recognized as of the wildest of the Japanese deck innovators, Akira's credits include the Mori Katsu Love-Love Special—a four color, permanentless control deck and Zombie Prison—a Zombie Infestation/Squee/Winter Orb deck. Today he is running an Aluren deck called Astro Nine. His deck's unusual suspects include Eladmari's Call, Academy Rector, False Prophet, Whirlpool Warrior (?!?), the Fallen Empires sac lands, and High Market.

Gab Tsang is playing a Rock Variant with Krosan Tuskers to power up main deck Vindicates. The Canadian national team member is looking for a top 16 finish although both players will finish in the money regardless but the winner will walk away with multiple thousands of dollars more.

Akira won the die roll—defeating Gab's mighty roll of one—and was pleased with his openers. Gab was not and went down to six. Akira opened with a tapped Havenwood Battleground. Gab played a forest and a Bird of Paradise. Akira's Wall of Blossoms dug him deeper into his deck. A swamp and an Elf appeared on Gab's side of the board.

A Ruins of Trokair produced craned necks from all quarters.

"White?" asked Gab. He shrugged and played a third turn Spiritmonger. Akira untapped and played another Ruins. Gab was starting to get nervous and wanted to know how many cards were in Akira's hand—six. Gab swung with his beast and it ate the Wall. Treetop and a Yavimaya Elder made an appearance.

There was a lot of reading and translating going on when Akira played a Japanese High Market and a False Prophet. Once the situation was clear to Gab—Akira could Wrath at instant speed—he activated his Elder and dug deep into his deck. What could he do but attack with the Monger and the Elf and keep his Village back for use later? That's what he did. When the smoke cleared, Akira gained a life and the Monger and Elf were removed from the game. 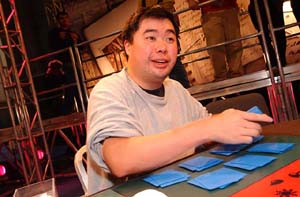 Raven Familiar found Akira an Eladamri's Call and you could sense the game slipping away from Gab. He wasn't going to give in with out a fight though and he cycled Krosan Tusker and cast Vampiric Tutor to get a Duress. Duress whiffed when Akira responded with the Call and plucked an Academy Rector. He also saw Raven Familiar, Whirlpool Warrior (more reading), wall of Blossoms and another Ruins. After the swing and the miss, Gab made another Spiritmonger.

The short story is that Akira untapped and won the game. The long story goes something like this...

Sacrifice two Ruins to play Academy Rector. Use the High Market on it to find Aluren. Play the Familiar and find a Wirewood Savage... "This can't be good!" said Gab who had not played against Aluren all weekend—traditional or otherwise. Once he was at a Million life thanks to a Soul Warden, Gab asked the judge to have Akira demonstrate that he had a way to kill him in the deck. Rishadan Cutpurse would eventually force Gab to sacrifice all of his permanents and an army of Cavern Harpies and Wirewood Savages would swoop in for the kill.

A voice from the bleachers yelled out, "It had to come sooner or later, Gab!"

Both players mulliganed and Gab kept a one-land/Bird hand. Gab played the bird and laughed when Akira named Phyrexian Negator for his turn one Cabal Therapy finding Duress, two Llanowar Elf, Naturalize, and Spiritmonger. Gab drew another Duress and used them to take a Cabal Therapy and Aluren, leaving Akira two caves of Koilos.

Gab continued to abuse Akira's resources when he Vindicated one of his lands. Akira was unable to draw out of the deep hole he was in and the Spiritmonger that followed made short work of him over the next few turns.

Worth Wollpert was watching the match as Gab shuffled infinitely for the final game. "I hate his Disenchant sideboard in this match—it does nothing!" After all of Gab's shuffling he was forced to mulligan an unplayable set of openers and kept the next six he saw. 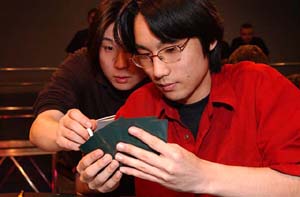 Akira opened with another Cabal Therapy. This time he named Duress but he whiffed and got to see two Birds, Spiritmonger, Naturalize, and two lands. At the end of Gab's second turn, Akira called for a Rector and untapped and played Havenwood Battleground.

Gab realized that a third turn Monger wasn't going to cut it the way the game was developing. Instead he played and sacrificed a Yavimaya Elder leaving himself no mana to Naturalize. Akira untapped and played the Rector. He sacrificed it to flash back Cabal Therapy naming Boneshredder and put his Aluren into play.