Round 14: Another Coordinated Assault

layers returning to the feature match area to play are almost invariably cool, calm, and composed. It wasn't the case this time.

"I'm on full blown tilt. I could have drawn five cards and crushed him. I just didn't have the time."

"I could've drawn later. Now I've used that up. There's only one way from here."

Those were the words of No. 19 Ranked Player Paul Rietzl, who was back in the feature match area but on different circumstances than the round before. After tying the legendary Hall of Famer Jon Finkel in the last match, Rietzl couldn't afford any mistakes: The cut to Pro Tour Top 8 wouldn't allow another tie, let alone loss. Both players had dueled with similar BUG Control decks, a common occurrence given that both of their powerful teams had all brought the same. There were two other BUG Control mirrors in that same round Finkel and Rietzl played.

On the other side sat No. 14 Ranked Player and Pro Tour Return to Ravnica champion Stanislav Cifka, who could have afforded to tie, but he too wanted every win in his remaining matches to lock down the best chance for Top 8. Playing a powerful, aggressive white-red deck built for speed meant Cifka's best chances were Rietzl's worst fears: deploy an unanswerable army in the first few turns. 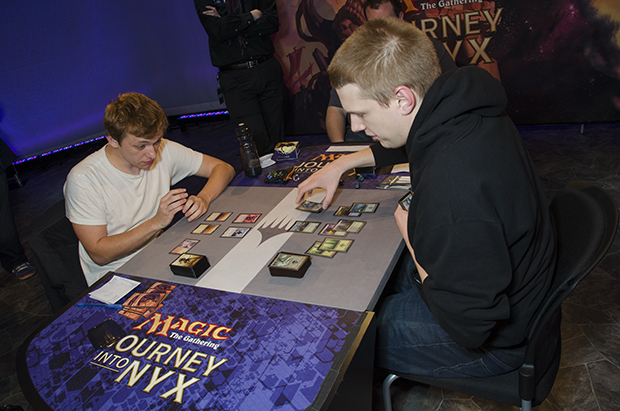 No. 14 Ranked Player Stanislav Cifka and No. 19 Ranked Player Paul Rietzl were both looking for wins in this match to remain in contention for the Top 8.

A tie into taking a loss was a coordinated assault Rietzl would be hard-pressed to avoid.

Mana Confluence was a painful first and second turn land for Cifka, but arguably his best: Ensuring his blistering deck could throw out every creature and spell it could out was his best chance to overrun Rietzl. Akroan Crusader, Dragon Mantle and Coordinated Assault thereafter began putting on immediate pressure.

"You have ways of making mana without taking damage? That's not fair," Rietzl said when Cifka played his third, a Temple of Triumph. But it wasn't Cifka taking damage that Rietzl was concerned with.

First, Ashiok, Nightmare Weaver fell. Then, Rietzl took 8 damage to drop to 12 life in one shot. Prognostic Sphinx was one blocker for the control deck, but four creatures sat across the way. Blocking a token let Cifka drop Rietzl to 5 life, and a second Sphinx led to doubling-blocking the Crusader with Dragon Mantle. Courser of Kruphix replaced the fallen flier. 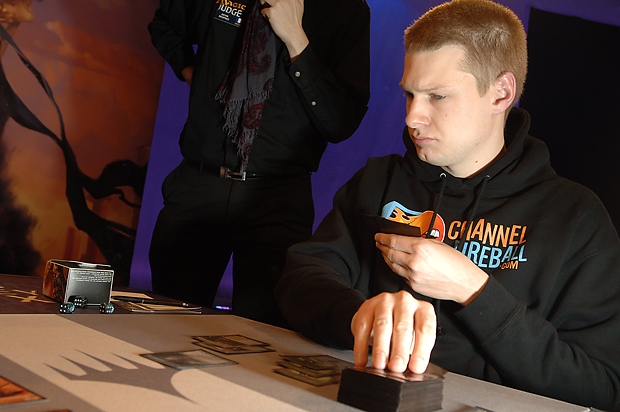 Rietzl attempts to keep up against his opponent's aggressive draw.

However, Cifka's Gods Willing and Ordeal of Purphoros on Satyr Hoplite triggered and attacked Rietzl to 1 life. It was enough.

"Okay. You win." Rietzl said after drawing for his turn.

"Mana Confluence is pretty good when you opponent doesn't have a creatures. You get to just do what you want," Rietzl said as the shuffled for the second game.

"Yeah. I'm surprised we both didn't have them out." Cifka replied, motioning in front of Rietzl.

"It was easy for me though. I cast the most expensive spell I could every turn. I just didn't have creatures."

Phalanx Leader was Cifka's first play in the second, but others didn't immediately join it for an aggressive start. Rietzl, however, used Kiora, the Crashing Wave to gain life and ramp lands with the help of Courser of Kruphix, then did it again on his next turn before adding Prognostic Sphinx and leaving two mana up.

Cifka maps out a way to overcome his opponent's controlling start.

It was only the fourth turn and things looked good for the control deck.

But Cifka was ready to move, with Dragon Mantle and Gods Willing on Akroan Crusader – the Willing protecting it from Rietzl's Bile Blight – before finally adding Dragon Mantle to Phalanx Crusader, ending his turn with eight power of creatures.

Rietzl attacked with his Sphinx to scry and set up playing and using Kiora to draw and ramp. Feast of Dreams tried to kill Phalanx Leader but another Gods Willing upped Cifka's creature total to twelve power.

Then Launch the Fleet made Cifka's army even bigger.

"Thanks. You too," Rietzl replied as he left the feature match area for the last time of the weekend.