Round 14: Antoine Ruel vs. Oliver Schneider 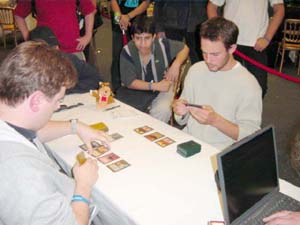 Antoine was, unusually, sporting a two-color deck which is relatively rare in this format (black-red) whilst Ollie was running a three color bear deck (blue-red-white).

Ollie won the toss and elected to play first, but the first play was not until a turn 3 Galina's Knight. Antoine responded with a Nightscape Familiar, but then had to face a Lightning Angel - which he subsequently Terminated.

Ollie tried it on with another Angel, but the Frenchman had a second Terminate in hand, and a flier of his own: a Blazing Specter that forced Ollie to discard an island. Playing out his entire hand the Englishman then made two more bears: Galina's Knight no. 2 and a Goblin Legionnaire. Unfortunately for him, Ruel had the Void in hand, and Ollie's creatures were savaged (the Specter was killed by the Legionnaire).

In what turned out to be a totally abusive draw, the Frenchman then smashed his opponent with a Skizzik and another Blazing Specter and Ollie swept. 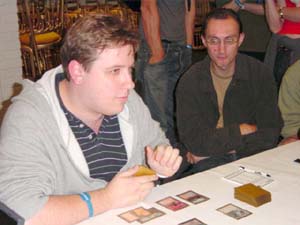 Again Ollie elected to play first and made a Lashknife Barrier on turn 3, followed by a Galina's Knight on turn 4. Ruel, also slightly behind on plays, made a turn 4 Phyrexian Rager.

Despite the Rager on the table Ollie decided to 'Ice' Antoine's only black source on the table, then cast a Lightning Angel which came through for a turn before being 'Voided' on the next (naming 4). Ruel was disappointed to see that Schneider had a total of 5 2 casting cost cards in both his hand and on the board. Amusingly, a turn later, Ollie had 2 Fire/Ice and chose to again tap the two black sources his opponent had in his upkeep.

With 2 Galina's Knights and a Goblin Trenches on the board Ollie had the game totally sealed, and a turn later Antoine conceded. 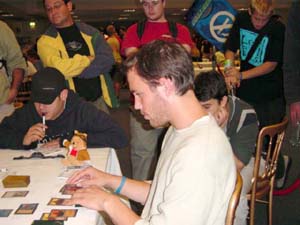 With both players wishing each other good luck they began the third game with Antoine making the first play - a turn 2 Addle naming 'white': this revealed a Meddling Mage, 2 Goblin Legionnaires and a Rage. He took the Mage.

Things started looking pretty ugly for the Englishman when the arrival of a Crypt Angel doomed the imminent arrival of the same Skizzik again, so Ollie paused for thought for a bit. For a big bit... The decision was then made to cast Urza's Rage on the Crypt Angel, then Ollie passed the turn.

Sure enough the Skizzik hit the table, which Ollie double blocked with his Legionnaires, then prevented the damage to one of them - killing the Skizzik. Another Captain's Maneuver was not enough to save Ollie as his opponent then made a second Pyre Zombie, and a second Shivan Zombie.

In the end, all the "Protection from White" creatures proved too much for the poor Englishman and Antoine won 2-1.