Round 14: Anton Jonsson vs. Nicolai Herzog 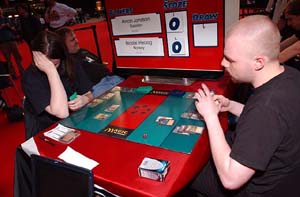 The final round threw up an all-Scandinavian clash. At stake is one of the remaining places in the Top 8. Jonsson in a Swedish player who broke out with a Top 8 appearance a Pro Tour New Orleans. Nicolai Herzog is a former European Champion who was part of the Norwegian national team that finished runner-up to USA last year.

Anton Jonsson has a very fast red-green deck while Nicolai Herzog has a white-black deck that received no help from Torment.

Jonsson went first and his fast red-green deck obligingly spat out a Mad Dog on turn 2. He couldn't follow this up with a third turn play, but neither did Herzog and Jonsson increased the pressure with a Springing Tiger.

Herzog attempted to stem the pressure with a Nomad Decoy. Jonsson hoped to really turn the screw by summoning an Anurid Scavenger and then killing the Decoy with a Sonic Seizure. Herzog had a Pay no Heed and the Decoy survived.

Herzog ensured the Decoy would stay around for a while by enchanting it with Shade's Form.

Then things went really wrong for the Swede when he forgot to pay the upkeep on the Scavenger. Only Jonsson noticed but he put the Scavenger in the bin as soon as he realised his mistake.

It had lost him vital pressure and allowed Herzog an opening to get back in the game. The Decoy killed the Mad Dog by preventing it from attacking.

Jonsson had to spend time building up his forces by adding Nantuko Disciple, Werebear and Diligent Farmhand to his Tiger.

Herzog hadn't found any more creatures and was starting to feel the pressure building again.

It exploded with a Rites of Initation fuelled alpha strike simultaneously giving Jonsson threshold for his Werebear and Tiger. Herzog managed to survive with an Embolden but was still in desperate danger.

Jonsson kept topdecking monsters and eventually his threshold giants crashed through to complete a recovery from his mistake.

In game 2 Herzog got the start he wanted with a turn 2 Patrol Hounds. Unfortunately Jonsson had the removal he wanted and the Hounds perished to a Sonic Seizure and then Herzog's Mystic Familiar met the same fate in response to him trying to enchant them with Shade's Form.

Jonsson then tried to get the damage rolling with a Mad Dog only for it to be forced to run into a much larger Testament of Faith.

Herzog had the answers this game. Jonsson's Lithatog was sucked under a Faceless Butcher. His Springing Tiger got crushed by a Sandstone Deadfall and then an attempt to burn out the Butcher was thwarted by a Pay no Heed.

Jonsson seemed unwilling to roll over as Liquid Fire finally recovered his Lithatog and he gave it company in the form of a Wild Mongrel.

It wasn't good for the Swede though as Herzog summoned two Nomad Decoys to lock up the ground and a Mystic Crusader to hit back with.

A Lithatog got through and gobbled up some land to break one of Herzog's defences – an Angelic Wall.

The game was fast becoming locked up. Herzog had threshold for both Decoys, the land to use them, a Hallowed Healer to save his creature and a Mystic Crusader to attack with. Jonsson's concession was not long coming.

The game had to go to a third game thriller.

Importantly Jonsson got to start first and got a Mad Dog on turn 2. Herzog had also found early plays – Testament of Faith and Mystic Visionary.

The Visionary stepped up to take down the attacking Dog only for Jonsson to save it with Refresh.

Jonsson finally got an opportunity to slip damage through when Herzog tapped out to summon a Hallowed Healer. Normally only a speed-bump against red-green, the Healer stuck around this time as Jonsson chose to summon a Nantuko Disciple.

Herzog answered this with a Braids and chucked out a Patrol Hounds and Mystic Familiar to feed her.

Jonsson caused the Healer to club itself to death with a Crackling Club and started swinging with the Dog and a Diligent Farmhand. He brought in an Anurid Scavenger to keep Herzog's creatures away while the steady erosion of permanents to Braids continued.

With enough mana to make the Testament huge Jonsson started to follow Herzog's strategy and feed his little guys to Braids. A stand-off followed as Braids fed the Scavenger, which recycled cards to the bottom of Jonsson's library.

Herzog attempted to enchant Braids with Shade's Form and Jonsson quickly tried to take her out with a Sonic Seizure. Herzog had a Shelter to save her and the match continued to stay interesting.

Jonsson took the opportunity of Herzog being tapped out to send the Scavenger through and pump it to leave Herzog on 8 life.

Herzog sac'ed a land to Braids and then summoned a Faceless Butcher to steal Jonsson's Disciple and more importantly leave himself with eight permanents (4 land, Braids with Shade's Form, Testament of Faith and the Butcher) to Jonsson's four (3 land, Anurid Scavenger).

The Top 8 was close enough for the Norwegian to taste.

Fate can deal a cruel hand sometimes and this thriller of a game still had a final twist.

In his upkeep Jonsson put the upkeep effects on the stack and tapped a forest for green mana before sacrificing the forest and putting a card on the bottom of his library. He then cast Muscle Burst, giving +4/+4 because of the Farmhand in his graveyard. He then drew a card, giving him two in hand and tapped the remaining mountain to cast Rites of Initiation. The one remaining card in his hand was enough to give the unblockable Scavenger exactly 8 power. Enough to wreck Herzog's dreams of making the Top 8.