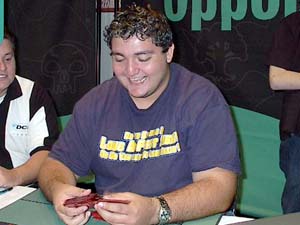 Teammates, best friends, Italians… all three are true descriptions of these two gentlemen. Gerard actually flew down earlier this week to hang out with Antonino before the tournament, and now they are forced to play one another for one of the final slots in the top 8. It's a bittersweet situation, because at least one of them is guaranteed to make the elimination rounds, but there is no possibility that both can make it in.

This was an Affinity mirror match featuring nearly identical decklists. Gerard kept two somewhat questionable hands in both games and though he was able to stall the games out, he never quite recovered enough in either game to threaten for the win.

De Rosa won the die roll and after a deck check and a great deal of shuffling, he threw back his starting hand for a new six. Both Affinity decks started out surprisingly slow, with Fabiano playing out three Chromatic Spheres in the first two turns plus a Frogmite, while De Rosa merely cast an Arcbound Worker and a Thoughtcast. Turn 3 brought dueling Somber Hoverguards, as Gerard cycled all three of his Spheres to draw three cards and then cast Aether Vial.

A second Thoughtcast from de Rosa allowed him to keep up in the card drawing department, and delivered a welcome Arcbound Ravager just in time to make an impact on the game. With Gerard still stuck on two lands in spite of drawing five extra cards thus far, De Rosa's Disciple plus a second Ravager on the next turn were definitely "big game." Turns slowed to a crawl as each player calculated combat math ten different ways, and though Gerard used his Aether Vial to good effect, Antonino's huge men proved too much.

"God, I took out the Aether Vials because I always forget to put the counters on them. This deck is so hard." 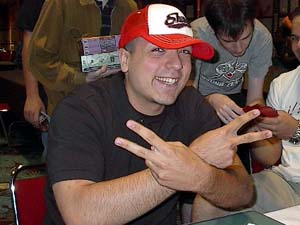 Fabiano shocked the crowd by choosing to draw for game 2. De Rosa showed he was lying about siding out is Vials, casting one on turn 2 to go along with a Chromatic Sphere and a Frogmite. Gerard played an early Atog, which is usually pretty strong in the Affinity mirror, but Antonino's start was much faster, and even though removal flew from both sides of the table, De Rosa was always ahead on damage and permanents and guaranteed himself a slot in the top 8 with the victory.