Would you rather be the one to ask the questions, or the one struggling to come up with the answers? For Josh Utter-Leyton, the only good questions are the ones left on the table.

It took less than twenty minutes for Josh Utter-Leyton and his Boros Blitz deck to mow over a frustrated Reid Duke, moving to 11-3 and keeping his Top 8 hopes alive in the process.

Despite mulliganing into oblivion and getting absolutely drubbed in the first game of the match by Utter-Leyton, Duke was still nice enough to offer the traditional game ending to his opponent. Even Utter-Leyton sympathized with the way things broke for Duke.

"If you want to call it that," Utter-Leyton responded with a grimace. 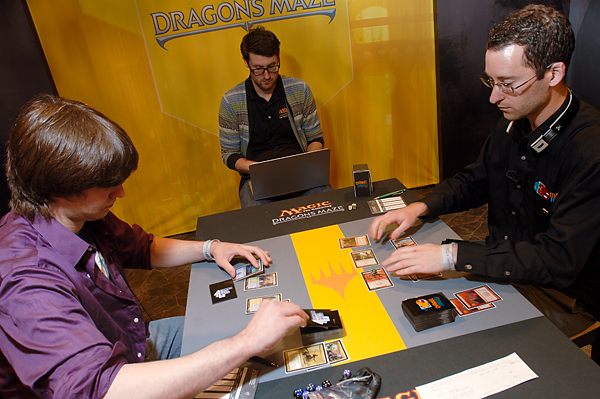 Reid Duke's Bant Control has a lot of powerful cards, but Josh Utter-Leyton's Boros Blitz deck blasted through Bant in this match.

The first "game" lasted under five minutes, and at least three minutes of that was spent resolving Duke's mulligans. Ultimately, he kept a hand with Temple Garden, Selesnya Keyrune, Supreme Verdict, Sphinx's Revelation, and a random fifth card.

"I figured that keeping a hand that could cast Supreme Verdict if I could draw a couple lands was much better than mulliganing again into a hand that couldn't," he explained to Utter-Leyton after the match.

Utter-Leyton completely agreed with the decision. Still, though the game was clearly a miserable experience for Duke, games similar to this are what Utter-Leyton's deck thrives on. Boros Blitz and the other ultra-aggressive decks in the format exist to capitalize on stumbles that opponents make, be it failing to draw a Supreme Verdict early enough, missing a land drop or two, or mulliganing to five, as in this case. 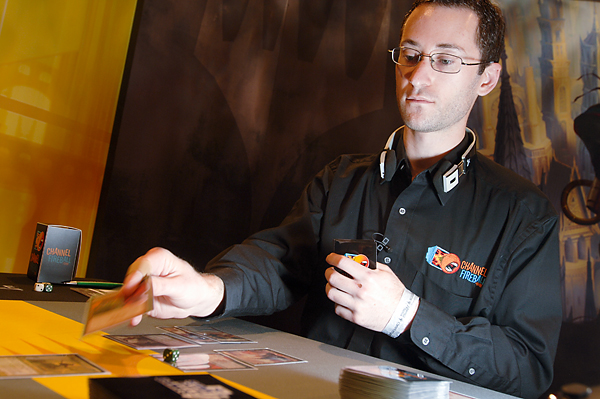 Utter-Leyton's deck is fast enough to punish any opponent who stumbles with their draw.

His deck performed that task a second time in the second game of the match. This time, things went a little better for Duke. His opening seven cards gave him a bevy of great cards in the matchup, including Loxodon Smiter and a duo of Centaur Healers. He even managed a fifth-turn Supreme Verdict to clear the board while at a reasonably safe life total. Unfortunately, his deck began to provide land after land soon thereafter, while Utter-Leyton was fed threat after threat. Soon, the flood became too much for Duke, and he succumbed to a lone Firefist Striker.

"We spent the game trading one for one, and he ended up flooding while I drew three lands and all spells," Utter-Leyton said, attributing his win to an overabundance of lands on the behalf of Duke.

Duke certainly agreed, but he pointed to one key moment that prevented him from taking a big lead over Utter-Leyton.

"The key turn in that game was when he managed to kill my Jace before I could get any card advantage off of it," he said. 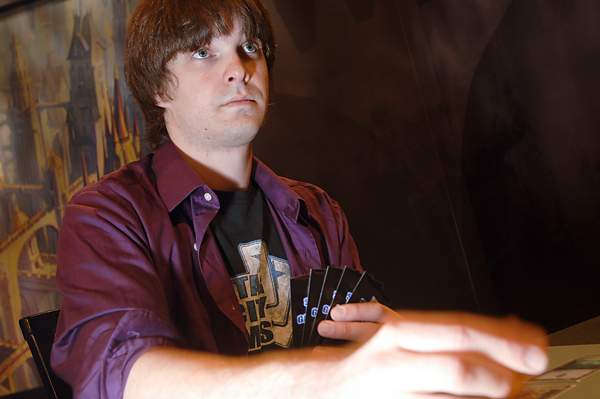 Duke tried to stay in the game, but his draws were unable to provide him the defense needed to stave off his opponent's attacks.

[r14_duke.jpg cap="Duke tried to stay in the game, but his draws were unable to provide him the defense needed to stave off his opponent's attacks."]

The turn in question occurred just after a Supreme Verdict had cleared the board. Utter-Leyton was low on cards and had nothing on the board. He drew and played a Legion's Initiative and a Legion Loyalist, attacking for 2. Duke untapped and put a Jace, Architect of Thought, into play, immediately gaining loyalty to both kep him safe and blunt Utter-Leyton's attack. Unfortunately for Duke, he was never able to get another activation, as Utter-Leyton used a Boros Charm and another attack to take care of Jace before things got out of hand.

This was incredibly important to Utter-Leyton's victory, as Duke soon revealed a pair of Detention Spheres in his hand, one of which removed a pair of Loyalists from play no less than a turn later. Had he been able to make that play with a Jace still in play, it is unlikely that Utter-Leyton would have been able to close things out.

Sitting at 11-3, Utter-Leyton is still eyeing a Top 8 berth, while Duke's fourth loss will very likely relegate him to a Top 16 finish at best.

The finish of this tournament is very important for the outcomes of a couple of important milestones.

First, a Top 16 finish has a good chance to put Reid Duke into one of the at-large slots at the World Championships later this year.

In addition, a Top 24 finish will secure Platinum Pro Club status for Duke next year.

Duke called a judge over to check the wording on Legion's Initiative. After conferring with the judge, Duke chose to sideboard in a Cyclonic Rift to combat the enchantment.

"Since it returns the creatures at the beginning of the next combat, not just your next combat, I figured I could cast it at the end of his turn. If he sacrificed it in response, his creatures would come back during my attack, and I could clear the board with Supreme Verdict," Duke explained. "In retrospect, I don't know how good an idea that was. I almost wish I'd kept in another expensive spell like Syncopate instead. But I'm not sure."