Round 14: Carlos Barrado vs. Anton Jonsson 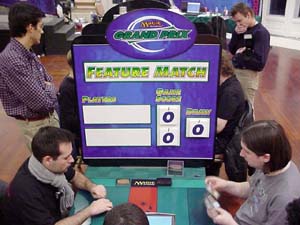 This is the round they have been fighting for: a final chance to make it to the Top 8. On both sides of the Feature Match table there is a member of Team Punisher playing for the Top 8. On this side we have Anton Jonsson, fresh of a Top 8 in Pro Tour New Orleans.

As we have said before Carlos Barrado is one of Spain's mainstay players, with a national title and a Grand Prix title (in Madrid) in his curriculum. As always he has a big crowd cheering from him, albeit very silently for Latin players.

They both started of with bears, Carlos with two Wild Mongrels and Anton with its lesser kin Patrol Hound. Tired of simply playing hounds they moved into more tricky stuff: Barrado dropped a Cephalid Scout and the Swede a Hallowed Healer.

A Seton's Desire made the Scout a perfect flying bomber and when Barrado sent his crew in both White creatures jump up to block. A discarded Scrivener saved the Mongrel.

Despite Anton's desperate attempts his deck refused to help him out and he was forced to concede the game to the Mongrel duo-beefed up Scout. Barrado's start was to fast for Jonsson's lumbering draw.

Barrado had to take a mulligan and after some deliberation kept his second hand. Despite this stumble he still came out strong with a second turn Mongrel while Anton what to wait until his third turn for his first creature, although is was worth the wait, Hallowed Healer.

Kirtar's Desire kept Mongrel of the Red Zone and the Healer got cheeky an attacked. Fearing a trick Barrado took the damage and use an Aether Burst to free up his Mongrel seen he was hard pressed for another castable creature.

Jonsson took advantage of this to take over the table with a Dreamwinder (that could attack normally) and a Sandstone Deadfall. Barrado fought back with a second Aether Burst cleaning the Swedish army but he couldn't capitalize on that tempo advantage.

A fifth land finally allowed him to play his Scrivener getting back one of the Aether Bursts while Anton rebuilt his creature base, this time with a Aven Flock following the Healer.

The Flock blocked the incoming Mongrel and Barrado discarded a land just to bring it back with Cartographer. If his deck still wasn't working at full speed at least his supporting crew grew by the minute with more Spanish players converging on the feature match area.

When Anton replayed his Dreamwinder he also dropped a Luminous Guardian but the recovered Aether Burst bounced both the Healer and the Dreamwinder. Just as the Swede thought the bouncing nonsense was over Carlos played a second Scrivener to bring back the cursed Aether Burst. His draw might have been slow but he was fighting to stay in the game as long as possible before the blue-white machine could take over.

The creatures kept piling in and despite bouncing his own Scrivener with the omnipresent Aether Burst Carlos could easily feel control slipping away from him. At seven mana he played a Stone-Tongued Basilisk that could give him an opening into the growing white wall of creatures.

But he wasn't the only one dropping bombs. Anton showed his Mystic Enforcer on the following turn. With time dwindling away and the loud screams of some insane French player in the background the only hope to end the game in the next minutes was Anton's ever-pecking Aven Flock.

Barrado had a way around Anton's defenses with a Seton's Desire on the Basilisk but the Sandstone Deadfall forced him to keep the beast back while the Aven duo (Windreader and Flock) used the Red Zone to bleed him to death. In fact the Swede army grew so big he couldn't fit in the Feature Match playing mat but the 5/6 Basilisk served as a good attacking dissuasion method. Slow and steady could win him the game while a random alpha attack might cost him the whole match.

One swing away from death Barrado sacrificed two lands to cast, yet again, the Aether Burst and sent the whole army in for an headache of a combat phase. He pumped his two Mongrels to get over Threshold. With the Basilisk now calling all blockers he had enough damage to finish the game.