Round 14: Chris Pikula vs. Olivier Ruel 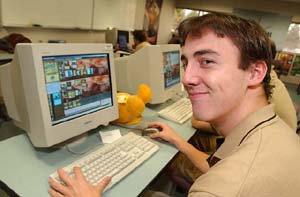 Last year, Olivier Ruel had the dubious honor of being the last-place finisher at the Invitational. History would have had it that he would have won a Pro Tour that season, but he had to settle for second at Osaka. This year he's improving on his record, standing 5-8 after thirteen rounds. His opponent, the affable Chris Pikula, has taken his place at 3-10. He desperately needs to win out for a hope at avoiding last place.

Pikula mulled a one-lander, then found himself with six and no forests. He kept. He pulled Careful Study, but had to spend Aether Burst on a Call token. Ruel didn't mind at all. He was free to play out his Opposition. When all Pikula could fire back was a Madnessed Arrogant Wurm, things were looking dire.

Ruel got in with Phantom Centaur. Pikula made a Merfolk Looter, consoling himself that he had an out with Aether Burst. Ruel tapped his blockers at end of turn and served for five before making two Looters of his own. Pikula's reaction was to be expected.

He Studied, saving himself mana for Circular Logic, and tried to be optimistic. "Some would say this looks bad, but..." He just trailed off. The Phantom brought him to ten. Still, he was hitting back for damage, and Ruel was soon at eight. Looter did not turn up Aether Burst, and Pikula was dismayed. Another turn, and Ruel was tapping him down for the win.

Pikula started off the second game with Careful Study for Basking Rootwalla, then Merfolk Looter. whatever illusions he had about that being a great draw were shattered when Ruel again came down with the nuts draw of Birds, Call, and Opposition.

Pikula sunk in his chair. A second Looter meant he'd have lots of chances to get at the cards he needed to break through, but it was demoralizing all the same. Eventually the board sat with Pikula's Looters, Rootwalla, Aquamoeba and Wild Mongrel opposite Ruel's pair of Birds and two Elephant tokens. 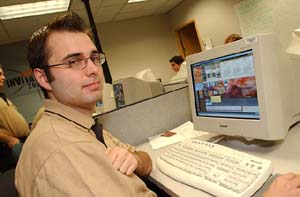 Ruel threatened to attack with his Elephants, and Pikula leaned forward, hoping he would err. He sent just one, playing it much more safely.

"You'd think I could draw Aether Burst or Naturalize at some point." - Chris Pikula

But even with two Looters his draws did not co-operate. Ruel continued to make creatures and sneak in for damage. It was slow going, he'd draw a lot of land. Pikula was doing the same, and became more and more incensed at the top of his deck. Shouting, "For the love of God, NATURALIZE!"

Soon there was no way out. The final point was done, shamefully, by his own City of Brass.

"This is just like that no-Wonder game. Two Looters, halfway through my deck. You can't win." - Chris Pikula