Round 14: Cloudy with a Chance of Death

This was set to be a knock-down, drag-out brawl as these two giants of European Magic approached the feature match area. Both members of the Magic Hall of Fame, their contributions to the game have been too numerous to list.

Snepvangers, sporting the Hall of Fame ring he got a couple of years ago, earned his spot in the Hall thanks to his relentlessly consistent play. It didn't matter what event you were at. If he was in the tournament, he was always somewhere near the top. While the major hallmark wins eluded him for the most part, showing the level of consistency that he did over his long career is something of a statistical improbability. After all, high-level competitive Magic can be, shall we say difficult? 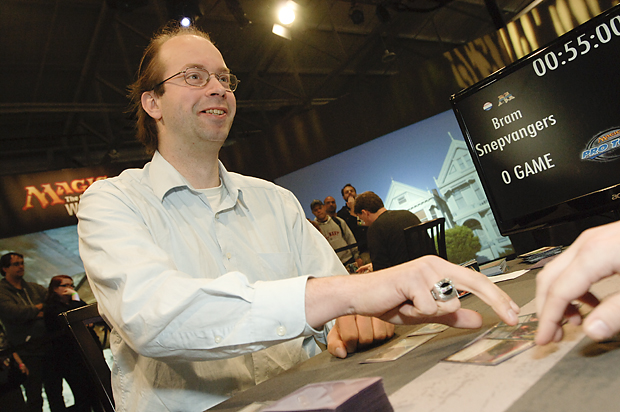 Bram Snepvangers shows off his Hall of Fame ring.

Across from him, Sweden's Anton Jonsson, inducted a mere two days ago, earned his place through his 40-card skills. One of the first Limited specialists in the game's history, Jonsson is one of only three players to make Top 8 in back-to-back Pro Tours in the same Limited format. Proving that his skills haven't diminished, he went on to a 5-1 performance in yesterday's Innistrad Draft.

"What have your records been the other days?" Jonsson asked while shuffling.

Snepvangers decided to mulligan his opening hand, prompting Jonsson to laugh, "Well, I guess there's my free mulligan. I bet you had the nuts, too, but you knew that you owed me."

"Well, I think we're about done discarding everything," Snepvangers joked as he put his final discard spell into his graveyard. With spells out of the question, Jonsson tried to start attacking with lands, animating his Creeping Tar Pit and attacking, but Snepvangers simply destroyed it with Tectonic Edge. This game was going nowhere slow. Snepvangers added a Treetop Village to his side, which could live through the Punishing Fire Jonsson was holding, and it looked like it would be the first real threat of the game. He activated it and attacked, dropping the land-damaged Jonsson to 14. After the attack, Snepvangers passed the turn.

Jonsson thought for a minute about his play before dropping a land onto the battlefield and saying go. Snepvangers played a Kitchen Finks before attacking on the next turn. Jonsson used Punishing Fire at the end of the turn to kill the Finks the first time, but neglected to get it back when they came back to the battlefield. Snepvangers's creatures attacked Jonsson down to 1 before he managed to use a Cryptic Command to tap the creatures and draw himself a card. He found nothing of help, and Bram's creatures finished the job on the following turn. Anton was not pleased with his play that game, shaking his head and muttering, "So stupid," as he shuffled up his cards.

Snepvangers's attempt at a first-turn Thoughtseize was stopped by a Spell Pierce, causing him to simply shrug his shoulders in aceptance. His next play was a Nihil Spellbomb, showing his respect for the power of Snapcaster Mage. Kitchen Finks followed after that for Snepvangers, Jonsson content to play the control role and just draw some cards and see where things go. Snepvangers attacked for 3, dropping Jonsson to 15. After combat, he tipped another attacker onto the board, the elusive Treetop Village. At the end of Snepvanger's turn, Jonsson used a Cryptic Command to return the Finks and draw a card, untapping only to draw and play a land. 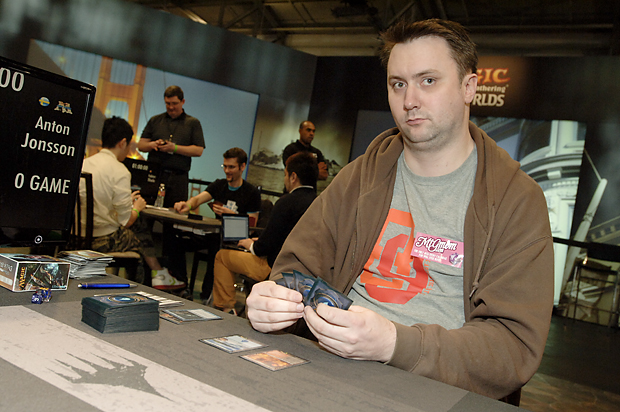 Snepvangers decided to aim a Thoughtseize at Jonsson before making any moves, drawing a Cryptic Command out of Jonsson's hand. Eternal Witness followed, getting Snepvangers back the Thoughtseize. He really wanted to see what Jonsson was protecting. This time it resolved, stripping a Cryptic Commnand from a hand with Snapcaster Mage, Mana Leak, and Lightning Bolt. Jonsson aimed the Bolt at Eternal Witness at the end of the turn, leaving Snepvangers with only a Treetop Village on the battlefield. Continuing his trend, Jonsson simply drew, played a land, and said go. Snepvangers kept adding threats, casting a Kitchen Finks with three mana open. Jonsson thought for a minute before deciding to Mana Leak it. Snepvangers quickly paid. Jonsson knew he'd have to make Snepvangers crack his Spellbomb at some point, and decided to cast his Snapcaster Mage. Snepvangers took away the Snapcaster's toys, and Jonsson was forced to let the Finks resolve.

Snepvangers was up on cards and life, with the better board position. It looked like the game was his, at least for now. When he cast Death Cloud for 4, it more or less sealed it. He was able to keep his Treetop Village and the lands to activate it, as well as a persistent Kitchen Finks, while Jonsson was left with merely two lands. It only took one more turn for Jonsson to admit defeat at the hands of his fellow Hall of Famer.

4 Garruk Wildspeaker 2 Liliana of the Veil