Round 14: David Weitz vs. Brian Kibler 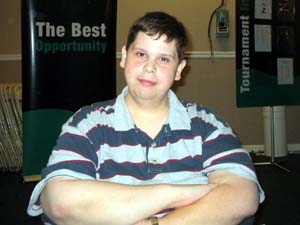 Weitz is a 28-year-old from Youngstown, Ohio who has been on the Pro Tour four times before -- mostly in the olden days. His opponent is none other than the Dragon Master, Brian Kibler. Kibler is one of the more prominent faces of Magic these days, and is coming off a strong Top 8 finish at U.S. Nationals. Lately he has been complaining about playing poorly, but as of right now he still has a chance to Top 8.

With two more rounds of swiss to go, each of these players probably need to win out in order to make the top 8 (the size of the tournament has definitely done a number on everyone's math calculations for the top 8). Interestingly, neither Weitz nor Kibler has a loss yet today. Both players won elimination matches to end Day 1 and have run the table ever since. Weitz was playing the G/R Freshmaker deck designed to hate away Affinity, while Kibler chose to run the pro's gold standard of Vial Affinity.

Kibler was positively kinetic to start the match, as he is wont to be when he's on a roll. Weitz used a Wayfarer's Bauble to search out a Forest to go along with his two Mountains, causing Kibler to quip, "So what you're saying is this is a Mentos commercial." Weitz's Molten Rain on Brian's Blinkmoth Nexus was the first damage of the game, as Kibler started slowly, mostly building a monster hand through a Chromatic Sphere and two Thoughtcasts.

A turn later, everything changed, as Weitz chose to Bolt Kibler's fresh Ravager. Kibler responded by putting a Rigger into play off an Aether Vial, and then sacrificing a bunch of artifacts, leaving him with a single land, Cranial Plating, a 5/5 Ravager, and a 6/6 Rigger. The two monsters proved too large for Weitz to handle, and he scooped after another attack step.

Game 2 started out solidly for Kibler, but he lacked most of the action cards Affinity needs to win against Freshmaker (such as Moriok Rigger, Atog, and Arcbound Ravager). Fortunately for Kibler, Weitz was stuck on three land.

"This is not so fresh," complained Weitz, as he was forced to Fireball away Kibler's Frogmite. "I'm just happy you haven't exploded yet." 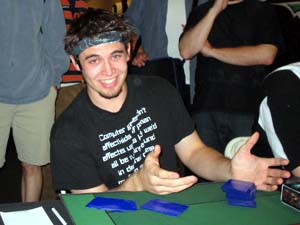 "Oh, I'm about to." Kibler cast two Thoughtcasts, then cast an Arcbound Ravager to go along with his Disciple that was already on the board. Weitz cast a Simulacrum and passed the turn. Kibler untapped, counted the artifacts on the board (seven), and showed Weitz the Shrapnel Blast in his hand, doing exactly enough damage to make sure Weitz would not get to draw another card.

"What was the rest of your hand?" Kibler asked after the match. "I had triple Jens and Arc-Slogger," Weitz answered, "but just couldn't find a fourth land in time. My opening hand included two Magma Jets though, so I had to keep."