Round 14: Dirk Baberowski vs. Andrew Wolf 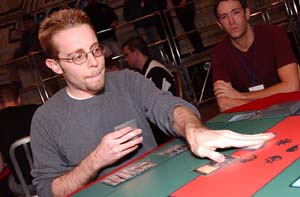 Dirk Baberowski informed me before the match that no German has ever made Top 8 at a Californian Pro Tour. His theory is that it's the jet lag ... "it's really bad. Of course, it could be that we just suck." His opponent, Andy Wolf, assured him they didn't suck. Baberowski has made three Pro Tour Top 8's and won two of them, including the team Pro Tour earlier this season. Wolf made the Top 8 at PT LA #3 (back in 1998) with a mono-black Tempest-block constructed deck.

You can read about their draft here. The key moment in the draft came when Wolf opened up Cabal patriarch in the 7th pack. He chose to switch into black rather than pass it to Baberowski. Each has won their previous two matches with these blue-black decks and Wolf could clinch the Top 8 with a draw, but Baberowski needs 2 points so they have to play. 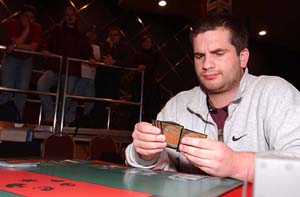 Nothing much happened for the first five turns of the game, but once Wolf was able to keep a creature in play, he adopted a tempo based strategy. He kept bouncing Baberowski's creatures and serving with his Childhood Horror. Baberowski stabilized at ten life thanks to Morbid Hunger, but then Wolf drew his second Aether Burst. He used it to bounce his Scrivener and Baberowski's Aven Fisher every turn, clearing a path for his Childhood Horror and Dusk Imp. Baberowski eventually got to 8 mana and could play two Fishers on the same turn. That slowed Wolf down long enough for Baberowski to get Chamber of Manipulation into play. Wolf attacked anyway - he lost three guys, but he knocked Baberowski down to two and used Gravedigger to retrieve his lost Scrivener. Baberowski failed to draw the ninth land he needed to flash back Morbid Hunger so Wolf's Scrivener got Aether Burst, which cleared a path for a final, fatal attack.

Now that he was down a game, Baberowski reassessed his odds. There were a couple of scenarios where a 31-point player would get in and Baberowski expected to have the best tiebreakers, so he figured his odds of getting in that way were higher than his odds of coming back from down 0-1 against what sure looked like a better blue-black deck.