Don Gallitz has been waiting a long time for this moment. He's played in more Pro Tours than just about anyone in the room, yet no match may be as important to his legacy than this one. Gallitz is currently the holder of the dubious record of "most Pro Tour points without a Top 8," and he'd like nothing more than to unload that monkey onto his former Tongo Nation teammate, Pete Leiher.

In his way is French Rookie Farid Meraghni who is already guaranteed a place in Sunday's action. Were the youngster a historian and fan of the Pro Tour like so many of us are, he might bow down and simply offer his slot to the veteran Gallitz. But true victories must be earned, and this was no exception. Game on.

Meraghni kept a one-land hand and failed to draw a second for several turns. Gallitz's start wasn't exactly explosive, however, and Meraghni managed to draw land #2 and play an Angelic Wall before Gallitz could draw blood. Once Gallitz got to four, however, a steady stream of fliers poured from his hand, and Meraghni could do little about it.

The Frenchman finally drew enough land to put out a Wild Mongrel and a Mystic Zealot, which would allow him to block and kill some of Gallitz's air force. But the American pressed on, using Shelter to keep his creatures alive.

Gallitz had a Psionic Gifted Auramancer that was also slowly working on the Frenchman's life total, but a Seton's Desire on the Wild Mongrel started to make the game interesting.

Gallitz drew Aether Burst and Scrivener to keep Meraghni backpedaling, but the Frenchman had a trick of his own, specifically Moment's Peace. But in the remaining few key turns, Donnie kept drawing creatures and Farid drew lands, allowing Gallitz to punch through.

Surprisingly, the game was a real battle even though Farid did nothing for the first four turns. I'm sure Gallitz will be wary in the other game(s).

Farid started in with the beats - turn 3 Krosan Avenger, turn 4 Springing Tiger - but Gallitz had Aether Burst and Kirtar's Desire to slow him down.

Each player brought out Hallowed Healers, and Gallitz thought he had Farid trumped by casting a Psionic Gift on his Dreamwinder. Farid's Healer was shot down, but then Farid regained the upper hand with Aura Graft, and returned the favor on Donnie's Healer.

Gallitz had a second Gift, however, and played it on his Dreamwinder again. Each player planned on pinging the other, until Gallitz broke up that little game with a Ray of Distortion followed by an Auramancer to get real Gift superiority. Even Farid had to chuckle at the bizarreness of the play. 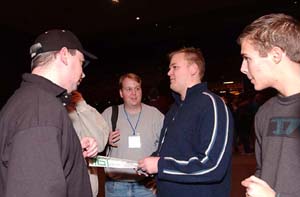 Farid played out Animal Boneyard, half of his deadly Animal Boneyard/Chamber of Manipulation combo. Gallitz promptly drew Aven Cloudchaser to blow it up, averting any long-term disasters.

Farid tried to rally by Seton's Desiring his Krosan Archer, but Gallitz flashed back the Ray of Distortion (I have never seen that card work so well). The two Gifted creatures kept up pinging, and Farid eventually succumbed.

As Meraghni extended the hand, the room of Pro Tour veterans that have known Don Gallitz for years and watched him come SO close to achieving this benchmark, erupted into screams and applause.