Round 14: Double Your Fun

Joshua Hakakian was playing in his second Pro Tour here in Philadelphia and had an impressive 30 points heading into the round. Brian Demars, also with 30 points, is a much more seasoned veteran and was relatively fresh off the Top 16 finish at Grand Prix Providence that qualified him for this event. Both players were on course to make a Sunday appearance. Who would continue the trend?

Hakakian won the roll and chose to play first. He kept his opening seven cards, while Demars mulliganed to six. 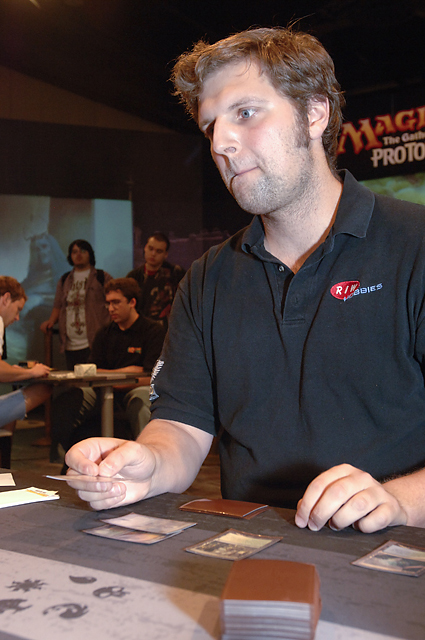 Brian Demars fights for a shot at the Top 8.

Hakakian's next actions were playing a Steam Vents tapped alongside Spellskite. Demars summoned Kavu Predator before targeting Spellskite with Oust. Oust resolved, Hakakian gained 3 life and Kavu Predator gained three +1/+1 counters. Hakarian played his fourth land and ended his turn. Demars attacked Hakakian down to 11 with Kavu Predator, then attempted a postcombat Green Sun's Zenith for two. Hakakian flashed in Deceiver Exarch, untapped an Island when it entered the battlefield, then used Remand to send the Zenith back to Demars's hand. Demars had to settle for Tarmogoyf instead. Hakakian untapped, drew his card and played Splinter Twin on his Deceiver Exarch. With the game-winning combo successfully deployed, we were on to

Demars and Hakakian started with Misty Rainforest and Scalding Tarn respectively. Demars sacrificed his Misty Rainforest for untapped Stomping Ground, played an untapped Temple Garden, then cast a Tarmogoyf. Hakakian laid a second Scalding Tarn and ended his turn. Demars added Horizon Canopy and Seal of Primordium to the battlefield. An attack from a 1/2 Tarmogoyf set the life totals to 15 and 19 in Hakakian's favor. At the end of the turn, Hakakian double searched with his two fetch lands for two Steam Vents. Hakakian, generally content to do nothing on his turn, played a Mountain and passed. On Demars's next turn, Hakakian flashed in Deceiver Exarch, depriving Demars of his only red mana source. Demars cast Green Sun's Zenith for zero retrieving Dryad Arbor from his library. Hakakian's first sorcery of the match turned out to be Slagstorm. Demars used Path to Exile to exile Deceiver Exarch keep his Tarmogoyf alive. Demars attacked Hakakian down to 11 with a 4/5 Tarmogoyf. Green Sun's Zenith for two added a second Tarmogoyf to Demars's team. Hakakian laid a Misty Rainforest and passed the turn with six mana available. 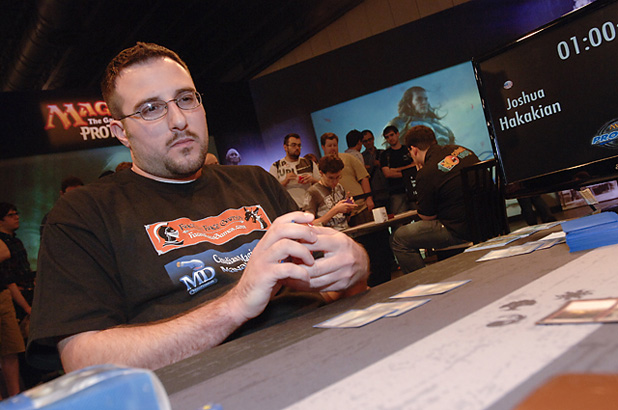 On Demars's next turn, Hakakian cast Deceiver Exarch to again deprive Demars of his only red mana source. Demars had Beast Within in response to destroy the Deceiver Exarch and leave a 3/3 Beast token in its place. Still in Demars's upkeep, a second Deceiver Exarch hit the battlefield for Hakakian and untapped Steam Vents. Demars attacked with both Tarmogoyfs , one of which was blocked by a beast token, sending Hakakian down to 6 life. Hakakian life had dwindled pretty low, but that didn't matter, as he had Kiki-Jiki, Mirror Breaker to complete the combo.