Round 14 was supposed to be my break round, time spent wandering the venue checking out stories on the floor and catching some refreshments. But when Brandon Scheel and Marijn Lybaert, both close friends of mine, were called to the feature match area to do battle, I knew my break would have to wait. I couldn’t miss this one.

As the two players joked with each other about a common bond from being associated with the coverage reporter recording their match, Marijn piped up with a request. 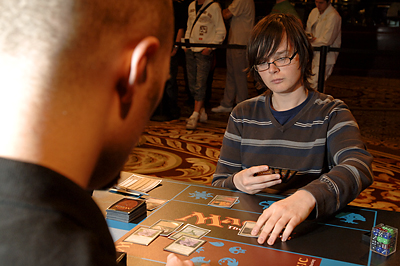 Marijn Lybaert is hungry for another Top 8.Make sure to say hello to my girlfriend Kelly!” the cherubic Belgian said mischievously. “And my mom!” he added, before thinking better of it. “Wait, no, don’t do that,” he quickly sputtered, re-considering what his fellow gamers might think. Sorry Marijn, a card laid is a card played...

The competitors got their game underway with Brandon Scheel’s Doran deck coming out of the gates via its namesake Doran, the Siege Tower and Tarmogoyf. The Iowa native has been on a tear this Pro Tour season with a Top 16 finish in Kuala Lumpur and a re-dedication to the game he has spent considerable effort on over the past few years. Marijn killed the Tarmogoyf with a Skred before playing a Chameleon Colossus to get in the way of Scheel’s Doran.

Luckily for Brandon he had a trump in the form of an Oblivion Ring. The white enchantment allowed him to “kill” the 4/4 despite it having protection from black, something that protected it from many of Brandon’s other removal spells. A Kitchen Finks from Lybaert chumped the Doran and left the life totals at 20-13 in favor of Brandon Scheel. A second Finks for Marijn brought it to 20–15 when the American opted to make an odd play. At the end of Marijn’s turn he tapped his Gemstone Mine to mana burn for a single point of damage. That brought a pause from Marijnm who said, “Hold on, got to figure this one out.” After considering the board for a few moments he said, “Okay, I don’t get it,” and simply recorded the change in life totals.

On his turn again Brandon revealed what was going on. Tapping the Gemstone Mine again and removing the final counter from it, he placed the land in his graveyard. A Profane Command gave his creatures fear and his Gemstone Mine netted him an additional point of damage by pumping Tarmogoyf from the grave, and Brandon’s all-in attack left Marijn at just 1 life. Struggling to crawl back into it, Lybaert played yet another Kitchen Finks, but things weren’t looking good. Scheel continued to bash and Lybaert desperately sought a solution of some type. When a cycled Edge of Autumn didn’t provide the answer he was looking for, he scooped ‘em up.

Marijn kicked Game 2 off with a Highland Weald, and Brandon opened on Thoughtseize. His opponent revealed a hand with two Wall of Roots and only one other land, Mouth of Ronom. It was certainly a risky keep, and when Lybaert pointed at one of the Walls as the right target for his opponent’s Thoughtseize, Scheel nodded tacitly, ignoring more powerful spells like Garruk Wildspeaker and Chameleon Colossus in order to stunt Marijn’s mana base. The Belgian Lybaert simply played his second copy of the 0/5, but Scheel had an answer to that as well in the form of an evoked Shriekmaw.

Luckily for Marijn, he managed to find a “land” on the top of his deck in the form of an Into the North. When he hit his fourth-turn land drop as well with a Highland Weald, Lybaert could only shrug and mutter “Awkward...” If Scheel felt it was awkward his opponent had managed to rip back-to-back lands or that the fourth one came into play tapped preventing the Belgian from casting a four-drop the Iowan wasn’t letting on. Brandon was clearly focused on beating down with a Doran, the Siege Tower, but Marijn answered with a main-phase Skred before playing Chameleon Colussus.

Oblivion Ring from Brandon dealt with the Colossus, but Marijn followed it up with a second. Scheel, meanwhile, made a new Doran by using Profane Command to return his original to play. Lybaert’s second Colossus munched a Treetop Village before he played a Garruk Wildspeaker and used the untap ability to add a Magus of the Moon to the board. The game was truly swinging back and forth and it was difficult to tell who was in the lead, but Scheel attempted to push things in his favor with a Shriekmaw hardcast on the Magus before crashing his Doran into Lybaert’s Garruk, killing it. The life totals stood 12–8 in favor of the Belgian, and Scheel was looking for any answer to the protection from black Colossus possible, going so far as to sacrifice his Horizon Canopy in an attempt to find a nonblack chump blocker for the 4/4.

He managed to do exactly that in the form of Birds of Paradise, but Marijn simply killed it at the end of Brandon’s turn with Mouth of Ronom. Devoid of any nonblack blockers and facing down 8 damage from a pumped Colossus, Scheel conceded.

Both players shuffled silently but it was clear from the match that they respected each other. During the second game, Marijn had pondered preemptively killing Shriekmaw during Brandon’s final combat step, but opted not to. The play clearly indicated he remembered his Mouth of Ronom and fully anticipated utilizing it, but Brandon attempted to survive the turn with his Birds of Paradise chump blocker anyway. The play wasn’t a sign of disrespect, but instead one that indicated how seriously the players took the competitive aspect of the game as well as the social. While their banter was friendly both expected to win and respected the fact that losing didn’t make them enemies.

“How much time is left in the round?” Scheel asked before taking a mulligan. A bystander from the large crowd of spectators informed him there was slightly over thirty minutes left.

Lybaert made the first play of the final game, though it was rather underwhelming as his turn-two Tarmogoyf was a mighty 0/1 thanks to the fact neither player had any cards in their graveyard. Brandon quickly remedied that situation with a Nameless Inversion killing the ‘Goyf. He then managed an attack with a Treetop Village, putting Marijn to 17.

With three Forests and a Treetop Village of his own, Lybaert was surely intending to make things interesting. He hesitated before making his fourth-turn play, considering whether a Kitchen Finks would lead better than Chameleon Colossus in the hopes his opponent would burn a removal spell early or whether it was safer to drop Colossus in order to protect it from Thoughtseize and get his beat on. He opted for the 4/4, but Brandon set him back by using Primal Command to tutor up Doran and return Lybaert’s Treetop Village to the top of the Belgian’s library. When the American followed up the next turn with Oblivion Ring on the Chameleon Colossus, he made it very clear he was in control of the flow of the game.

Still, Marijn wasn’t going down without a fight. He opted to play a Harmonize, looking for some gas to go alongside a Kitchen Finks already in play. 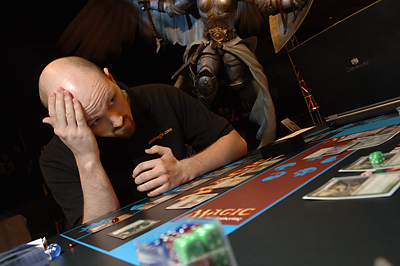 Brandon Scheel fights to hold on.”Come on Belgium!” came a loud cry from the audience. Stan van der Velden, one of Lybaert’s countrymen and the leader of the standings at the end of Day 1, had just joined the peanut gallery. While no one piped up on behalf of the American, Zack Hall, Sam Stein, and Ben Lundquist all watched on behind him, silently supporting their fellow patriot.

A series of Skreds from Lybaert dealt with Scheel’s Doran and Shriekmaw and left Marijn with enough mana to play a Garruk. Scheel tried to catch up on card economy by sacrificing his Horizon Canopy before using a Treetop Village to knock the Garruk down to one loyalty counter. Lybaert simply added a Chameleon Colossus to the board before upping Garruk back to two loyalty. In a match of back and forths, things had clearly shifted back to the Belgian.

Brandon calmly considered his options and opted to play another Doran. He took a damage from a Brushland to do it, a play that seemed odd considering he had a perfectly functional Birds of Paradise in play, but the talented pro quickly revealed why, as he attacked Garruk with the 0/1 flyer. Thanks to Doran the tiny Bird could actually make a dent in the mighty planeswalker’s armor, but Lybaert had yet another Skred to kill the Doran and render the play moot.

Still behind, Scheel could only watch helplessly as his opponent made things worse, attacking with Chameleon Colossus before playing a Grim Poppet and blowing up the Birds of Paradise on Brandon’s side of the field. The American had a second Oblivion Ring but only 5 life to work with. When Lybaert made two 3/3 Beasts over the course of two turns with Garruk, Scheel sadly saw the writing on the wall and extended his hand.

4 Skred 4 Magus of the Moon 2 Pyroclasm