won the toss and choose to start the game with a mulligan. Wolfgang kept his hand.

A Steel wall was made by Wolfgang, followed by Leaden Myr.
Jelger made a Gold Myr and the judge informed both players that the round had not started yet, so welcome to a little break in an already spectacular round... 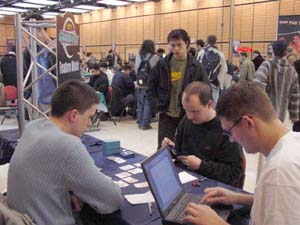 Skyhunter patrol was made by Jelger and it got to attack along with the Hunter to bring Wolfgang to 7. The Hunter was saved with a Predator's Strike when blocked by the Replica and the Replica was sacked for nothing.

Wolfgang took a moment to think of his next move and a Rustspore Ram entered play. Ramspore and Shrieker chump-blocked the Hunter and Skyhunter Patrol served for 2 through the air. Jelger added a Cathodian to the serving staff.

In Jelger's next attack, before blockers were declared, Wolfgang played a Betrayal of Flesh with entwine and returned the Shrieker, killing the Patrol in the process.
Shrieker got to attack for 3 and did that same trick 1 turn later too.

Yotian Soldier got a Leonin Scimitar, while Eder added another Shrieker and a Moriok Scavenger returned the Rustspore Ram. Jelger couldn't get enough airpower on the board and conceded the game.

Jelger got 7 cards and Wolfgang was fine with his too. Gold Myr and Goblin War Wagon were the first creatures on Jelgers side, while Wolfgang built a Scythe of the Wretched.

War Wagon served for three, and a Clockwork Condor on Wolfgang's side of the table was the blocker for the moment. Malachite Golem joined Jelgers team and in the next attack Jelger took a long pauze to observe the situation before making a decision to attack or not. Wolfgang had 1 red mana open.

War Wagon and Malachite Golem entered the redzone and the Condor chose to block the Golem that got pumped with Predator's Strike. Wolfgang took 6 in total and the Scythe was the lonely artifact on Wolfgang's side of the board. 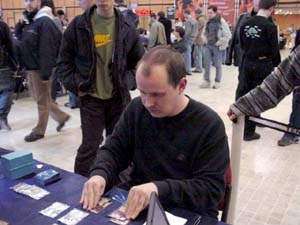 Nim Replica was next played and Jelger decided it was time to alpha strike, with only the Auriok Bladewarden on hold for the time being. Nim Replica traded with the War Wagon and Wolfgang went to 4 life.

Moriok Scavenger (targeting the Replica) was brought to the stage and Jelger thought attacking with just the Golem would be enough. Shatter killed the 5/3 before damage could be assigned.

Nim Shrieker got made next and was awarded with the Scythe, while the Replica did Jelger for 3. Jelger could only make a Leonin Den-Guard, but that kept Wolfgang from attacking. Wolfgang made a Farsight Mask with the comment "Very strong!".
Skyhunter Cub saw play on Jelgers side and Wolfgang had nothing on his own turn. So Auriok Transfixer tapped the Replica once more at end of turn.

Jelger asked Wolfgang about life totals and cast a Fangren Hunter; 4/4 trample is a good deal then...

Wurmskin Forger was the next play on Jelger side and he got Wolfgang to frown when he targeted all his 7 creatures. Only 3 counters got distributed, of course, and the lucky receivers were Gold Myr, Auriok Bladewing and Leonin Den Guard.
Everything was going into the red zone on Jelger's side, except for the Blade Warden and the Forger, and Wolfgang had his Betrayal of Flesh ready.

Hunter took it for the team, while the Condor entered play on Wolfgangs side. Then the blocking sequence began; Wolfgang had to absorb 4 damage, while Jelger had not taken any damage yet.

Shrieker blocked Den-Guard, Gold Myr met Scavenger, Yotian and Transfixer went through, while the Condor got to chump the Cub. Gold Myr got pumped to kill the Scavenger and to live another day. Wolfgang went to 2.

Only the Den Guard was on Wolfgang's side now, while Jelger still had Bladewarden, Yotian Soldier and Wurmskin Forger. Leonin Den Guard got to attack and was joined by a Steel Wall and Nim Shrieker.

Nim Shrieker got a bite out of Jelger twice before Jelger sent in the team in an effort to bring Wolfgang to an end fast before getting killed himself. A topdecked Predator's Strike made a wrong blocking decision of Wolfgang a good reason to start game 3.

Jelger did not think he deserved to win that last game.

Wolfgang would play first. Both players kept their hands.
A Silver Myr was played and got to serve for 1. Jelger made Cathodian after a Leaden Myr saw play on Wolfgangs side. Cathodian made Wolfgangs total 17 and a Yothian Soldier saw play. Nim Shrieker and Soldier Replica were made by Wolfgang and Jelger. Wolfgang Consumed the Spirit of the Cathodian and gained three while Jelger lost 3. Minds Eye got Deconstructed in mid air and with the available mana Fangren Hunter was made. 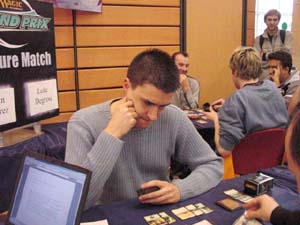 Jelger's team served for a lot of damage and put Wolfgang to12, while Soldier Replica killed some Myrs and Shriekers as a bonus on Wolfgang's side. Transfixer was built on Jelger's side along with a Bladewarden, but the latter got Bolted.
Barter in Blood killed not much on Wolfgang's side while Jelger had to say goodbye to Transfixer and Yotian Soldier. Moriok Scavenger returned nothing more than a Leaden Myr and was joined by a Shrieker to make the most of Wolfgang's team, but Wolfgang had to go to single digits from the Hunter.

Yotian soldier was made by Jelger and Wolfgang made nothing more than a change of lifetotals. During Jelgers next attack, all Wolfgang could show Jelger was a lot of land in hand and Jelger thought that would not be enough to secure a win.

"I did not deserve to win this match." Jelger.
"You can always concede..." Someone in the audience remarks.
"Nah..." Jelger.