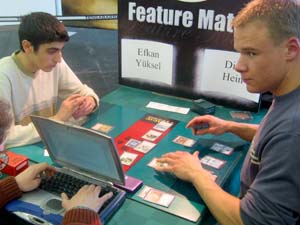 Hein, former German national champion (1998) started into the tournament with 3 Byes. He got those byes due to his high rating, which he got mainly at worlds. He didn't play in the main event, but played very many Side-events instead, winning all of them. Efkan Yueksel also started with 3 Byes, which he got in a Grand Prix Trial tournament. Even though he's been active since 1995 he is still an amateur without much experience in big tournaments, although he competed at German Nationals this year.

Efkans deck was black/blue, with many expensive creatures and a lot of removal - mostly Irradiates. Dirks deck contained a lot of artifacts, among them many good equipment cards, and some cards with affinity. He didn't have very many good creatures, and was forced to play some Replicas, Myrs and Golems from other colours. He got a few blue cards and a little red, besides that.

Efkan started the game with a swamp and an island, while Dirk played two Mountains and a Gold Myr. Efkan made a Wizard Replica, while Dirk played Seat of Synods, summoned a Neurok Familiar, turning over Bonesplitter. He cast it immediately, equipping the Familiar with it. Efkan looked for answers with a Thoughtcast.

Dirk produced a Fireshrieker, equipped the Familiar with it and brought Efkan down to 14 in the following attack. Efkan attacked back with his Replica, and in Dirks turn Irradiates away the Familiar. Dirk tried to cast a Titanium Golem afterwards, but it got countered by the Replica.

Efkan made a Pewter Golem. Dirk drew Mask of Memory and played it for a maximum effect equipping the double-striking Gold Myr, putting Efkan down to 7 and drawing 4 cards in the following attack. Efkan made a Goblin War Wagon and stayed back with his creatures, ready to block. But Dirk made another equipment, a Neurok Hoversail, gave the Myr flying and took Efkan down to 1, finishing him off with Grab the Reins after combat.

Efkan started the game with 3 swamps, while Dirk made Gold Myr in his second turn, followed by his mask of memory and an attack. Efkan missed his fourth land drop, without having played anything at all yet. On his fourth turn Dirks deck started to go insane. First he cast a Nim Replica, followed by a free Frogmite afterwards.

Efkan finally found his fourth land, summoning a 0/1 Nim Shrieker. Dirk did better: first he summoned an Elf Replica, then Vulshok Gauntlets, and finally a cheap Myr Enforcer. His attack put Efkan down to 13, who could only play an expensive Frogmite in his turn. Dirk did some equipping action and attacked, forcing Efkan to chump-block, still going down to 9 in the attack. Dirk summoned a Neurok Spy, and when he annulled Efkans Pewter Golem he forced the other player to concede.