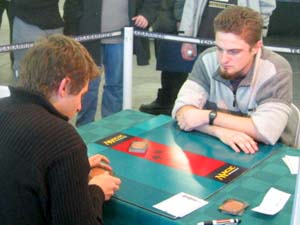 two are playing for the Top 8. At thirty-one points they have a good chance of sneaking in. The last time I saw Blech in a Feature Match table he was crushing Jan Doise on the way the Grand Prix Genova title. Today he is fighting for another Top 8.

Things did not start well for Urban. He had to take a mulligan and didn't seem too happy with his second one. Still he came out faster with a turn two Leonin Den-Guard and turn three Skyhunter Cub. Blech played turn three Spikeshot Goblin and used Predator's Strike to pump his Spikey on the next attack.

By blocking and then using its ability he killed the two great white weenies. Adam played Ogre Leadfoot and passed the turn as Reinhard unleashed his creatures. First Alpha Myr, then Tel-Jilad Archers.

With a hand full of lands, and Blinding Beam the best Adam could do was give Blech the turn again. On and on Reinhard's creatures pounded in and he blew up Adam's lone Mountain, with Creeping Mold, hoping to color screw him (perhaps thinking he had double-red cards in his hand.

Blinding Beam brought Adam some extra time but Reinhard added Copperhoof Vorrac to the mix. Adam dropped Frogmite and traded the Ogre for the Vorrac before thing got further out of hand. Leonin Skyhunter joined Frogmite on defensive assignments but Reinhard was just too strong to be stopped. He played Deconstruct and used the extra mana to power out Dragon Blood. The crowd grasped. Adam conceded a turn later.

This time they both kept the initial hand. Reinhard played Alpha Myr, Sun Droplet and Tel-Jilad Archers while Adam stumbled to play his third land, getting it on the next turn, before playing the first of two Soldier Replicas.

For a few turns they sat back, Reinhard playing land after land, while Adam added Vulshok Gauntlets, Skyhunter Cub and Goblin Replica to the mix. Finally Reinhard blinked - Creeping Mold on the Gauntlets and Spikeshot Goblin.

Adam sent two creatures into the Red Zone and the tapped out Reinhard let them through. Arrest locked up his Exile. Bonesplitter turned Adam's Cub into a flying menace. A tricky combat phase ensued with an Awe Strike saving the Skyhunter Cub.

On the next turn the Goblin Replica ate up the Sun Droplet and Reinhard Blech seemed to be in trouble. He found Tel-Jilad Archers to block the Cub and shoot it down with Spikey. Without his flying Cub, Adam dropped Leonin Skyhunter to continue the beatings.

With a shrug Reinhard played another Tel-Jilad Archers. Adam flashed a sad smile and shook his head. His Skyhunter was in trouble. Things got much worse when Reinhard played a second Spikeshot Goblin on his next turn.

The crowd groaned. The Spikey tag-team worked their magic on the Skyhunter and Reinhard again had a crowd pleaser with Plated Slagwurm. With this amazing barrage of plays Adam went from leading the game to staring in disbelief at Reinhard's army. Blinding Beam brought him some breathing room but he had to let Reinhard untap without any major plays.

The Plated Slagwurm started working its magic. Adam cycled Pyrite Spellbomb looking but all he got was a chance to play Skyhunter Patrol with Electrostatic Bolt in hand. Things where quite grim for the Polish player. Again, the Plated Slagwurm attacked. This time eating up Soldier Replica. Reinhard dropped Stalking Stones. Adam laughed.

Reinhard: "I just drew too many lands."

The Patrol attacked and Reinhard took no chances. He chumped with his Archers. Bolt ate up a Spikey and a Skyhunter Cub came into play to grab the Bonesplitter on Adam's side of the table. But it was too little, too late. The Plated Slagwurm would not be denied.