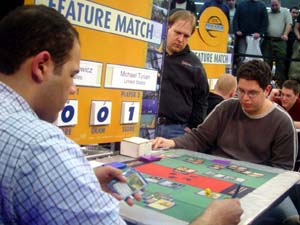 led with AEther and Necrogen Spellbombs, followed by Nuisance Engine. Mike, on the other hand, led with a curve of Leonin Skyhunter and Vulshok Battlegear. Osyp's turn four play, Neurok Spy, traded with a Vulshok Berserker. Osyp sacrificed his Necrogen Spellbomb and passes the turn, then fell to fourteen from the attack. Mike played Steel Wall and equips it with Longbow. Osyp made a Pest token at end of turn.

He then untapped and Domineered the Steel Wall. How embarrassing.

Mike equipped the Skyhunter with the Battlegear, attacked, had it bounced with the Spellbomb, then replayed it and ended his turn. Osyp made a Lumengrid Augur. The Skyhunter clambered into the Battlegear again and flew across for five. Mike made a Pearl Shard.

Osyp made a Looming Hoverguard and targeted the Battlegear. Mike replayed it, the Skyhunter put on the armor yet again and attacked for five, bringing Osyp to four. He untapped and looted with the Augur three times, pitching Frogmite, Needlebug and Necrogen Spellbomb. The Augur then attacked for two and Rust Elemental joined the battlefield.

Osyp paused, looking at the Steel Wall that still had the Viridian Longbow attached to it. "I don't control the equipment, do I? Oh, but I do control the…wait, does it have the ability? Damn it."

On his turn Mike figured it was a good time to move the Longbow to his Skyhunter. He took a point in response. On Osyp's turn Rust Elemental ate a Pest token and. Augur looted through Iron Myr, a Talisman, Pentavus, and Goblin War Wagon. He then played Skeleton Shard leaving up a Swamp.

Turian shot Osyp to three, then untapped and played Myr Enforcer, threatening a kill next turn. Osyp retrieved his Pentavus. On upkeep the Rust Elemental ate Ancient Den and Osyp looted with the mana, pitching Pentavus. He then looted through Myr Enforcer and Solemn Simulacrum, then returned the Simulacrum and pitched it again. He Irradiated the Skyhunter and took a point in response, seemingly having bought another turn. Mike, however, had Raise the Alarm for the win. 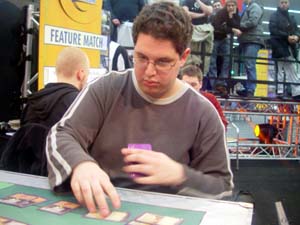 During the shuffling, Finkel, from the raised spectator area, kept going on about about Osyp's bald spot. Eventually Osyp asked for Finkel to be removed from the premises, but with Osyp's reputation, the judge couldn't be sure if he was serious. Finkel looked down and smiled, "I'm immune."

Osyp curved out with AEther Spellbomb, a Talisman, and a turn three Solemn Simulacrum. Meanwhile Mike had summoned two Auriok Transfixers. On Osyp's fourth turn, Mike tapped down the creature and the Talisman. Osyp had no play. Mike, on the other hand, summoned a hasty Vulshok Berserker and attacked for five.

Osyp played Necrogen Spellbomb and was done, choosing not to sacrifice it immediately for a card. Mike added an Ogre Leadfoot to his team but couldn't attack. On the next turn Osyp revealed why he was leaving his Spellbombs on the table; he tapped six for a 4/4 Broodstar.

Turian played Vulshok Battlegear and equipped on Ogre Leadfoot, then attacked. Solemn Simulacrum stepped in front and gladly traded itself in for a fresh card. Osyp untapped and summoned Looming Hoverguard, returning the Battlegear, and Broodstar attacked for five. Vulshok Battlegear was replayed and equipped onto the Berserker, then Ogre Leadfoot and Berserker swung in. Hoverguard stepped in front of the Leadfoot and was returned by the AEther Spellbomb after damage. Meanwhile Frogmite chumped the Berserker.

Osyp replayed the Looming Hoverguard to Time Ebb Mike again. Broodstar attacked for three and took Mike to twelve. Turian's Battlegear came into play for the third time and equipped the Berseker. It attacked to bring Osyp to eight.

Osyp played Pentavus and created a Pentavite so that Broodstar could attack for five. Mike untapped, talking to himself, "You're on eight…" He seemed severely outgunned by the rares on Osyp's side. Transfixer tapped the Pentavite to clear the way for Vulshok Berserker, but Looming Hoverguard stepped in front. He made a Wizard Replica.

Mike had no choice but to scoop.

"I was also hoping I'd draw Solar Tide there, smash your little schmucks. Take that, schmucks, take that," said Mike.

Mike mulliganed to start the deciding game. Spellbombs appeared on both sides, then Osyp had an Iron Myr and Mike had Raise the Alarm. He attacked his opponent to eighteen and added Krark-Clan Grunt. Osyp's third turn was quite impressive: Neurok Hoversail, then Frogmite for free, then Myr Enforcer for two mana. Mike played Vulshok Battlegear and was done.

Enforcer took to the air and hit for four. Mike yet again armored up a creature (Krark-Clan Grunt) and attacked for five, giving him a lead of sixteen to thirteen. Osyp cycled his Necrogen Spellbomb. 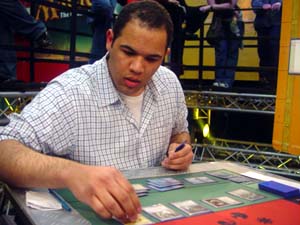 Osyp swung with Myr Enforcer for another four. He then summoned a 5/1 Nim Lasher and moved the Hoversail to it. Mike cracked back with Krark-Clan Grunt hit for five and played out the best card in his deck: Loxodon Warhammer.

Nim Lasher attacked back and Osyp passed the turn with two cards in hand, possibly representing Irradiate for five. Mike had no choice but to go for it, so he placed the Warhammer on the Grunt and sent for eight points of trampling, spirit linked goodness. His Sunbeam Spellbomb was actually rather menacing as it could give first strike, stopping any chances of a successful double block. Osyp had nothing helpful in his hand and he could only chump with Myr Enforcer, taking four with Mike gaining eight.

The Big Lebedowicz drew for his turn, but no answers were forthcoming. Turian took the game and match.