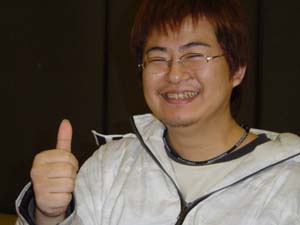 the French and Japanese Magic scenes have been on a tear recently. Just last week, Gabriel Nassif was defeated by Masashiro Kuroda in the finals of the Pro Tour. The two veterans that were slugging it out this round were bringing home Top 8 performances for their respective homelands since before it was the trendy thing to do.

If Antoine Ruel won this round he would be a lock to join his brother in the Top 8. Jin needed several factors to line up in is favor if he won but he was in a good position for them to come to pass.

Antoine played Arcbound Ravager on turn two. Jin had a Talisman. There were not other artifacts in play for the Frenchman to take advantage of with his Ravager and he had turn three Neurok Spy. Jin's Neurok Familiar binned an Island when it hit play.

Ruel sighed as he played his fourth land and merely attacked for two. The Last Emperor paid four mana to dig two cards deep with Thoughtcast and passed the turn without any other play. Antoine's Tree of Tales allowed for a Tel-Jilad Archers.

Jin tapped six mana for an Arcbound Fiend. Antoine had the Deconstruct but nothing to sink the mana into. He siphoned one into a Grimclaw Bats and took two points of burn. He attacked with everyone and when Jin blocked the Ravager he ate his Tree of Tales to save the modular man.

Jin attacked with a freshly baked Oxidda Golem and left a Cobalt Golem back to watch the gates. He tried to block the Ravager but Antoine had the Echoing Decay to save his guy. The Frenchman pumped his Bats and Jin fell to five. Jin grinned sheepishly as he played a high flying Hoverguard Observer.

When Antoine demonstrated a willingness to attack with everyone the Japanese player conceded with a nod of the head.

Antoine sided out his Ravager with a thumbs down gesture. He opened with Island. Tree of Tales, and Chromatic Sphere. Jin set him back a turn by Shattering the green source. He drew a swamp on the next turn and was able to Echoing Decay an Oxidda Golem. He cycled his sphere in hopes of land number three but only got mana burned for his efforts.

Jin had another Golem and bashed for three. Ruel drew a Copper Myr and played it. Jin smashed in for three more and paid four for a Thoughtcast. Antoine drew another Swamp and set Jin back a card with Chittering Rats. The Rats traded with the Golem and Jin played an Engineer and Iron Myr.

Antoine was still scuffling for lands and cast Pulse of the Dross. He took a Looming Hoverguard over Myr Enforcer and Neurok Familiar. Jin drew a huge laugh from the crowd when he top decked a second Hoverguard and put the Copper Myr on top of the Frenchman's deck.

Antoine played a Darksteel Ingot over the Myr. Jin attacked for three and played Myr Enforcer and the Familiar--he was rewarded with Pewter Golem. Antoine Deconstructed the Enforcer and played his Copper Myr and Echoing Decayed the flier. Jin piled on with Pewter Golem and Cobalt Golem in one turn while Antoine tried to find a way to extricate himself.

He drew two with Thoughtcast. He found another land which also allowed him to Viridian Shaman the Cobalt Golem. Jin smashed in with everyone but the Engineer--to regenerate the Pewter Golem--and Ruel scooped when he played a Quicksilver Behemoth post attack.

Both players kept mana heavy hands. Jin had the first play--a Vedalken Engineer. Antoine played a Wizard Replica on his third turn. Neurok Familiar found a Pewter Golem for the Japanese player and he followed it with a Spawning Pit.

The French player got in for a point in the air and cast Chromatic Sphere and Darksteel Ingot. With three more lands in hand his was not happy. He drew into Pulse of the Dross with a Thoughtcast and when he cast it was given the choice of Island, Mountain and Shatter. He took the last one and the Pulse came back to his hand thanks to two additional mystery cards in the Japanese player's hand. 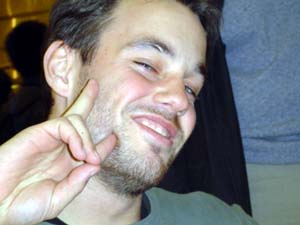 Jin played a land and cast Pewter Golem. He had three cards left. Olivier cycled his sphere and cast Pulse again. He took Looming Hoverguard over Oxidda Golem and Island. Antoine followed it with a Scavenging Scarab and elected to keep his Wizard Replica back.

Antoine seemed crushed when Jin played a Hoverguard Observer off the top of his deck along with the Oxidda Golem. The Frenchman found a Grimclaw Bats and played it. When Jin played an Arcbound Fiend off the top Antoine was forced to counter it with the Wizard Replica. It did not matter as that left Jin with a lethal attack.