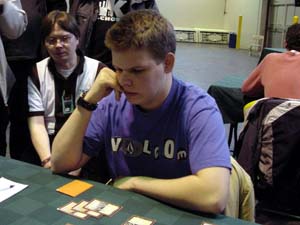 is no stranger to GP success, having won GP Prague last year. Kai of course needs no introduction, the "German Juggernaut" looking to add another GP top eight to his long, long resume.

The players chatted in German as they shuffled up, and we're quickly underway at quite a pace!

Jedlicka elected to play first, and both players kept their opening hands. Jedlicka had a turn two Gold Myr and a turn 3 Skyhunter Patrol with three Plains in play, Kai made three Islands and a Spire Golem. Jedlicka Purged the Golem and attacked. Kai made an Elf Replica to join his Steel Wall and Viridian Longbow.

Jedlicka has no play on turn five, sitting on four Plains and a Gold Myr. His Skyhunter continued to chip away at Kai's life total. Kai had only four Islands, and played a Leonin Scimitar and equipped his Longbow to his Wall. Jedlicka still on only four land made a Soldier Replica, attacked and passed. Kai made a Somber Hoverguard and issued it a Leonin Scimitar. Jedlicka attacked past it with the Patrol, Replica scaring off the Hoverguard, and made a Leonin Battlemage after combat. Kai swung in for four with the Hoverguard, dropping Jedlicka to 15, and played out a Quicksilver Behemoth. He ended his turn.

Both players were still sitting on four basic lands of one type. Jedlicka powered up his Skyhunter with the Battlemage, made a Bonesplitter, then powered up again and made an Auriok Transfixer. He attacked for 6, dropping Kai down to 5 now, and electing to leave his Battlemage untapped, he passed the turn. In his end step Kai shot the Transfixer with his Viridian Longbow. Jedlicka almost put his Transfixer in the graveyard, but after thinking a moment used the Battlemage to save it.

Kai finished off the Transfixer and played land number five, another Island. Kai sent in both his Behemoth and Hoverguard. Jedlicka had no blockers, and Kai replayed his Behemoth and passed the turn, two blue mana untapped.

Jedlicka laid a fifth Plains, pumped his Skyhunter Patrol to a fatal 5 power with the Battlemage and swung in. Kai plays Echoing Truth, but Stefan had Razor Barrier, and the game was over.

Kai kicked things off with a turn one Viridian Longbow, and Stefan with a Leonin Bola. Kai Dominated Stefan's turn three Soldier Replica, and Stefan makes a turn four Skyhunter Patrol. Kai fabricated for an Ancient Den, played it and passed. Stefan played a Talon of Pain, attacked, adding a counter to the Talon, and played out a Sunbeam Spellbomb. He passed the turn.

Kai attacked for one with the Soldier Replica, played a four mana Myr Enforcer leaving one Island untapped, and passes the turn. Stefan drew a card from his Spellbomb. Kai says something jokingly in German; as best I can tell it was along the lines of "You don't want use the life gain ability instead?" Stefan smiled and declined.

Stefan made a Leonin Battlemage, and passed to Kai. Kai attacked with his Myr Enforcer, and used Looming Hoverguard to return the Talon to the top of Stefan's Library. Stefan returned the talon, attacked Kai down to 13 with a pumped Battlemage, added a counter to the Talon and equipped the Bola to the Battlemage.

Stefan used the Bola to keep the Battlemage tapped. Kai attacked with his Hoverguard, and Soldier Replica, taking Stefan down to 11, then played a Chromescale Drake, flipping Neurok Spy, Echoing Ruin, and Great Furnace, which went to his hand. He also played out a Spire Golem and a Quicksilver Behemoth - the power of affinity!

Stefan's Patrol again took Kai down three points to 10. Stefan Purged the Spire Golem, untapping the Battlemage, and equipped the Bola to it once more. He tangled up the Enforcer with the Bola, and took 10 from Kai's attack! Stefan scooped on his next turn.

Stefan mulliganed to six playing first. He cycled an early Sunbeam Spellbomb and by turn three had a Auriok Glaivemaster equipped with a Bonesplitter. Kai had a turn two Arcbound Stinger and made a turn three Serum Tank. Stefan made the Talon of Pain once more, and attacked Kai down to 16 with the Glaivemaster. Both players added counters to their artifacts.

Kai's Stinger took Stefan down to 18, and he drew a card off the Serum Tank, then played a Great Furnace, and a Viridian Longbow, charging up the Tank's counters. Again Stefan swung in with the Glaivemaster, adding a second counter to the Talon of Pain. He used its ability to shoot Kai's stinger for one, and played a Gold Myr.

Kai had an impressive turn with a three-mana Myr Enforcer and a two-mana Quicksilver Behemoth! Stefan sent in the Glaivemaster, and Kai double-blocked with his affinity monsters. Stefan Purged the Enforcer, and with the help of the Talon finished off the Behemoth. Kai's two huge monsters had been reduced to ashes as quickly as they had appeared.

Kai untapped, played a Spire Golem, Domineered Stefan's Gold Myr and played a Somber Hoverguard, bringing him right back into the game. Kai, on 12 by this point and not wanting to let the Talon accumulate any more counters chumped the Glaivemaster with the Myr. Stefan played out a Skyhunter Patrol and passed the turn.

Kai now had six land and two active monsters on the board, finally in a position to remove the troublesome Glaivemaster. However, if he did so, the Skyhunter Patrol would acquire the Bonesplitter and become a 4/3 first striker, and the Talon would still accumulate another counter. Kai elected to draw a card from his Serum tank instead, then played out an Island, a Spire Golem and equipped the Longbow to a Golem. He passed.

Stefan sent in his Glaivemaster, and after some consideration, Kai triple blocked. The Glaivemaster traded for a Spire Golem. Stefan made an Auriok Transfixer, moved his Bonesplitter to the Skyhunter Patrol, and passed the turn.

Kai drew a card from the Serum Tank and laid another Island. He re-equipped the Longbow to a Spire Golem, but had no other plays.

Stefan sent in the Patrol, and Kai had no option but to let it through. Stefan played a Loxodon Mystic and passed. Kai shot the Transfixer in his end step and untapped.

Kai drew a card from his Serum Tank, laid another artifact land, and cycled a Necrogen Spellbomb. Again, with no other plays, he passed.

The life scores stood at Stefan 17, Kai 10. A huge crowd had gathered to watch the match. 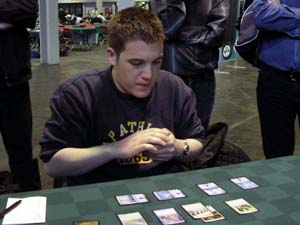 Stefan sent in the Skyhunter Patrol, and Kai double-blocked. Kai shot Stefan before his Spire Golem died to the first strike damage, and Awe Strike saved the Patrol from the Hoverguard. Stefan made a Neurok Prodigy and passed.

Kai drew another card from the Serum Tank, made himself a Quicksilver Behemoth and went to equip the longbow to the Hoverguard. Stefan tapped it in response, and Kai ended his turn.

Stefan attacked for six in the air with The Neurok Prodigy, and added two counters to the Talon of Pain. The situation now hopeless, Kai scooped.