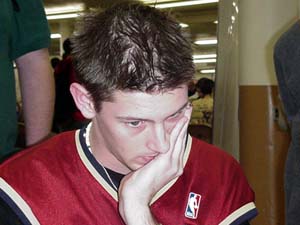 Matt Linde and Eugene Harvey are both names that need little introduction. Both are former U.S. National champs who have fared well in their Magic exploits over the last year. Harvey was in the Top 8 at Pro Tour: New Orleans, Top 4 of Team Pro Tour: Boston, and Top 16 Amsterdam, while Linde won Pro Tour: Boston with his team, was a finalist at Grand Prix: Atlanta, and made the Top 16 in Yokohama. Both players featured decks sporting Red, but Linde's was a lightning fast U/R Affinity creation, while Eugene's was a slower, but possibly more powerful R/G deck.

Linde won the roll and chose to play. Both players kept their hands, and they were off. An Arcbound Worker for Eugene and a Silver Myr for Matt were the first two creatures to hit the board, as both players jockeyed for position. Turn 3 saw Linde almost drop his hand, as he played a Cathodion, a second Aether Spellbomb, and a free Frogmite to lock up the ground game. Eugene cast a Krark-Clan Stoker, but it failed to trade with Linde's Frogmite, as a timely Scales of Chiss-Goria hit the board.

Harvey's hand held both Barbed Lightning and Shrapnel Blast, and Linde had already used both of his Aether Spellbombs, meaning the removal was sure to find a target. Cathodion met a bolt of Lightning, making things look a bit better from Eugene's side of the board until Matt dropped Triskelion on the next turn. Harvey took a very long moment to figure out what he wanted to do about the imminent pinger, before simply laying a land and passing the turn. Trike and Frogmite attacked the next turn, and Eugene let them through, dropping to nine. Iron Myr hit the stack, and Eugene's Arcbound Worker was pinged away before it entered play, making sure no tokens would be moved around.

Linde cast Broodstar and pushed Trike, Frogmite, and Krark-Clan Stoker into the red zone. Eugene blocked the Triskelion with his Myr, and Blasted the Broodstar out of the sky, dropping to five life in the process. His next draw phase found no answers to Linde's little beaters though, and it was off to game 2.

Eugene's hand revealed only one land to go along with a pair of two-drops, but he was looking for consistency on the play, and chose to toss it back. His second set of cards was deemed acceptable, but now Linde chose to Paris. Unfortunately, Matt's second set held no land at all, so he tossed those six in, looking for a better five with a sad shake of his head.

Play finally kicked off with a pair of Pyrite Spellbombs from Matt plus an Arcbound Worker, while Eugene played a few turns of "land, go" before dropping a Soul Foundry on the boar imprinting Goblin Replica. The Foundry quickly met an Echoing Ruin from Linde though, and Eugene found himself down a bomb and a utility creature. Rebuking Ceremony sent Arcbound Worker and Darksteel Pendant back to Linde's library, but that only slowed him for a turn, as Eugene was utterly lacking in action. Vulshok Berserker and Wizard Replica placed some real pressure on Eugene until he finally answered back with an Arcbound Bruiser. The Bruiser survived taking down a Vulshok Berserker with a little help from Predator's Strike, and gained flying the next turn from a Neurok Hoversail, as Eugene tried not to drop any lower than the precarious six life he was already at. 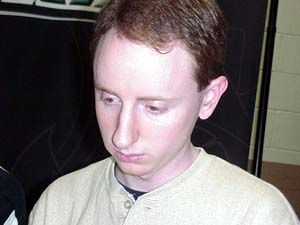 Arcbound Worker (swinging an Axe) was blocked by the Bruiser this time, and that plus Shrapnel Blast on Linde's Wizard Replica cleared the board for both players, as the rebuilding began. Slith Firewalker ran across an empty board to smack Linde, but Matt was nonplussed as he answered back with Krark-Clan Stoker and Triskelion. Once again, Eugene's deck gave him no answer, and extended the hand, sending Matt into a probable Top 8 birth.