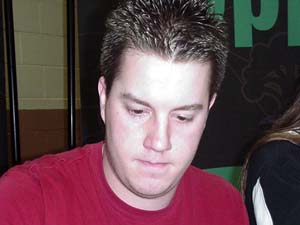 Craig is an affiliate of TOGIT, and part of the TOGIT team that has two fifth place finishes at teams Grand Prixs and a fifth at the Pro Tour. He also has an individual GP top 8 and a ninth place at the Pro Tour, and is looking to add another top 8 today. His opponent, Gerry Thompson, is a Minnesota player who also has a GP top 8, and has competed several times on the Pro Tour. Both must win to preserve top 8.

Gerry received a gift of some 'bling' before the match started - one of his teammates loaned him a sparkly necklace for good luck, and he posed with it for the camera. Gerry won the die roll and choose to go first.

Gerry led off with a Vault of Whispers and a Sunbeam Spellbomb. Craig followed suit with an Island and an Aether Spellbomb, and Gerry played an Island of his own and Grimclaw Bats. Craig had a Mountain and a Copper Myr.

Gerry played a Swamp and attacked before playing a Nim Lasher. Craig played an Island, tapped his four mana, and then stopped to think... he finally came out with a Fireball, killing the Lasher and the Bats. Gerry played another Island and a Somber Hoverguard before passing the turn back. Craig used a Psychic Overload to tap the flier and swung in for one.

Gerry used the Sunbeam Spellbomb to draw a card, then played a Neurok Spy and a Swamp. Craig also sent his Spellbomb off for a card, and came down with an Arcbound Reclaimer. He sent the turn back to Gerry, who attacked with the Spy and put a Relic Bane on the Copper Myr. He also played a Spawning Pit, then said go.

The Relic Bane took Craig down to fifteen during his upkeep. An Island let him play Looming Hoverguard, sending the Spawning Pit back to Gerry's library, and he attacked Gerry for three. Gerry just hit Craig back and replayed the Spawning Pit.

Another upkeep, and Craig was at eleven. He played a Mountain and another Aether Spellbomb before attacking, and Gerry was down to ten. Craig then emptied his hand out for a Neurok Transmuter and passed the turn back. Gerry swung in again with the Spy and played a Flayed Nim. Craig didn't realize that making the Copper Myr into a non-artifact with the Transmuter would make the Relic Bane fall off, so he burned the Aether Spellbomb to bounce the Myr back to his hand during end step. He attacked with the Hoverguard on his turn, replayed the Copper Myr and said go.

Gerry attacked with both his creatures, but Craig turned both of his artifact creatures into blue creatures to be able to block the Neurok Spy. The Arcbound Reclaimer blocked, and with damage on the stack Craig put one of his Aether Spellbombs on top of his deck. Gerry sacrified his Spy to the Spawning Pit, and Craig took two from the unblocked Nim.

Craig swung back at Gerry with the Hoverguard and the Transmuter. Gerry sacrificed the still-tapped Somber Hoverguard to the Spawning Pit before blockers, then made a token creature. Craig bounced the creature before he could block with the Spellbomb, so Gerry responded by sacrificing both that creature and the Flayed Nim to the Pit and making a new creature. This new creature traded with the Transmuter, while Gerry fell to four. Craig also played an Arcane Spyglass and drew and played an Island before saying go. Gerry drew and then scooped.

The friend of Gerry's that had loaned him the bling asked for it back between games, explaining, "I never beat Craig - that thing's bad luck!" Gerry, meanwhile, pointed at the other feature match and said that Matt Linde was his call to win the whole thing.

Gerry started Game 2 with just a Swamp, and Craig had an Island. Gerry had Vault of Whispers and Grimclaw Bats for the second turn, and Craig answered with another Island and a Copper Myr. Gerry played another Swamp, attacked Craig for two (taking one himself) and laid an Empyreal Plate on the table. Craig's Mountain and Neurok Spy just didn't seem as impressive.

Gerry equipped the Bats on his next turn and attacked for six, putting Craig to twelve. He played another Swamp and said go with two mana up to Terror Craig's Spy when he tried to attack. Craig replaced it with a Clockwork Vorrac, but Gerry was still free to attack in the air the next turn, pumping the Bats once to make the life totals seventeen to six. Gerry also played a Relic Bane on the Vorrac before passing the turn.

Craig fell to four on his upkeep, then attacked to put Gerry at twelve. He Fireballed the Bats to take them off the board, but Gerry had a Moriok Scavenger (returning nothing) and the Relic Bane was still there. Gerry declined to block the Vorrac when it attacked the next turn, and Craig was forced to use Looming Hoverguard on it just to stay alive at two. Gerry equipped the Scavenger and attacked. "How much?" Craig asked.

"I better block it." The Hoverguard chump-blocked, but Craig scooped up anyway when Gerry also played a Neurok Spy.

There was a bit of banter between the games, as Gerry complained that Craig drew Fireball and Looming Hoverguard every game, while Craig protested that he still lost Game 2. Craig said that he was keeping his hand, to which Gerry asked how many Fireballs he had. Gerry also kept.

Craig played out an Island and an Aether Spellbomb, while Gerry started with a Swamp and a Disciple of the Vault. Craig had only a Mountain on his second turn, and Gerry attacked for one and played Grimclaw Bats. Craig drew a card with his Spellbomb before Gerry ended his turn, losing one to the Disciple.

Gerry attacked with the Spy and the Bats to put Craig to fourteen, then played a Nim Lasher and a Lifespark Spellbomb. Craig had an end-step Thirst of Knowledge, and thought for a long time before choosing to discard two Islands. He still had a Mountain to play on his fifth turn, letting him cast his Clockwork Vorrac. Gerry had the Empyreal Plate again, and equipped it on the Spy for +2/+2. His attack dropped Craig to nine.

Craig Detonated the Plate, losing one to the Disciple in the process, and attacked again with his Yotian Soldier for one. He played a Copper Myr and passed the turn back. Gerry sent in the Bats and the Spy again, pumping the Bats three times to leave Craig at two and himself at thirteen. He had a Sunbeam Spellbomb to go with his Lifespark, but with only one mana could not finish Craig off that turn. Craig pumped the Vorrac and then paused for a moment to think. 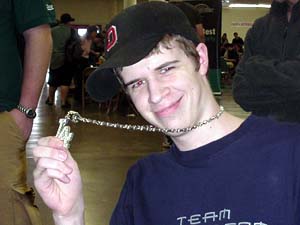 Craig untapped and looked at his deck. "If this is a Mountain, I win." He drew, looked at the card, and played it... a Mountain. He started celebrating even as he attacked with the Vorrac and the Yotian. Gerry looked at him, trying to figure out if Craig was serious, or if he was just trying to goad Gerry into a mistake of some kind. He finally decided to double-block the Vorrac, and Craig tapped his seven mana for an entwined Savage Beating. Gerry sent one Spellbomb off to put Craig at one, but he had no more mana, and the fact that the Vorrac had trample meant that he was dead.

1 Barter in Blood 1 Promise of Power