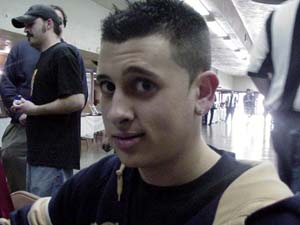 There was quite a bit of interest in this match-up. Both players were sitting on thirty-four points with 11-2-1 records on the weekend. The winner would be a shoe-in for Top 8 and the loser would be knocked back out beneath the Top 16. With six players above them with thirty-six points or better it also meant that one player with a 11-3 record would reach the Top 8 draft table.

There had been some talk that it could be two players. Thirty-seven pointer Matt Larson was considering playing and potentially opening the door for another thirty-six point player to make it in. When he found he was paired with Turian he obviously decided to draw.

Jordan Berkowitz has been a presence on the Professional Magic scene for just over a year. He first rose to people's attention with his Top 8 appearance at Pro tour Venice. He expects to make the Top 8 of every event he plays in and was pumped up for this elimination match.

Aaron Lipczynski was not as pumped. The Buffalo area player felt his deck was sub-standard and he seemed hesitant about his chances. Aaron did not have the experience of Jordan--he had only played in one previous Pro Tour and had never finished well at a GP prior to this one--but is well regarded by Ken Krouner and his crowd.

Aaron opened up with a Tel-Jilad Chosen but Jordan was ready with a turn three Spikeshot Goblin. Aaron beat in for two and Jordan played a Nim Replica attempted to shoot the Chosen during Aaron's upkeep. He had the Predator's Strike and Jordan took five

Jordan shot it again on his turn and this time it stuck. He fortified with a Nim Shambler and when Aaron played a Tel-Jilad Exile, Jordan had Essence Drain at the ready and was able to attack for eight. Aaron took a quick peek at the top of his deck and they were off to Game 2.

Aaron kicked of the second game with a Copper Myr and Jordan came back with one of the Leaden variety. Aaron accelerated in to a turn three Tel-Jilad Exile. Jordan had no play for his third turn and took two from the Exile on Aaron's next turn.

Jordan played a 3/1 Nim Shambler and it was enough to keep the Exile back on guard duty. Both players passed the fifth turn with a Myr and their regenerators and five mana. Aaron made a Darksteel Gargoyle and Jordan took the opportunity to Essence Drain the Exile on his next turn.

Aaron got in for three and played a Tel-Jilad Exile. Jordan had Screams from Within and attempted to enchant the Chosen. Aaron responded by Bolting his own guy lest he lose the Myr and have his Gargoyle become a 2/2.

Jordan swung in with his Shambler and the two players traded Myrs--Jordan sac'd his to regenerate his Shambler. Aaron continued to attack in the air and had a Tel-Jilad Outrider to hold the ground. Jordan found an answer to the indestructible flier with an Icy Manipulator. Aaron served with his Outrider and his Gargoyle was tapped. He played an Ogre Leadfoot post combat.

Jordan's deck offered him up a Myr Enforcer and he passed the turn. Aaron attacked with both his ground creatures and Jordan blocked the Leadfoot with his Shambler. He sacrificed the Enforcer to regenerate. Aaron's deck continued to present obstacles for Jordan and he played a Tel-Jilad Archers.

Jordan took five on the next attack. He tried to bolt the Outrider on his own turn but Aaron was ready with a Predator's Strike. Jordan fell to five and traded the Shambler for the Outrider. Aaron kept up the pressure and played a Tel Jilad Exile. Jordan had a Dross Golem but it could not block the Archers and he was down to one life.

Jordan stared at his one-land hand but could not keep it. He went back to the well for another six and decided to keep them. He led off with a Darksteel Citadel and a Great Furnace powered out a Frogmite but Aaron was ready with the Tel-Jilad Chosen. Aaron beat in for two and Jordan beat back. He had a Dross Golem but things looked bleak for him when Aaron played a turn four Fangren Firstborn. 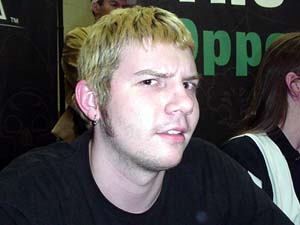 Jordan shook his head and played Myr Enforcer. "How many cards?" After he drew Aaron answered, "Six now." Jordan rolled his eyes and Aaron attacked with eight points of power. Jordan sat back and thought about blocking the Firstborn. He had no blocks and Jordan fell to eight. Aaron iced the cake with a post attack Arc-Slogger. Jordan was crestfallen and tried to figure a way out. The best he could muster was a Nim Shrieker, which fell to the Arc-Slugger's ability. Aaron attacked and a round of quarters was tossed onto his creatures. Jordan mulled his blocks and finally put one guy in front of Arc-Slogger and another and his Enforcer in the path of the 6/4 Firstborn. The 4/3 Chosen was let through unmolested. Aaron confirmed the blocks and finished Jordan off with a Fists of the Anvil.

Berkowitz looked at the much-maligned card, checked his life total and threw his cards down in disgust and stomped off through the peanut gallery.