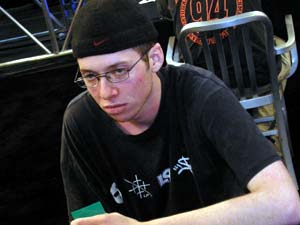 there's one thing beloved Internet curmudgeon Tim Aten can't stand, it's being in a Feature Match. He even came to the table armed with a statue of a young version of himself holding a sign reading "I Hate You". Opposite him, resplendent in his red Che Guevara T-shirt is none other than Ben Rubin, the two-time Masters Champion. Both players are at 9-4-1.

At that point, Worth trailed off.

Aten led with Vulshok Gauntlets on the second turn, but had nothing to do with his third. Rubin meanwhile made a pair of Necrogen Spellbombs and cycled one of them, then played Neurok Spy. Two artifact lands let him outclass Aten's Hematite Golem with Myr Enforcer. Aten neutralized that with Tel-Jilad Archers.

Rubin untapped and considered his options. He sent off his other Spellbomb, then swung in with his Spy. He finished off with an Ancient Den (to go with swamp, Vault of Whispers, Darksteel Citadel and island) and an Arcbound Stinger. Aten drew and attacked with his men. Rubin blinked.

Rubin pushed his Enforcer in the way of the Golem and watched as Aten pumped it twice. Then he sent it home before damage with an Echoing Truth. Aten kept this from turning into a total disaster by having a Tel-Jilad Chosen ready to play with his remaining two mana.

Rubin's evaders hit for three and he plonked down a 5/5 Broodstar. Aten was unmoved. He untapped and flung Tree of Tales at it with Shrapnel Blast, then dropped a Fangren Hunter and hit for two with his Chosen. Rubin was still stocked with gas. He hit with his Spy and added a Spire Golem and an Arcbound Ravager to the table.

"Oh, you're playing that. Somebody knows." - Ben Rubin

"I learned from the best." - Tim Aten

Rubin sat back and played Pulse of the Grid. His discard of Spire Golem got Aten wondering about the card he kept. He put the screws to Rubin by giving the gloves to his Fangren Hunter and attacking with it and the Chosen. Rubin took all ten on the chin, falling to four. With so many artifacts on board, the Ravager and two artifact fliers made sure a swingback was lethal. Aten made him sweat a bit, but ultimately scooped.

The only action before Aten's turn-four Tangle Golem was Rubin cycling a Spelbomb. He played three islands, then an Ancient Den. Aten clubbed him for five and then tapped out for Ogre Leadfoot. Rubin tapped three and showed him Override for one. Then came a Pewter Golem for Rubin while he fell to ten from the Tangle Golem. Drill-Skimmer gave Aten still more firepower.

Wizard Replica showed up just in time to keep the Skimmer home. Aten sent the Tangle Golem again, and shocked no-one when he showed Predator's Strike after Rubin blocked with Pewter Golem. Unfortunately for him, Rubin had Echoing Truth again. Aten had to content himself with a Tel-Jilad Wolf. 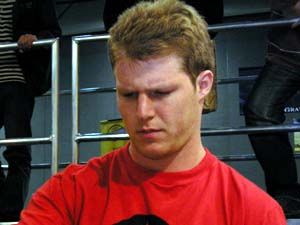 Rubin untapped and dropped Myr Enforcer. Aten tried to match it by replaying his Golem, but Rubin had Annul to send it packing. The Enforcer started hitting. Spire Golem joined in the fun. Aten made a Hematite Golem with two mana up, and used it and the Wolf to take down the incoming Enforcer. The Spire Golem kept hitting with neither player making a play.

Rubin broke the silence by upping his clock with a Neurok Spy. All Aten had was another mana Myr. Now the Pewter Golem wanted to join the fight, and the Myr had to take a dive. Aten hit back for two with his Wolf and played a Chosen, but a Disciple of the Vault from Rubin meant that not even Shrapnel Blast would save Aten.

1 Disciple of the Vault 1 Terror