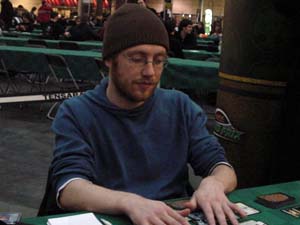 and Quentin will both need to win out from here in order to reach top8. They both think that the winner of this match will have good odds on reaching that though. Quentin has a deck based on enchantments and Drake Familiars, while Kapalas is running a regular Boros deck.

Kapalas starts off with a mulligan, Quentin begins the game with five hand cards. He was really close to keeping this six-card hand: Island, Birds of Paradise, 2 Selesnya Evangel, Civic Wayfinder and Fist of Ironwood. Thankfully he decided against it, his reasoning being that Georgios is playing multiple Sparkmage Apprentices. His opening hand is not that bad actually, his Birds of Paradise indeed gets killed by an Apprentice, but a turn two Vinelasher Kudzu survives and gets a change to get big. After a few points of damage Kapalas trades a creature and Fiery Conclusion for a Saproling token and the Kudzu. Quentin has a Selesnya Evangel, which receives Faith's Fetters, Quentin bounces the Evangel, which receives another Faith's Fetters. In the meantime some Fist of Ironwood-tokens put Kapalas in danger as he doesn't really have any creatures to block with. Quentin is stuck at five mana, and is holding Auratouched Mage and Vedalken Dismisser. He never finds the sixth land, but the Saprolings carry him to victory nonetheless.

In Game 2 2 Thundersong Trumpeteers fight versus a Selesnya Guildmage and a Vinelasher Kudzu. Quentin makes few tokens, and the Guildmage gets killed by two Sparkmage Apprentices. Ordruun Commando pretty much trades with all the tokens in play, and two Divebomber Griffins take the skies for Georgios. Quentin goes to 13, then to 7, then to 1. A Sparkmage Apprentice seals the deal. 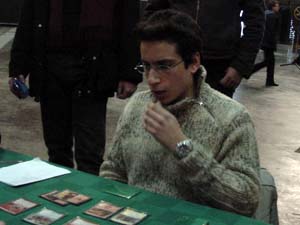 Eleven minutes remain in the round. A draw will eliminate both players from top 8 contention, so fast play is expected. Galvanic Arc takes care of Selesnya Evangel, and makes sure that Thundersong Trumpeteer can hold off Quentin's token army (due to the first strike ability). However, as Georgios does not do much else other than casting Centaur Safeguards and Courier Hawks, Quentin builds quite an army thanks to double Drake Familiar in combination with Fists of Ironwood. At six mana, Selesnya Guildmage hits play for Quentin, who thinks for a while, and then decides to push all his guys in the red-zone, and pump all of them with the fresh Guildmage. Cleansing Beam would pretty much wreck Quentin, but he is aware of this risk, and is facing a time constraint as well. Kapalas does not have Beam but Fiery Conclusion, which does in fact kill the Guildmage, but Georgios is forced to take 13 damage in one turn. All Quentin has to do now is attack Kapalas with all his creatures twice, and hope no Cleansing Beam or Rain of Embers appears. Two drawsteps from Georgios lead to two Mountains, so Quentin wins and is now one match away from making his second GP top 8.