his was a audible feature match, as No. 20 Ranked Player Makihito Mihara conceded to Kentarou Yamamoto and his Mono-Black Devotion deck. That puts both players at 36 points going into Round 15. This was a blessing for coverage, because who doesn't like looking at (5) Reid Duke?

"I'm nervous," Paul Rietzl declared to Reid Duke from across the feature match area. Rietzl was playing in another battle, but could see Reid from where he sat. "You nervous?" Duke nodded his head. It was getting late in the rounds and most players under the spotlight were sitting at 30 points, a full six behind the clear leader Makihito Mihara and his Colossal Gruul. To finish in the Top 8, 30-pointers would have to win the rest of their matches, and even then hopes might rest on a tiebreaker. This was bad news for the fifth-ranked player in the world, and many of his StarCityGames teammates, including Rietzl.

Rietzl then looked over at Hall-of-Famer Kai Budde, sitting at yet another visible feature match. "Hey Kai, you nervous?" The man looked up, then simply went back to shuffling. The winningest Magic player of all time was not nervous. Likely the same could be said for fellow Hall-of-Fame compatriot, Kamiel Cornelissen. Like Kai, another dominant European player who took the short flight here to enjoy some cards. For those of you who are a little too young for Cornelissen, this Pro Tour offers a great lesson. The man had not drafted the format until yesterday. He's currently in contention for the Top 8.

"Two prereleases and that's it. I couldn't really play after that." When Duke heard that, he could only politely sigh. Clearly he had prepared greatly for this event – one of the best players in the world, preparing with other incredible players – yet here he was, on par with a guy who couldn't spare the time for a draft, and who basically took the first version of a deck from Frank Karsten at the Prerelease. That's how good Kamiel Cornelissen is. 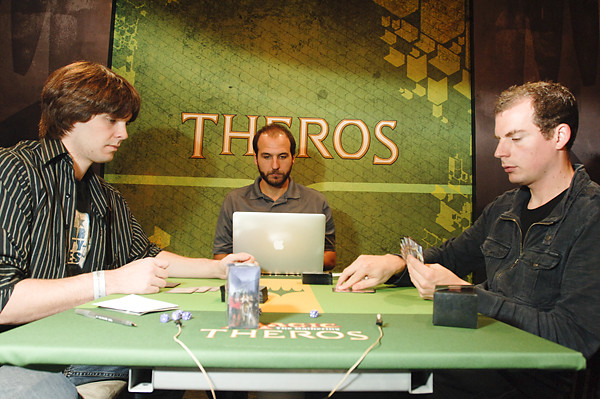 Hall of Famer Kamiel Cornelissen had little time to prepare for Pro Tour Theros, opting for an early version of the ChannelFireball deck, Mono-Red Devotion. The tournament has gone well for him, as he sits across No. 5 Ranked Player Reid Duke in a fight to stay in Top 8 contention.

It didn't help matters for Duke was his mulligan to four cards for the first game, and on the play.

"Last time I sat in this seat, two round ago, I mulliganed to three." Duke opined.

"Did you win?" Cornelissen earnestly wanted to know.

Duke replied honestly. "No." However, he was quite close.

"Aw. That would have been cool."

"Well it'd be cool if I win this time." Cornelissen nodded in agreement with Duke and the two started to play. Well, as much as you can play three-and-a-half cards down. If Duke could hit all his land drops, the deck is powerful enough to take the game.

Duke had about as good of a four-card hand has you can have, but he wasn't able to hit his second land until turn three, which was what sealed his fate. He was able to cast a Nightveil Specter on turn four, but by that time Cornelissen already had an Ash Zealot and Chandra, Pyromaster. Cornelissen surveyed the board, then tapped out to cast Stormbreath Dragon and the game ended shortly after that.

Cornelissen said to Duke, as they shuffled, "That's the only other deck I've played with. It's interesting. You get like 50 good cards, then like ten that you just have to play." He was referring to cards like Judge's Familiar and Claustrophobia that usually aren't Constructed stand-outs, but empower devotion too well to leave out. 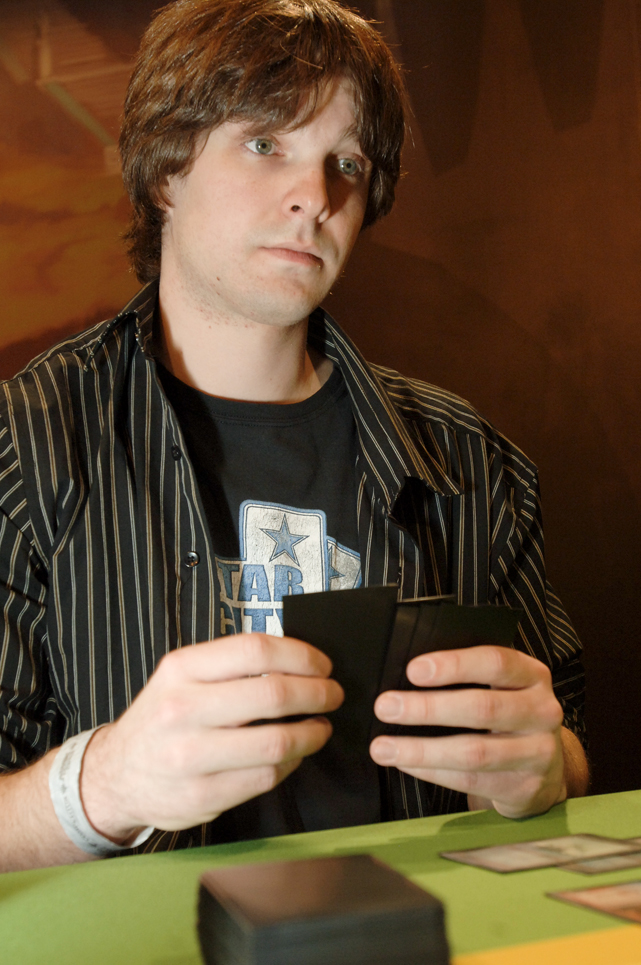 Duke keeps his head up even after some unfortunate first-game mulligans.

Duke's opening hand in the second game was worlds better than his last and he was able to cast Frostburn Weird into a Nightveil Specter right on time. He was only missing the one-drop, and he would do just fine without it. His turn four brought him a Nykthos, Shrine to Nyx, making mana for both an Omenspeaker and another Frostburn Weird. Duke wasn't hitting hard, but his board presence and devotion count were both stellar.

Cornelissen's first play was a Hammer of Purphoros on the third turn, but he built quickly after that. He went Burning-Tree Emissary into Purphoros, God of the Forge (with enough devotion to be creature) and he attacked thanks to the hammer providing haste. However, without some sort of absurd mana-producer of his own, it seemed like Duke would be able to move farther and farther ahead despite the Indestructible 6/5.

And that's when the Cyclonic Rift came in. Nykthos allowed for an overloaded Rift from Duke, and Cornelissen had to pick up his whole board, blanking any shot at devotion. Though Duke was only hitting in 5–6 damage chunks, staring down all those creatures was enough for the Dutch player to pack it in for the rubber game.

Nykthos, though not a lynchpin of Mono-Blue Devotion, can provide extra oomph to get in under the inevitable cloud of Mono-Red Devotion. The last game again highlighted again the power of the new legendary land, but for the other side. 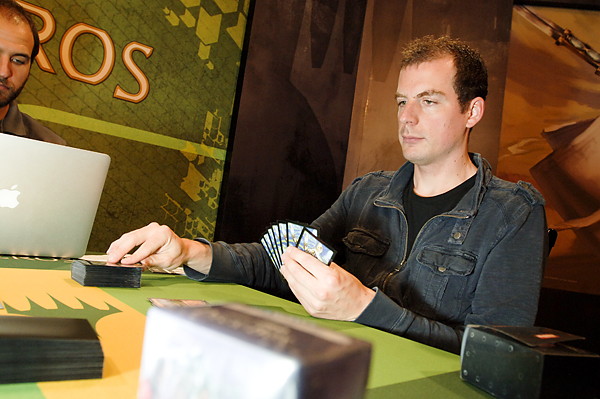 Cornelissen's devotion deck may have been only a prototype for many of the ones seen this weekend, but that didn't mean it lacked powerful starts.

Both decks were firing on all cylinders. Cornelissen started with Ash Zealot and Hammer of Purphoros, while Duke replied with Frostburn Weird and Thassa, God of the Sea. But what turned the match in the Hall of Famer's favor was that he found his Nykthos, Shrine to Nyx first, and multiple copies at that. He used his first to make a fourth-turn Purphoros, God of the Forge and smashed face to take Duke to 10. On the next turn, though Duke had successfully filled his board, Cornelissen's showcased exactly what you can do with a second copy of the legendary land.

Cornelissen tapped two Mountains and activated Nykthos to make five mana (Ash Zealot, Hammer of Purphoros and Purphoros, God of the Forge on the battlefield). He used two mana to cast another Ash Zealot, taking his devotion to seven. He played the second Nykthos, binning the tapped version, then used two of the floating mana to activate the fresh copy and made enough mana to overload Mizzium Mortars. This time it was Duke who would have to evacuate his men from the field.

The attack step brought enough damage to seal the deal for Kamiel Cornelissen and seal the tournament fate of Reid Duke.