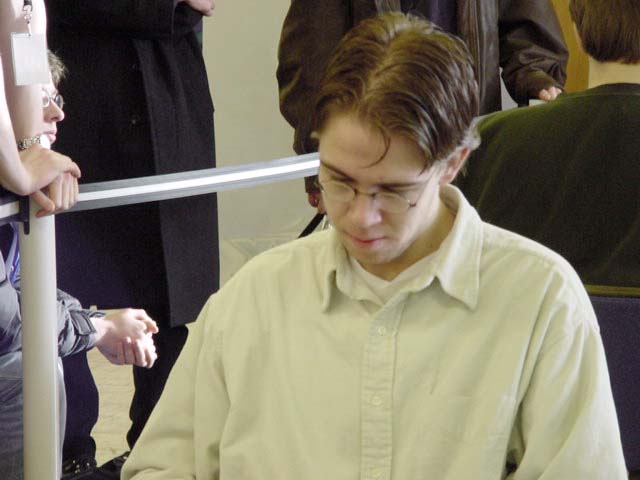 The last round created an all-Dutch battle for one of the remaining Top 8 places. While not exceptionally well known Alexander Witt and Bas Postema have both been on the Pro Tour. In fact they usually end up playing each other in the finals of PTQs in Holland. Witt was the Dutch Champion in 1999.

Witt had drafted a white/green deck with harrows and a splash of red. Postema had drafted blue/black. Witt won the coin flip and elected to start.

It seemed both their decks had an understanding of the importance of the match and came down with a shot of nerves as they both mulliganed to six. Witt started with a nice mana curve of Llanowar Knight, Benalish Lancer without kicker and then Razorfoot Griffin. Postema traded off on the ground but looked under pressure as Witt made a second Razorfoot Griffin. An Urborg Emissary slowed down the attack, but the Griffin soon returned and a Kavu Climber and Serpentine Kavu followed it out of the woods. Postema was able to hold up the ground but Battleflies were not enough to stop the first striking Griffins. A Rampant Elephant was the final nail.

Witt mulliganed again and soon found himself under pressure from a swarm of 1/1's. Verduran Emissary traded with Urborg Emissary but the little guys, Tidal Visionary, Dream Thrush and Ravenous Rats, eroded Witt's life total. So much so he was forced to stop using a Trapper and leave it to block. Then the big guys appeared as Witt summoned a Serpentine Kavu and then Postema a Zanam Djinn. That proved too much and Witt hit the button. Seven land on the table, one of them a Tinder Farm, equals six RR. OBLITERATE!

Problem was Postema knew Witt had the reset button and recovered much quickly. He laid a land every turn afterwards and started summoning monsters when he reached three mana. By the time Witt had two land he was facing an army with a solitary Llanowar Knight. The Obliterate was not on the team that game.

Witt sacrificed a Tinder Farm on turn three to make a Razorfoot Griffin. It seemed a strange play but looked effective as he got in some early damage while he waited for a plains for his second Griffin. Postema looked to have clear card advantage as he cast two Probe in quick succession but while creatures traded on the ground the Griffins still ruled the skies. Postema couldn't have been happy to see a Serpentine Kavu either. Rather than chump through, he chose to attack back even though Witt was on much more life. Another attack and Postema was on two to Witt's 16. When Postema attacked with everything the next turn it looked like the white flag was waving. Witt traded off some creatures and went down to 12. All that was left was one more attack. Then, just as Witt was about to attack, Postema cast Breaking Wave as an instant! All Witt's creatures were tapped. Postema couldn't attack for enough damage though, but he'd shown how close the game had been. As Postema said afterwards, had Witt taken his all-out attack as admission of defeat and taken the damage, easy to do when you're on 16, he would have lost.