Round 14 Feature Match: Back to the Drawing Board

Sam Stein is with Hand in Hand, a versatile creature deck based on the power of the Orzhov. Gabe Walls brings green-white Ghazi-Glare featuring hordes of little green men and one giant white dragon. Both players were on the Top 8 bubble here, with Stein looking to secure a wobbly claim to 8th place on tiebreakers and Walls needing a win. 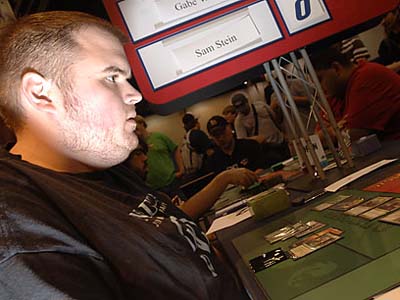 Gabe Walls needs to win it to be in it.

The players shook hands and checked their openers. Walls had to mulligan but kept his next six.

Stein roared off the starting blocks with a Hound of Konda and then a Descendant of Kiyomaro to Walls' Selesnya Guildmage. Walls played a Jitte and a bounceland, keeping his hand full, but Stein had more cards and got in with Konda's puppy and the inflated Descendant. Stein got down Ghost Council of Orzhova and a bounceland of his own.

Walls responded with Loxodon Hierarch, going up to 14. There was no time to equip Jitte. Then Stein dropped Eight-and-a-Half Tails and a bounceland.

The 8.5-tailed samurai across the table was trouble, and Walls had several options in hand. He settled on Glare of Subdual and Llanowar Elves. He tapped Stein's Ghost Council before attacks, but Stein activated Mr. 8.5 to protect it from Glare. Walls tapped Guildmage and then Hierarch at the Council as well, which finally got the legendary Council to tap. Stein was able to swing hard with so many of Walls' permanents tapped, bringing Walls to 7 and himself to 23. He sacrificed the doggie after combat to drain Walls for 1 (down to 6) and to get Ghost Council to untap.

Walls found his trusty Miren, the Moaning Well, and equipped Jitte to Guildmage, who popped in for damage after some Glare tapping and stuck the fork firmly into 8.5 Tails. He finished up with a Watchwolf.

Stein had a big turn too: Shizo, get guys tapped, another Eight-and-a-Half-Tails, Dark Confidant, and Umezawa's Jitte, which killed its twin with the legend rule.

Walls had a complex board to consider yet again, and managed Kodama of the North Tree. Dark Confidant revealed Mortify, which promptly blew up Glare. Walls got a move on with Hierarch, and had Miren to keep his life total plump and juicy.

Meanwhile, Stein started whacking in with a fear-inspiring Ghost Council courtesy of Shizo. Walls found an answer in Yosei, but Jitte was Castigated before the big dragon could wield it to beneficial effect.

With Walls at 5 from fear beats, he attacks with Yosei and North Tree, telling Stein to "Figure it out." Stein blocks nothing and goes to 6. In Walls' own end step he sacs Yosei to Miren, tapping down as much as he can-but 8.5 tails prevents the tapping. Walls had gone up to 10 however and was out of immediate danger.

Bob revealed land, and Stein cast another Bob to sac to drain-and-untap Ghost Council. Walls has momentum, and crashes in with Watchwolf, Guildmage, North Tree, and a saproling.

Walls: "If you don't have Shining Shoal it's lethal."
Stein: (still thinking and arranging blockers) "Okay."
Walls (to the crowd): "Sam is awesome!" 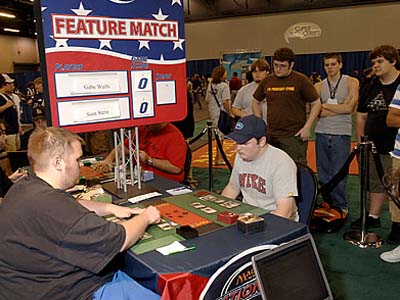 Stein indeed had the Shining Shoal, pitching a second Ghost Council, enough to prevent damage to his blockers, live through the turn, and smash back for return-the-lethal-favor.

Walls's early Jitte was one-upped by not only Hand of Honor, but a Manriki-Gusari to break Jitte in half.

Walls fortified with Vitu-Ghazi, Wood Elves, and then Hierarch. Stein created a Jitte of his own, which Hand of Honor picked up as well. The Hand got in a fight with the Elves and Hierarch, and though the Elves were Last Gasped, Walls responded with a Shining Shoal, giving lethal damage to the Hand anyway. Stein replaced it with Descendant of Kiyomaro.

With all Stein's equipment laying around like a messy kid's bedroom, Hierarch was safe to proceed directly to the Red Zone. Descendant picked up his room and hit back, and Hound of Konda joined the field. The elephant died the next turn to a Last Gasp and a Jitte counter, after which Walls Seed Sparked the legendary fork to gain some breathing room, not to mention saprolings.

Stein showed his trained pooch how to wield a Manriki-Gusari and headed in. After combat he made Bob and another Manriki-Gusari. The saprolings got in for a couple, and Walls decided it was time to Wrath. He dropped a backup troop in the form of Llanowar Elves, hoping finally to get beats on in earnest.

Stein only had Jitte, so the mohawk elf got in for a point and was soon joined by Wood Elves, Watchwolf and some Vitu-Ghazi-generated fungus. Walls didn't even blink when Stein ripped Ghost Council and triple-equipped it; he Shoaled damage back at the Orzhov Council when he crashed in with the team. Bob picked up Jitte and the Gusaris next, and Walls made a second Jitte to blow it up. Some elves died, but Walls crashed on in then Wrathed away Bob after combat. 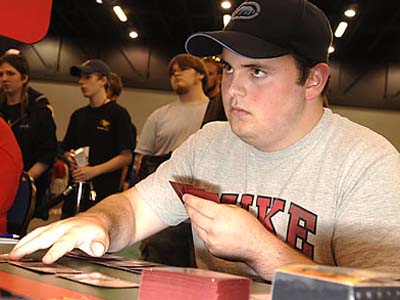 "End of your turn, Congregation at Dawn."

As the round ticked down, Walls revealed Carven Caryatid time two and Yosei. He untapped and played the two cantrip 2/5s one after another, equipping one. Stein Mortified the equipped one of Walls's walls but was victimized by the follow-up Yosei.

There was no time to start Game 3, but neither player wanted to concede or leave it a draw. Walls asked one more time whether Stein would concede, and he said no, so Walls took the tough beat and wrote 2-1 in Stein's favor on the slip.

Gabe Walls is out of contention for the Top 8, and Sam Stein is on the cusp, hoping to ride in on tiebreakers.