Round 14 Feature Match: Black and Blue

It was an all-SCG grudge match. On the left, Josh Cho, an up-and-comer working with Team SCGBlue, a fledgling team headed by Gerry Thompson and Brad Nelson that intends to grow some new American talent.

On the other side, Gaudenis Vidugiris is playing for their intra-league rivals, Team SCGBlack, the star-studded superteam that recently fell under the Star City Games banner. He is playing their Geists deck, a last-minute brew by Sam Black. Cho is playing SCGBlue's version of the wildly popular White-Red-Green Wolves and Angels deck. 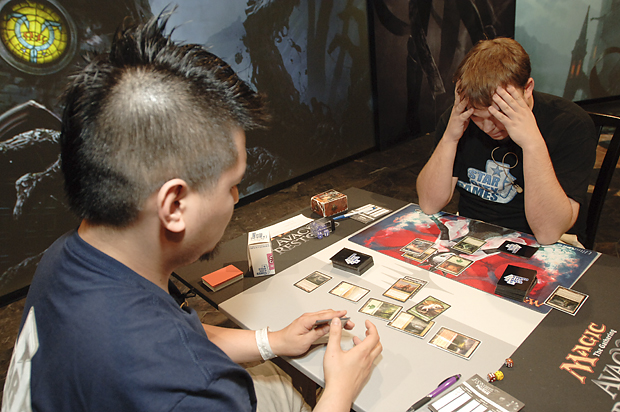 It's an intra-league grudge match!

Cho won the roll and chose to play. Despite fixing his mana with Evolving Wilds, he didn't make a play until turn four. In the meantime Vidugiris managed a Strangleroot Geist before taking a turn off for a Wilds of his own. Cho went bigger with Huntmaster of the Fells. Vidugiris fetched an Island at end of turn. He untapped and went deep into the tank. He had no fourth land, and eventually settled on a Geist of Saint Traft.

Cho played out Gavony Township and swung in with his wolf token. Vidugiris declined to block. Cho passed and flipped his Huntmaster, killing the Strangleroot Geist, who came back as a 3/2. Vidugiris couldn't swing, so he just played an Invisible Stalker. 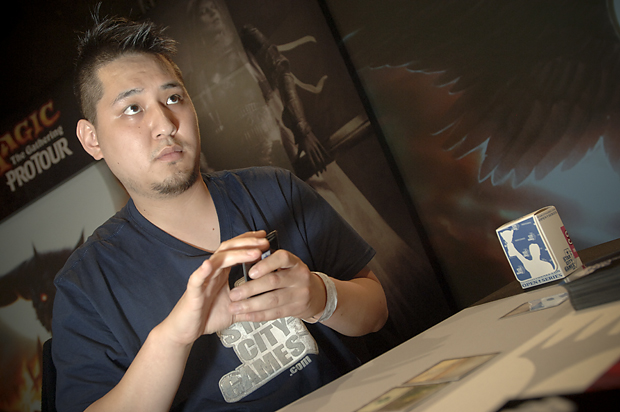 That's when Cho gave him the backbreaker: End of turn, Restoration Angel flickering Huntmaster, getting another wolf. Untap and wipe your board with Bonfire of the Damned for two. His attack left Vidugiris at just 5 life. Another turn was all it took.

Vidugiris looked frustrated as he took a mulligan, and his expression darkened as he had to ship back his six.

"Don't worry," said Cho, "if it makes you feel better I'm going right along with you."

Vidugiris smiled. "It does. It really does."

They each kept their five and began.

Vidugiris had forest and Avacyn's Pilgrim, then an Evolving Wilds. Cho played out a pair of Gavony Townships and hoped his colored mana would show up soon. Vidugiris fetched up a second forest and played another Pilgrim.

Cho's deck took pity on him and gave him the Forest he needed for Scorned Villager. Still on two land, Vidugiris decided to go for it, tapping his lands and Pilgrims for Increasing Savagery on one Pilgrim.

Cho was also rolling along. Borderland Ranger fetched him a Mountain, setting him up for a Huntmaster of the Fells the next turn. Vidugiris needed a land, and Abundant Growth got him an Island, allowing him to play Geist of Saint Traft. Down came the Huntmaster as expected, but now Vidugiris had the mana to go big with Wolfir Silverheart, paired to his Geist. He swung in with the 6/6 Geist and its Angel buddy. Cho chumped with a wolf token and took 4.

Cho had another Huntmaster and an Avacyn's Pilgrim, but still not enough to deal with Vidugiris's supercharged squad. The 6/6 Pilgrim, 6/6 Geist of Saint Traft, 8/8 Silverheart and 4/4 Angel all hit the red zone. Cho decided to just chump the Silverheart and let himself fall to 2. Abundant Growth meant he couldn't even flip his Huntmasters. Cho drew and passed, trying to flip them, but Vidugiris had Wolfir Avenger at end of turn to keep that from happening. 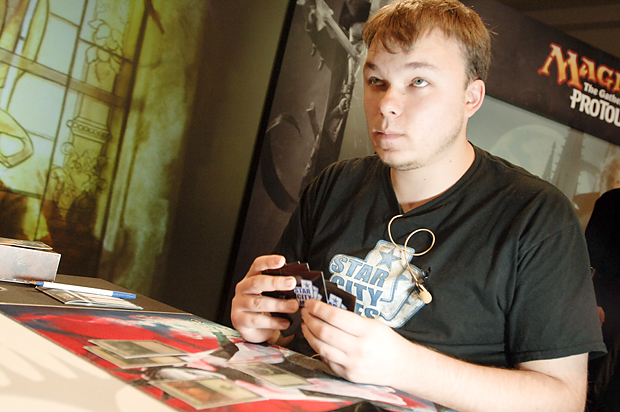 The name of the game? Big scary ghosts.

The whole team hit this time. Cho made a desperate bid to survive, flashing in Restoration Angel to get a little more life and an extra wolf. Brimstone Volley hit the Avenger as Cho chumped with his entire squad. He needed a miracle, but didn't get one.

Again Vidugiris was denied the luxury of a standard seven-card hand. You could see it written on his face that he couldn't bear to go out like this.

Cho led with Forest and Pilgrim, then Gavony Township and a 2/2 Mikaeus after Vidugiris played Hinterland Harbor. Vidugiris kept his play meticulous, considering all his options before making a move. He chose to Silent Departure the Pilgrim and play Evolving Wilds.

Cho untapped and replayed his Pilgrim, along with a Wilds of his own. Vidugiris fetched a plains, then untapped and dropped Geist of Saint Traft. Cho grew his Mikaeus and got a plains. He untapped and didn't care for his options. Eventually he swung for a point with the Pilgrim, then played Clifftop Retreat and another Pilgrim before passing.

Vidugiris wasted no time continuing his plan. Four mana meant Increasing Savagery on his Geist, and he bashed in for eleven damage after Cho declined to block. Cho augmented his squad with Mikaues, then untapped, and passed with all his mana open. Vidugiris frowned. He looked over the board, then, with a shrug, tapped two for Spectral Flight. He swung in and looked up expectantly at Cho. Cho counted up the incoming damage, then extended the hand in defeat.