Those of you who read all the coverage available will have seen the deck tech article on the mono-black metagame deck called Pirates. The deck is still present on the top tables and here Craig Stevenson is trying to pilot it into the top eight. Peter is playing a white weenie Punisher type deck with a few rogue changes. It’s probably fair to say that you would have got long odds on these two decks playing off for a top eight spot. 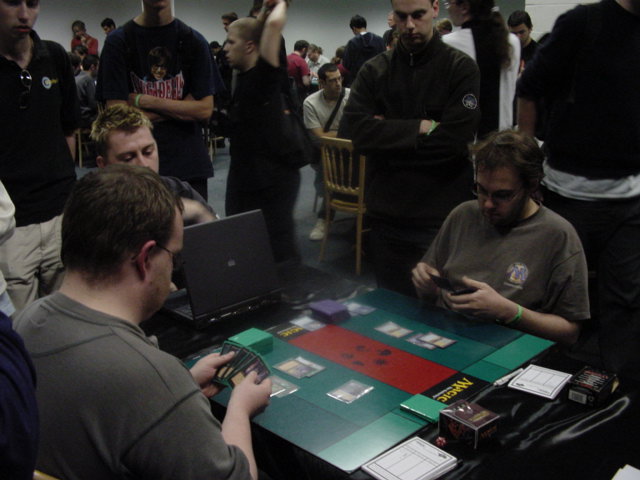 Stevenson didn’t have a third land, so he just played a Zombie Infestation and attacked with the Fiend. Peter made a Tireless Tribe. At the end of his turn Craig made a Zombie discarding Ichorid and Chainer's Edict. The Ichorid, Zombie and Fiend swung in after the Tribe was Edicted. This put Peter down to only ten. Gysemans cast Battle Screech and passed the turn. Craig attacked once more and a bird traded with Ichorid; two Zombie tokens knocking Peter to six.

His position was sufficiently precarious that Peter cast Quiet Speculation for Prismatic Strands and dropped a Beloved Chaplain, which bought him some time. The next attack was fogged, giving Peter chance to drop a Battle Screech and a Spurnmage Advocate. He started to flashback the Screeches, and because of the Beloved Chaplain, Craig could no longer attack with his creatures. After all four Screeches were flashed back and Peter started to fly across, Stevenson scooped. 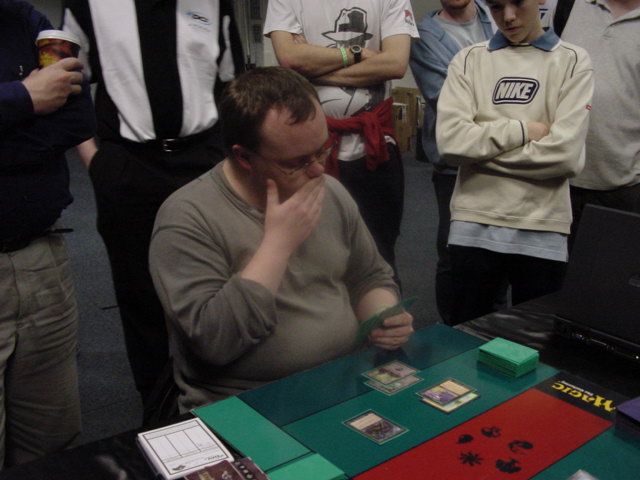 Peter had to take a mulligan, as he had drawn two Glory, four land, and a Confessor. His second draw was a lot better though. Peter played first turn Tribe, and second turn Beloved Chaplain. The Tribe was murdered by a Slithery Stalker, but Peter followed up with a second Chaplain and another Chaplain. There’s no doubt that these are the best creature for the match up.

Gysemans played a Divine Sacrament and then a third Chaplain. One of the Chaplains was killed with Chainer's Edict, but the situation looked bad for him. Luckily for the Englishman, he had a Mutilate, which cleared the board completely.

Stevenson used Faceless Butcher to kill off a Confessor, and began to beat down. Peter was stuck with only one Plains in play, and he needed a second for Battle Screech in his hand. Although he had three or four turns to draw it, he was unable to do so and the Faceless Butcher won the game for the Englishman 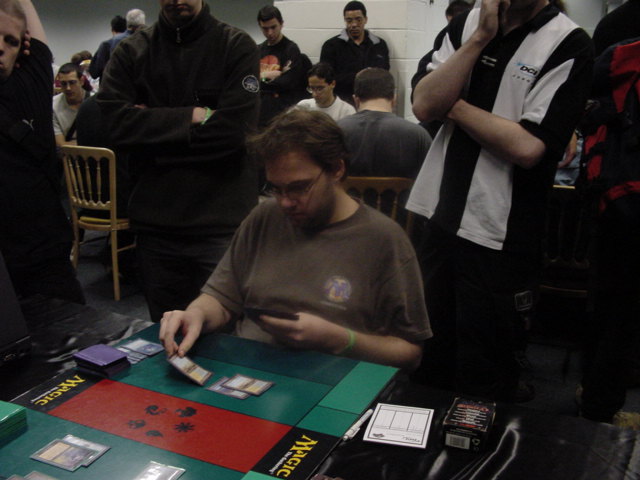 They began the game with only around fifteen minutes left in the round, and with a draw knocking them both out of contention. The Belgian had a no-land hand and had to take a mulligan.

Peter played a second turn Spurnmage Advocate and a third turn Phantatog, whereas the English player used Millikin to Accelerate himself into a third turn Braids. Peter had a poor draw, with multiple Battle Screeches, and without any creatures to cast, he found himself locked in an anticlimatic end to a good match.