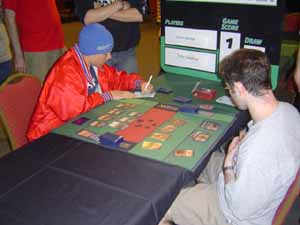 With just one round to go, both of these players found themselves on the verge of greatness. Their 10-2-1 records meant that a win would put them into the Top 8. Whatever pressure they felt was probably compounded by the fact that it would be their first big accomplishment. Derek Starleaf is an associate of Peter Szigeti and Brian Hegstad, and though he’s had more than his share of PTQ Top 8’s, he’s only just started to work the Grand Prix circuit. He’s playing mono-white control, starting Dragon Scales and Foothill Guides at Hegstad’s behest. That’s bad news for amateur Tony Goodson, who is playing Goblins. He’s qualified for the upcoming Pro Tour – Boston with his team of Valentin Moskovitch and Dan Eardley. He and his crew playtested the hell out of this format, and decided like so many others that Goblins was the best deck. Goodson hates it, but he’s still playing it.

Goodson mulliganed, and eventually led with Sparksmith, and while Starleaf cycled Eternal Dragon and Renewed Faith, got in with Goblin Warchief. Starleaf took the beats and then dropped Dawn Elemental. Goodson was forced to hold back. He made a second Warchief and was done. Starleaf complicated matters with a Silver Knight. Goblin Goon was no help. Starleaf was content to wait. 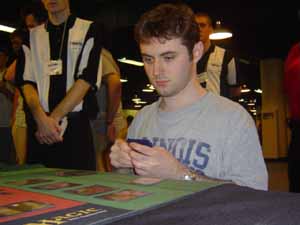 Goodson had nothing to do. Starleaf cycled Decree of Justice for three soldiers, then untapped and played Dragon Scales on his Dawn Elemental, finally able to go on the offensive. Goodson piled on a Siege-Gang Commander and Piledriver, but did not attack. Starleaf held three cards. He cycled an Akroma’s Vengeance, but still did not have an eighth land for Akroma, Angel of Wrath. He wiped the board with a second Vengeance after attacking.

Goodson’s Goon stared at Dawn Elemental. He made a second, but this time a cycled Vengeance turned up a plains. Akroma hit the table and took the game.

Again Goodson had to mulligan, staring at the ceiling as he did so. Then he went to five, and a nearby PTR was all smiles for Derek Starleaf’s chances. Then Goodman went to four. 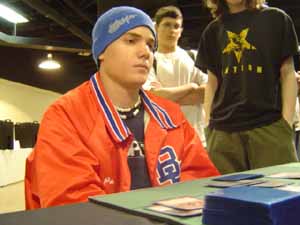 Unfortunately, Starleaf’s hand was also sub-par, and he fell first to six, then five cards. He didn’t need to go any further. He had double-plains and Silver Knight. Soon after he had Foothill Guide as well, and Goodson didn’t have anything on board. Goodson made a Goblin Sledder and fell to fifteen. He played his fifth land and a Siege-Gang Commander, leaving himself with just one card in hand. Starleaf cycled Renewed Faith, played his fifth land, and waited.

The four non-Commander goblins swarmed in, and the two that were blocked went directly for Starleaf’s head, leaving him at seventeen. Starleaf untapped and dropped Dragon Scales on his Knight, swung, and then made a morph. Goodson flung a goblin at it, but it was Foothill Guide, and survived. Rorix screamed in to bring Starleaf to eleven, but he had Pacifism to stop that cold. A Goblin Goon was likewise Pacified, and the Knight damage was adding up. Goodson’s next two draws were both mountains, and he extended the hand to Starleaf.