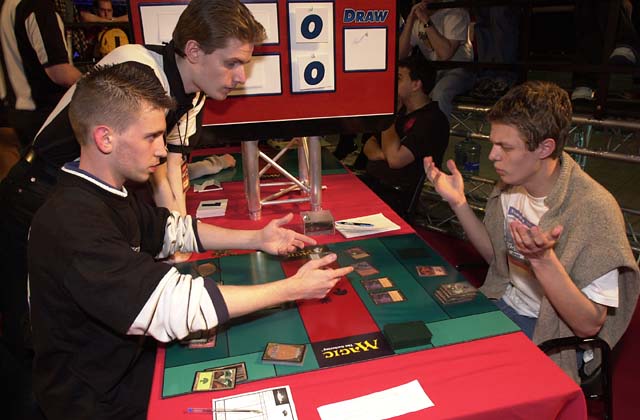 Battling for the Top 8 is a real pressure cooker. It was no surprise that Frank Canu and Yuri Kolomeyko came to the table with stoic expressions. If ever there was a time to focus on one's game, this was it.

Canu lost the die roll and was forced to play first. He lost two Forests to Kolomeyko's two Ravenous Rats, and used a Fertile Ground to speed into a Rith's Attendant. Kolomeyko matched it with Mire Kavu.

Canu looked at his hand, and decided to go for it. He tapped out for Nemata, Grove Guardian. Kolomeyko attacked with his Kavu and Canu let it through, and Kolomeyko kicked up a Duskwalker. On his next turn, he attacked with the Duskwalker and Mire Kavu. Canu made a Saproling and threw it in front of the Kavu, blocking the Duskwalker with Rith's Attendant.

Canu moved the token off the table, and Kolomeyko took this as a signal that the combat had ended. He tapped three mana and played Cinder Shade. Canu called a judge. The judge ruled that since Canu had removed his token from play, he tacitly accepted the assigning of damage and its resolution. Just because both players forgot to bury a creature does not mean they are still in combat.

So Kolomeyko got to make his Cinder Shade. Canu generated a token at end of turn. He untapped and cast Galina's Knight using Fertile Grounded forest, spending the extra mana making a second Saproling.

Kolomeyko swung with the Shade and Mire Kavu. Canu blocked the Shade with his Knight and let the Kavu by. Kolomeyko detonated the Shade a second time, removing the Stone Kavu.

On his turn, Canu attacked with his birds and kicked up a Pincer Spider. Kolomeyko's Ravenous Rat blowed up real good, taking down the Galina's Knight. When he attacked with the Mire Kavu, Canu traded it for his Spider. He untapped and flew in again, adding Verduran Emissary to his team. 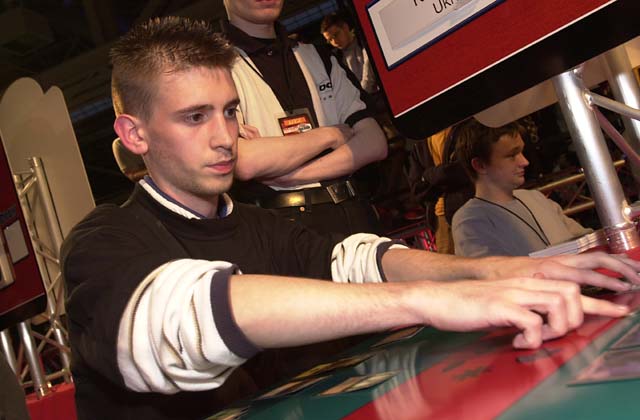 Kolomeyko attacked with his Calder Kavu and Canu blocked with Verduran Emissary. Kolomeyko pumped up his creature, but Canu went one better and played Gerrard's Command, sending the Kavu to the graveyard. Kolomeyko summoned a Mire Kavu, but looked in rough shape. Canu had three chump blockers, and a three-turn clock.

Kolomeyko turned it around, summoning Phyrexian Bloodstock and Urborg Phantom. In light of these new developments, Canu swung for one instead of three. Kolomeyko brought the whole team. Canu put on his thinking hat, and eventually chose to put a token in front of the Phantom and Kavu, stopping the Rats with the Emissary and taking three.

Canu Harrowed into all five land types, and Kolomeyko frowned in surprise. This impressive gesture did little to dissuade him from summoning an Ancient Kavu. Canu picked up his cards.

The first game had taken over half an hour, so Canu and Kolomeyko increased their play speed, with Canu snapping his cards into play and tapping them so fast they spun.

His first-turn Thornscape Apprentice met a Scorching Lava, and he followed it up with a Tower Drake. Kolomeyko made Phyrexian Battleflies and took two in the chops. On his next turn he tried to make a Lava Zombie, but Canu Harrowed into all five land types and Excluded it.

Kolomeyko had no further play. Canu made a Stone Kavu. Kolomeyko matched him with Mire Kavu, but Canu summoned a Hunting Drake to give it time to think about what it had done. He hit for 5.

Kolomeyko replayed his Kavu and passed the turn. Canu's creatures swarmed into the Red Zone. Kolomeyko figured his best chance was to take eight. It turned out that was no chance at all. The series was even after seven minutes.

There were eighteen minutes left for Game 3. Kolomeyko's Ravenous Rats got a Shackles out of Canu's hand. He made a Pincer Spider, which Kolomeyko matched with a Caldera Kavu. Canu attacked while he was tapped out, and made a Mirrorwood Treefolk. Lucky for Kolomeyko he had nothing but forests.

Kolomeyko returned fire and cast an Ancient Kavu. Canu brought out Llanowar Cavalry, an excellent blocker in this situation. Kolomeyko showed his disrespect by attacking with both Kavu. Canu doubled up on the Caldera Kavu with his Treefolk and Spider. Kolomeyko pumped it to 4/4 and chose to kill the Treefolk.

Canu untapped and made a Verduran Emissary. Kolomeyko kicked up a Duskwalker. Canu used a Quirion Sentinel to get a white mana for his Sunscape Apprentice. Kolomeyko hit with the Duskwalker, then cast Hypnotic Cloud without kicker, knocking a forest out of Canu's hand, and summoned a Cinder Shade.

Canu attacked with both the Emissary and Spider. Kolomeyko's Ancient Kavu and Ravenous Rats joined in an unholy alliance to bring about the Spider's downfall. The Spider had its revenge in death, killing the Kavu with help from the Apprentice. 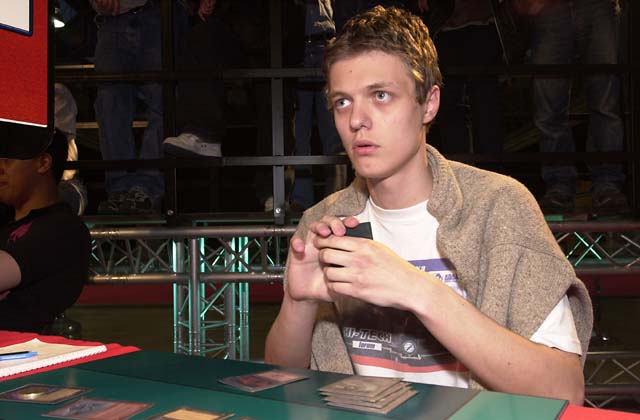 Kolomeyko answered in kind, sending in his Duskwalker and Shade. Canu put his Cavalry in front of the Shade, since Kolomeyko didn't have enough black mana to pump it to 4/4. He made it 3/3, and finished the job with Scorching Lava. An Urborg Phantom touched down on his side.

Canu thought hard before passing the turn. The writing was on the wall, and it said "You're going to lose. In no uncertain terms." Kolomeyko was not arrested for vandalism. This let him lay a swamp and attack with his Shade and Duskwalker. The Emissary and Sentinel did a number on the Shade, which was sacrificed after stacking damage to return the favor.

Canu drew and passed the turn. His Apprentice destroyed the Phantom on Kolomeyko's next attack, but he was dying faster than he was living. Kolomeyko Recovered his Shade and played it. Canu Harrowed into a Benalish Trapper.

Kolomeyko had no trouble deciding how to end the match. He leveled a Soul Burn at Canu's head.