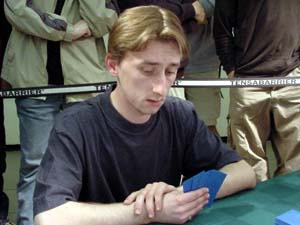 players have 31 points. The winner of this match will probably finish in the top 8, but has to cross his fingers and hope his tiebreakers will be good enough to make it while waiting for the final standings. Geoffrey Siron and Johan Dewez are both from the home country Belgium. Geoffrey has already had some good finishes, while Johan is the lesser-known player in his first day 2 appearance. They know each other, resulting in a relaxed atmosphere for this crucial match.

Both players brought an Elf-and-Nail deck to this tournament. While Geoffrey had a fairly standard build (mono-green with a red splash), Johan played white for cards like Wrath of God, Eternal Dragon, Akroma's Vengeance and Exalted Angel.

Geoffrey won the die roll and elected to play first. He started the game with a Skullclamp, but missed his third land drop. On turn 4 he found Wirewood Herald that quickly got clamped in the search for lands. He found a Forest and a Birds of Paradise to get him back in the game. Johan put on some pressure in the meanwhile: turn 3 morph, turn 4 unmorph into Exalted Angel and attack. On his next turn he played another morph and a Skullclamp, which got attached to the Angel. Not the most common use of the powerful equipment, but it did give him the necessary boost to enable him to attack Geoffrey - who'd already taken some damage from Wooded Foothills - for exactly lethal damage next turn.

Geoffrey thought for a while on his turn and went crazy with Wood Elves and Skullclamp before he passed the turn, tapped out. His only out was the hope that Johan's morph was nót an Exalted Angel. Surprisingly, it was. Johan quickly flipped it over and swung for lethal damage. 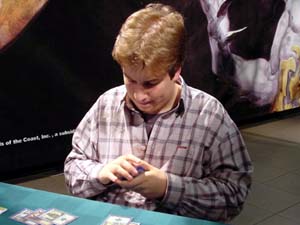 Geoffrey played first again and had early drops in the form of the Wirewood team: turn 1 Symbiote, turn 2 Herald. Johan went for mana acceleration like a madman: turn 1 Birds of Paradise, turn 2 Wood Elf that searched out a forest. Then he tapped that fresh forest to play a Birds of Paradise. He was going to have access to 6 mana on turn 3: an amazing start! Geoffrey could only muster a Vine Trellis and a second Wirewood Symbiote on his next turns and did some damage with his 1/1s. In the meanwhile, Skullclamp gave Johan the perfect follow-up for his already great start. He got rid of his Elf and Birds for 6 cards and cast 2 Vine Trellis. Geoffrey was really behind in this game and quickly needed something good. The best he could do though was Fierce Empath to fetch Kamahl, Fist of Krosa. The Empath was obviously a nice combo with his Symbiotes, but since he only had 4 mana and Johan was drawing 6 times as many cards per turn as him, it didn't feel likely that that was going to help him to get back in the game. Johan entwined a Tooth and Nail on his next turn and put Akroma, Angel of Wrath and Darksteel Colossus into play. The writing was now on the wall. Geoffrey had a Duplicant as removal for the Colossus, but he couldn't do anything to stop Akroma. Geoffrey laughed at the hopeless situation, thought, struggled, knew he was beat and congratulated Johan.