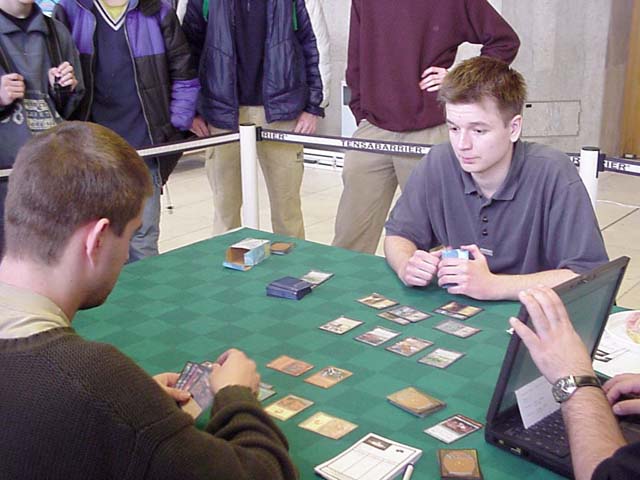 Gabor started out fast with a Stormscape Apprentice followed by a Sunscape Familiar. Slemr on the other hand played a Hooded Kavu that was tapped the first time it tried to attack. At the end of Gabor's turn, Jakub tried to play a Zap on the Apprentice but his opponent responded with a Daring Leap giving it +1/+1. When Gabor tried to cast a Sea Snidd it got hit by Exclude. He then cast his own Thunderscape Apprentice. His opponent cast a Samite Healer and another Sea Snidd. At the end of his turn, Slemr destroyed the Samite Healer with Crosis Charm.

Papp attacked with his Snidd and saw it being the target of Agonizing Demise with kicker thereby taking three damage. Jakub ended up playing Viashino Grappler he had just drawn. When his opponent wanted to cast a Faerie Squadron with kicker Jakub used an Undermine on it. Gabor seemed to have no more creatures than those he had just cast while Jakub was playing one creature per turn. Papp did get to cast a Glimmering Angel but it was only used to chump block. Shortly after he realized that he was done for and conceded.

This game it was Gabor's turn to be the aggressive one so that he started with Stormscape Apprentice together with a Glimmering Angel and later on a Voice of All with protection from black. Jakub had a Thornscape Apprentice and a Kavu Recluse on the table and didn't like both the voice and the Angel so he returned them to Papp's hand with a Rushing River with kicker. Gabor replayed the Voice but the Angel got countered by an Exclude, which gave Jakub a Zap that was used to kill the Apprentice. When Papp tried to play a Sunscape Battlemage with kicker, Jakub cast an Undermine. 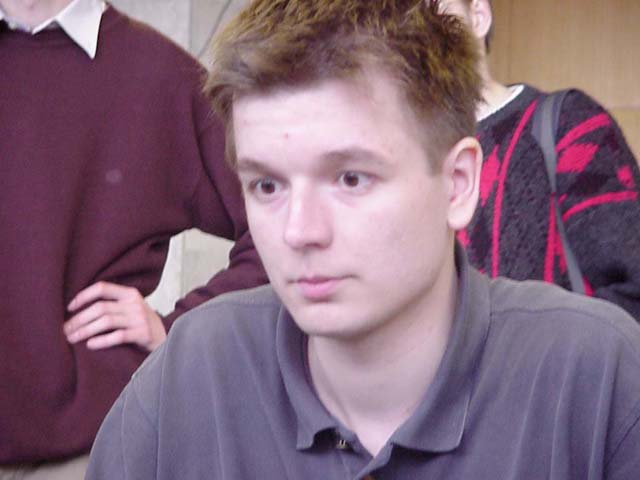 The next turn, Slemr pointed out at Kavu Recluse and mumbles something like: "Ok . . . it's attacking but before it is attacking this Swamp is a Forest. Some seconds later he realized what he had just said and laughed about it. A Grand Prix can be really tiring and wears you out so that you end up doing mistakes you normally wouldn't do.

After some turns Papp enchanted the Recluse with a Hobble. Since it couldn't attack Jakub used it to change his opponents land into a Forest. His opponent then played a Sunscape Familiar and a kicked Faerie Squadron. Gabor decides to swing at Slemr for five and both players were tied at four life. If Jakub didn't win that turn he wouldn't win at all unless he had a major trick up his sleeve. He attacked trying to make his opponent block with his 2/2 flyer in order to survive yet another decisive turn. Papp saw it coming, so he didn't block, went down to two life, and won the game. 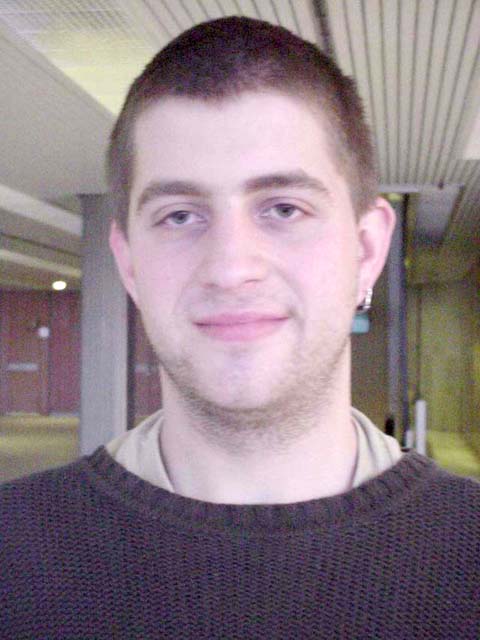 The tension was growing as we went into the last and decisive game. Both players were nervous. Papp missed his third fourth and fifth land drop, which is devastating in any game. Jakub removed the Obsidian Acolyte with a Flametongue Kavu and attacked with it next turn. In Jakub's hand there was still a Barrin's Spite and an Exclude to take care of any possible threats coming from Papp's side. Papp conceded since he only had two lands.