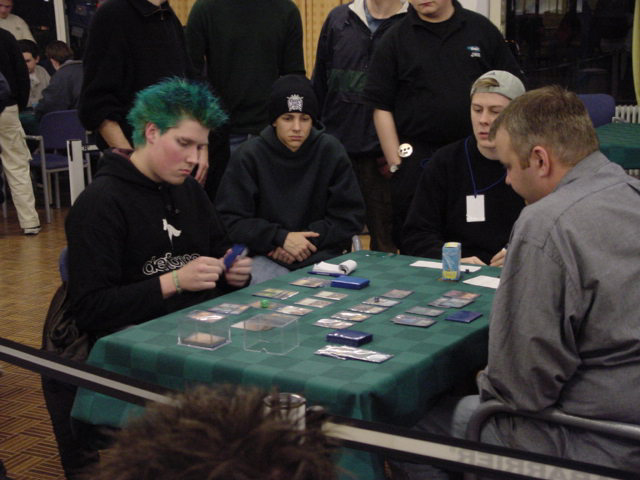 Each of these players needed to win this match to make the Top 8. James Stroud of the United States was on 32 points, and Rob van der Steenhoven of the Netherlands was on 31 points.

Rob started off, and James was forced to mulligan. Rob played out early creatures in the form of Ardent Soldier, Quirion Sentinel, and Ardent Soldier. Stroud summoned a Phyrexian Slayer on his fourth turn, but opted not to block when the Dutchman attacked with his Quirion Sentinel and Pincer Spider. This brought the American down to 13 life, but still Stroud was in an aggressive frame of mind, swinging with the Slayer, and playing a Rith's Attendant to block.

If Rob had held a creature removal spell at this point he could have brought James dangerously low on life, but he was only able to summon a Glimmering Angel. James looked like he would be in a strong position when he cast Probe with kicker next turn, as this brought Rob down to only one card, while Stroud had a good hand, including Halam Djinn.

However, the one card that Rob had was ideal, as he enchanted his Glimmering Angel with an Armadillo Cloak, and attacked to bring James down to nine. The American didn't have an answer to the Angel, so he played the Djinn, and attacked with the Djinn and the Slayer. Unfortunately he had forgotten about the Pincer Spider which could block and kill the Phyrexian Slayer.

Two turns later, Stroud had to scoop to the 4/4 Angel. 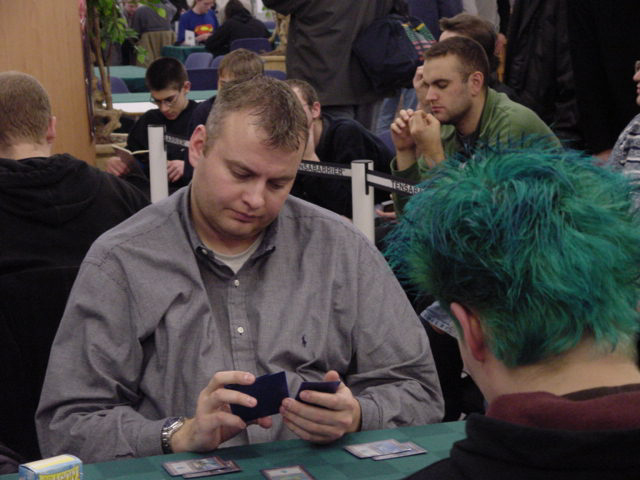 James went first in game two, and once again Rob attempted to go aggressive from the start. Despite his Llanowar Knight being Prohibited, he cast two Benalish Lancers (without kicker), although they only brought James down to 18 before the sturdy Rith's Attendant came into play to block.

The next few turns the players built up a flying force, Rob with an Angel of Mercy and an Ordered Migration for three, and James with a Faerie Squadron and a Phyrexian Slayer.

James was brought down to 13, as he opted to block and kill a bird token rather than trade his Squadron for the Angel of Mercy. James made a Vodalian Zombie and a Slinking Serpent, and Rob summoned a Pincer Spider with kicker. The Slinking Serpent began to Forestwalk for two a turn, but it soon emerged that James was the one who should be defending. Steenhoven played a Serpentine Kavu, which was Repulsed on it's first attempt to attack. Rob then did a large attack on his next turn - Angel of Mercy was blocked by Faerie Squadron, Phyrexian Reaper and Rith's Attendant ganged up on the Serpentine Kavu, and the Vodalian Zombie stood in the way of the Pincer Spider.

Once again the momentum swung, as James cast a Tower Drake and Lobotomized Rob. Rob's hand contained only two land and an Armadillo Cloak - so that Cloak and the one in Rob's deck were both removed from the game. This left the Slinking Serpent as an attacker, with Rob having no cards in hand of any relevance.

His next two draws were great though, first he peeled a Sabertooth Nishoba and then a Glimmering Angel. Another large attack phase from Rob followed, with a Vodalian Zombie blocking the Pincer Spider, the Phyrexian Slayer and Rith's Attendant double-blocking the Sabertooth Nishoba, a Tower Drake blocked the Glimmering Angel, and two Benalish Lancers hit home on Stroud, reducing him to nine. James opted to Recoil his own Phyrexian Slayer, and discarded a Mountain.

Rob drew a Phyrexian Infiltrator which made the game interesting, as well as a Smoldering Tar, which he used to bring Rob down to six when time was called in this position.

Both players were on six life. James had a Vodalian Zombie, a Phyrexian Slayer, a Slinking Serpent and a Phyrexian Infiltrator, Rob had a Bird Token, an Obsidian Acolyte which he has just cast and can use next to kill James, and lots of ground based creatures.

At the end of Rob's turn, James tries to exchange his Infiltrator for Rob's bird, but James tapped two of his three of his untapped plains to give the Bird Token protection from black.

Stroud tried again twice in his main phase, eventually gaining control of the Bird but then leaving himself with only two blue mana open. Still, he had the only card that would let him win the game - Sway of Illusion. This allowed him to turn all of his opponent's creatures green - leaving him with three unblockable two power creatures, the Slinking Serpent, the Phyrexian Slayer, and now the Vodalian Zombie.

Unfortunately this draw knocked both players out of contention for the top eight - James Stroud finished tenth, and Rob vd Steenhoven finished twelfth.