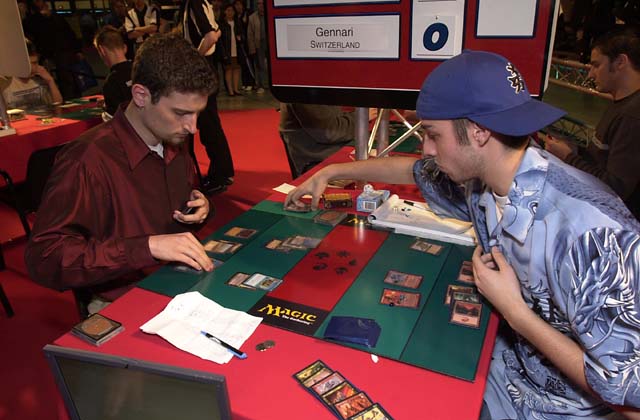 Raphael Gennari has been to six Pro Tours, but he had never before made Day 2. He had also never before had a Feature Match. However, in round 14 he found himself in the feature match area, playing for the Top 8, and playing against the best player in the history of the game. Gennari is from Switzerland and his best previous result was 2nd at Grand Prix Milan. Gennari explained before the match "If I win, that is good and if I lose, that is still good." Jon Finkel advised him that winning is better. The only previous Swiss player to make Top 8 at a Pro Tour was 1996 World Champion Alexander Blumke. Jon Finkel seemed to feel weird about playing the role of spoiler - it's not the role he's used to and his thoughts may have been drifting to his upcoming Masters semi-final match against Ben Rubin which would happen right after round 14 ended. Still, Finkel had several thousands dollars on the line in this match and he wanted to win no matter how anticlimactic it was.

Finkel played a turn 2 Galina's Knight and enchanted it with Wings of Hope on turn 3. Gennari slowed it down with Exotic Curse and then played a pair of beefy Kavus - Mire and Ancient. However, he lost all the rest of his hand to a Bog Down and a Probe with kicker - bye bye Plague Spores, Lava Zombie, Shivan Zombie, and Mire Kavu #2. 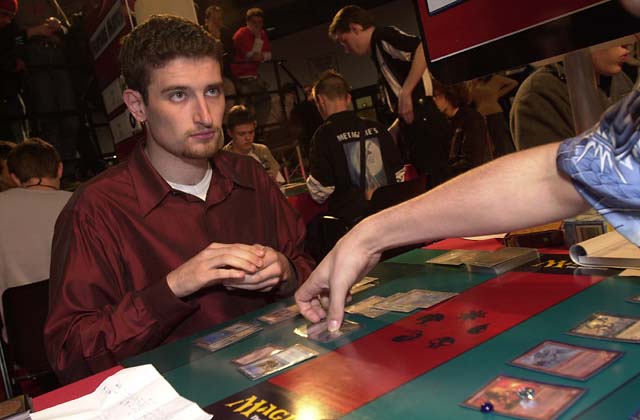 He played Galina's Knight off Crosis's Catacombs, then Wings of Hope. In addition, Finkel's Galina's Knight was down to 1-power, but its protection from red ability meant it was still a fine blocker. So was the Shoreline Raider that Finkel followed up with, but Finkel had other plans for it - he enchanted it with his other Wings of Hope and started applying flying beats. Gennari spent the rest of the game in top-deck mode while Finkel had a grip full of cards, including two copies of Dromar's Charm which could stop anything good that Gennari drew.

Gennari chose to draw first in game 2 and then had to take a mulligan. Finkel confided to me that he actually felt a little bit bad this time (whereas he normally feels like pumping his fist when his opponent mulligans). Gennari didn't play anything until turn 4, but he did go straight to 5 mana and followed up his Ancient Kavu with back-to-back Probes, each with the kicker. Finkel lost Recoil, Terminal Moraine, Swamp, and Dromar's Charm. The one card Finkel was able to keep, though, was Benalish Heralds. Gennari had the Terminate he needed to stop those Heralds from getting Finkel back into the game and suddenly two Pouncing Kavus joined Ancient Kavu on the attack and Finkel was quickly shuffling up for game 3. 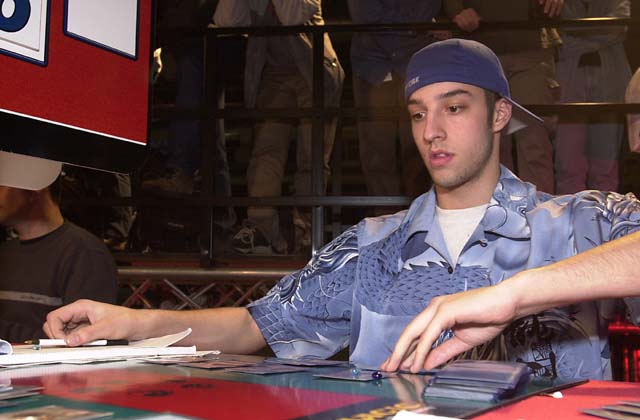 Gennari clasped his hands together in the form of a prayer as Finkel shuffled up his deck. The Probes kept coming in game 3 as Gennari knocked Shoreline Raider and Dromar's Charm out of Finkel's hand. However, this time Gennari didn't have an answer for Finkel's Benalish Heralds and it found Finkel some discard of his own. Finkel sacrificed two lands to Bog Down with kicker and Gennari watched in horror as all three of his cards - Hooded Kavu, Phyrexian Bloodstock, and Probe - all went to the graveyard. Gennari had nothing left but a Goham Djinn, which he attempted to ride for as much damage as he could. Gennari did draw Terminate to remove the Heralds before they got completely out of control, but Finkel was up four cards by the time Gennari found his answer. Finkel was eventually forced to start chump blocking the Djinn, but Finkel won the game with Glimmering Angels and two slim points of life to spare. There is some joy in Mudville, Mighty Casey has crushed some hopes and dreams.