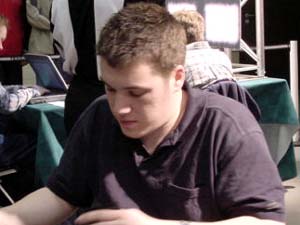 winner is in top 8, the loser top 16, as simple as that. Last time those two played, Bernardo tried to end Kai's thirteen win streak in GP Madrid but failed. So it's either revenge time... or Ravager time.We'll find out soon enough.

Kai wins the all important coinflip and both players keep their hand. Kai leads off with turn two Frogmite and Bernardo with two islands. Kai plays a third artifact land and an Enforcer on his next turn while Bernardo cycles a Dragon. Kai just sends his guys into the red zone on his fourth turn and says go. Bernardo pauses on Kai's EoT.

He finally settles on Thirst for Knowledge and discards a Mindslaver.

Bernardo indeed doesnt have two white mana sources and even has to discard due to the extra card from the Thirst. Kai sends his two guys in again and this time Bernardo hardcasts a Renewed Faith with damage on the stack staying at twelve lives. Kai lays a land and says go. Bernardo only plays a Citadel on his fifth turn and says go. Again Kai attacks and Bernardo just casts another Renewed Faith. Kai adds a Welding Jar and a Frogmite to the board, and this time Bernardo has the second plains to cast his Wrath but Kai follows with Enforcer, Disciple, Worker just to send them to the graveyard straight away as the belgian casts a second Wrath. Kai draws a Thoughtcast which gives him a Disciple but nothing else and Bernardo now seems in control of the game but that's before Kai draws another two Thoughtcast in a row before resolving a Skullclamp.

Kai passes with a Jar and a Clamp on board and Bernardo lays a land and passes straight back. Kai plays a Worker, a Frogmite and sacs the Worker to the broken equipment. Bernardo cycles a Decree of Justice for five soldier tokens. Kai then plays a Ravager and starts going off with the Skullclamp. He now has a double equiped Enforcer and a Ravager along with two Jars. Bernardo doesnt seem to have much action going on and just cycles and bring back a Dragon. Kai sacs several guys to double Clamp trying to finish the game with Disciples and Shrapnel Blasts. He finally gets a little black guy but Bernardo has Echoing Truth to bounce the Ravager in response and the Mana Leak to counter it when Kai plays it back. If Bernardo has Mindslaver there, he wins but all he can do is cast a mainphase Thirst and say go. Kai just resolves another Ravager and the first game is his with only twenty-six minutes left.

Both players keep their opening hand again and Kai starts off with a Skullclamp followed by another one, a Sphere and a Frogmite.

Kai: "Damping Matrix?"
Bernardo: "No, not that lucky."

Kai plays another Frogmite and equips the first one before swinging while Bernardo cycles a Renewed faith before casting a March of the Machines on his following turn. Kai just swings in for six, and plays a Sphere off his Glimmervoid. Bernardo doesnt have the game winning wrath but has a cycled Decree to take a couple artifacts down not before Kai could play a Disciple bringing Bernardo down to nine. The belgian still doesn't have the Wrath but can bounce both Frogmites with Echoing Truth. Kai swings again bringing the belgian down to six this time but he only has a Disciple and a Clamp left along with a Glimmervoid. Bernardo just gets back a Dragon on his next upkeep and Kai attacks for two again. Bernardo just passes on his next turn with eight mana untapped and Kai doesn't attack. Bernardo doesn't cycle a Decree but gains a precious six life with Renewed Faith bringing him back to nine after Kai played an artifact land just to deal one damage as the March is basically shutting his whole game down. Bernardo casts a Vengeance followed by an Angel on his next turn and another March after that sealing the game.

Bernardo: "C'mon, I deserve revenge."
Kai: "No, no, no, if everyone I beat deserved revenge...if everybody Gabriel beat in constructed deserved revenge, he wouldnt win a single match during the coming year."

They only have very little time to finish the third game though, less than ten minutes.

For the third time they both keep their opening hand and Kai leads off with turn two double Frogmite, Enforcer along with clamp and Sphere earning some laughs from the crowd.

Belgian guy in the crowd: "This guy is so good."

Bernardo can only play a second land as Kai sacs a Worker to the Clamp and swings in for nine. He swings in for eleven damage on the following turn bringing Bernardo down to one. Bernardo doesnt even has a Wrath and just extends his hand.