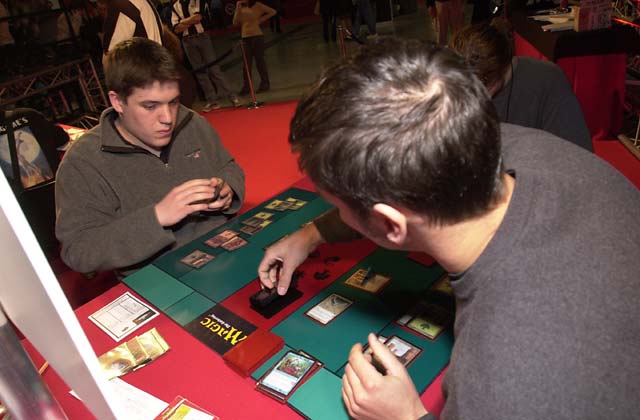 Both players knew that they had to win this final round to make the Barcelona Top 8. Kai had gone 0-2 with his g-r splash black deck, and didn't feel like he could possibly go 0-3 as it was not all that bad. Having said this he was not keen on facing a g-w-u deck.

Kai won the toss and elected to play after having mulliganed down to 6 again! Boy did this deck have issues with Kai. His start was reasonable though as he made a first turn Thornscape Apprentice, second turn Sentinel (burning for 1) then a third turn Thornscape Familiar. Unfortunately for him this was no match for an Armadillo Cloaked Galina's Knight which managed to attack once before trading with the two 2/1s. This left Kai on 13 with Markus on 24 with only a Thornscape Apprentice in play on the German's side. Jöbstl attempted to get the board advantage with a Slinking Serpent, but it was dispatched with a Lightning Dart.

On his next turn, Kai managed to get a Kavu Climber to join the fray, and for a couple of turns the Kavu and the Apprentice were racing an Aurora Griffin, but Jöbstl managed to Allied Strategies into a Prison Barricade to stall the ground. With the life totals at 15 - 7 to the Austrian Budde cast a Pouncing Kavu with kicker and attacked with both 3/3s, but he had no tricks to deal with the Barricade who soaked up one of the attackers.

The game was won in the next turn: Kai tapped the Prison Barricade with his Apprentice, but Gerrard's Commanded that the Barricade should untap as a 5/7 and join the 2/2 Griffin to deal lethal damage.

Again choosing to play first Kai made a second turn Thornscape Apprentice, whilst Markus had to cast a Treva's Ruins - bouncing his first land back to his hand, to make a Samite Pilgrim. Kai chose not to attack with his Apprentice and made a Viashino Grappler.

Jöbstl made no play on his third turn, so Kai attacked with his Grappler which was blocked by the Pilgrim. The Grappler was given first strike, but Markus had a Gerrard's Command which would have killed the Viashino had it not then received an Explosive Growth. Due to the first strike damage the Pilgrim took its leave and Kai passed the turn.

With still no damage dealt this game the u-w-g mage made a crippling play on his fourth turn: A Samite Archer. Kai glanced down at the board and a little whimper escaped his lips as he looked forlornly at his one-toughness creatures. Figuring they were going to die soon anyway the two creatures attacked into the Samite Archer, who happily stepped aside, then he cast a Thunderscape Battlemage with the black kicker forcing Jöbstl to discard a plains and an Aurora Griffin. The Samite Archer then did a main phase 'pinging' of the Viashino Grappler and the turn was passed back to Budde. 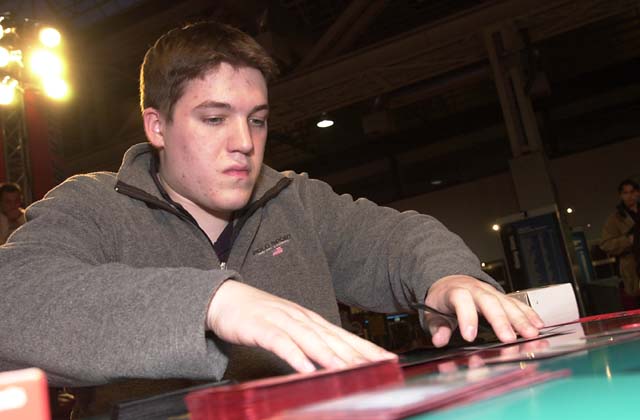 Taking full advantage of the lack of blockers Kai made a Pouncing Kavu with kicker and tore across the runway for another 8 points of damage to reduce his opponent to 8, but at the end of the flight path appeared a brick wall: Moat (naming red), so that was likely to be the last time those red creatures could attack.

Deciding he needed to find answers quickly Kai randomly cast an Aggressive Urge and tore a Plague Spores off the top to deal with both the Treva's Ruins and the Samite Archer. The next few turns saw a Galina's Knight once again Cloaked up and serving for 4, but as per the last game it was double blocked by a couple of green 2/2s and the board stabilized.

The Austrian managed to rip a Zanam Djinn off the top and started serving for 3 a turn (the Moat prevented it from being a 5/6), but Kai had an equally strong reply in the shape of a hasty Serpentine Kavu. In a stroke of brilliance, well I suppose good competence, Kai finished the game by Singeing his own Pouncing Kavu to make it black (so it could get past the Moat) and serving for lethal damage.

Markus had the choice of whether to go first or not and gladly took the first turn, with both players keeping their seven card hands. His Trapper was Strafed immediately, but Kai had to put a Rith's Grove into play to do so, thus retarding his plays by a turn. The game then progressed reasonably slowly as a third turn Thunderscape Apprentice went unchallenged or joined until a fifth turn Stone Kavu loped into the game. Kai then attacked with his 1/1 into the beast who took a brief look at the tiny dude and whimpered away fearing a growth spell, then Kai cast a Sentinel and an Aggressive Urge in the hopes of finding a land - he did.

The spectators must have thought the game was almost over when Markus once again made an Armadillo Cloak and spanked Kai for 5, then laid a Stormscape Apprentice. Once again looking for answers the immediate problem Kai cast an Aggressive Urge to cycle. I am sure it helped as the German's next turn was a wrecking ball: Thunderscape Battlemage with both kickers! The Cloak was put in the bin - as was his opponent's hand.

Ahead of the life battle, Markus still rallied reasonably well from this blow and laid a Samite Pilgrim, but Kai went one up on that: On his next turn he cast Quirion Sentinel then Darigaaz the Igniter! That was not the end of the world for Markus though as he had a Stormscape Apprentice still in play to tap the huge dude. In an attempt to deal with the tapper, Kai cast a Lightning Dart in his opponent's upkeep, but it was Repulsed and recast. If Kai had done this at the end of his opponent's turn he would have won the game outright, but his decision was fair enough as it was giving Markus an extra draw phase to deal with the removal spell. 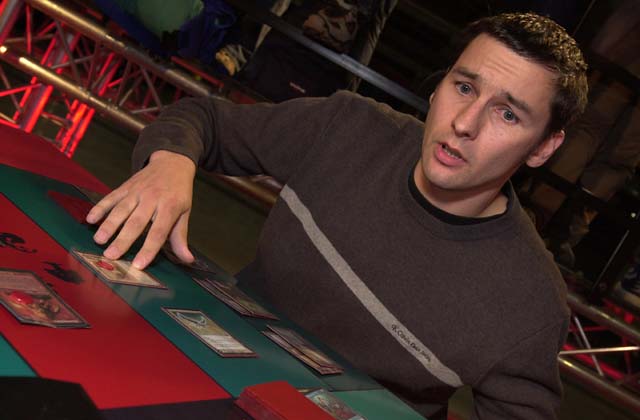 Despite the Repulse the Dart still gave the German a window to attack for 6 with the Dragon before the tapper became active again and he activated the ability on the Dragon naming white but Jöbstl's hand only revealed a Sparring Golem and a land. Still - this left the life scores at 8 - 12 to Budde as his Thunderscape Apprentice was sucking the life from the Austrian for one a turn.

In an attempt to make Markus tap his Samite Pilgrim Kai did a Beta Strike after his Dragon was tapped (like an Alpha Strike, but with one less creature - he held back his red Apprentice). Various blocks were made that forced the Samite to protect at least one of the blockers to gain some kind of advantage from the melee. With the opening he needed to kill the tapper, Kai then cast Singe once again for the win. With no answer to the Dragon Kai delivered the final 7 points of damage with the Apprentice black ability and the Dragon sweeping on over for 6.