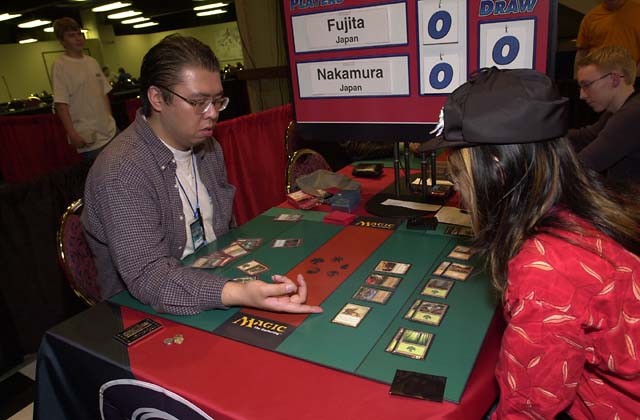 There's a world of support behind Kenichi Fujita. A victory in this final Swiss round could make him the first Japanese player to make Top Eight at a Pro Tour. Unfortunately, to do it he'll have to best longtime friend and Pro Tour veteran Satoshi Nakamura.

Both players had turn-one tappers, but Nakamura's draw was fast, with Quirion Sentinel and Llanowar Knight. The Knight traded with Fujita's Shoreline Raider, and Fujita Prohibited a kicked Ardent Soldier.

He couldn't find any further creatures by turn six, letting Nakamura lay into him with the Sentinel and a Rampant Elephant. Fujita played a kicked Lancer next turn, but Nakamura's Thornscape Apprentice made way for his attackers.

Nakamura's army acquired a Wayfaring Giant. He tried to use a Rampant Elephant to push through lethal damage, but Fujita held a Deliver for the Giant. He untapped and Washed Out Nakamura's green creatures. Nakamura replayed the whole gang. Fujita answered with a kicked Vodalian Serpent.

It wasn't enough. Nakamura's Thicket Elemental turned over a Thornscape Apprentice. He tapped Fujita's tapper, untapped, and swung for the win.

Again, both players had turn-one tappers, but this time they traded. Fujita played a second one. Nakamura used Quirion Elves to accelerate into a Rampant Elephant. Fujita locked it with his Apprentice.

Nakamura's offense swelled with Llanowar Knight, Quirion Sentinel and Kavu Chameleon. Fujita Washed Out for green and flew in for three. Nakamura replayed his two-drops and took another three from the fliers. His next play of Pincer Spider was Prohibited and he fell to seven.

Fujita kicked up a Serpent and knocked Nakamura to four. Nakamura couldn't find flying defense. Two attacks later it was 1-1.

Game three saw Nakamura mulligan into a powerful six-card hand. He played Llanowar Knight, then Quirion Sentinel and Aggressive Urge for damage. Fujita played a Tower Drake and stopped the bleeding with a kicked Prison Barricade. Nakamura made a Kavu Chameleon; Fujita, a Razorfoot Griffin.

Nakamura tried to use Aggressive Urge and Rampant Elephant to kill the Griffin, but Fujita had the Stand to save it. Fujita played a Stormscape Apprentice and Wash Out. Nakamura turned his Chameleon blue, but Fujita still named blue, unsummoning his tapper and Drake.

Nakamura Harrowed and replayed the Chameleon. Fujita held back, recasting his Apprentice and Drake, and then another Apprentice. Nakamura untapped and played Thicket Elemental, gaining a Horned Cheetah. With this newfound fatness he went on the offensive. His 4/4's charged and Fujita traded his Tower Drake for the Chameleon.

This meant that his Shoreline Raider wasn't the powerhouse it could have been. Fujita was forced into a series of trades, losing Barricade, Apprentice and Raider for Elemental, Sentinel and Cheetah, but falling to one in the process. He managed to Exclude and Prohibit Nakamura's next two creatures, and topdecked Glimmering Angel.

He hit once, but was forced to hold back because of Nakamura's Thornscape Apprentice. He lost the Angel to the Knight in a bid to stay alive. Nakamura drew a second tapper, and Fujita had no answer.