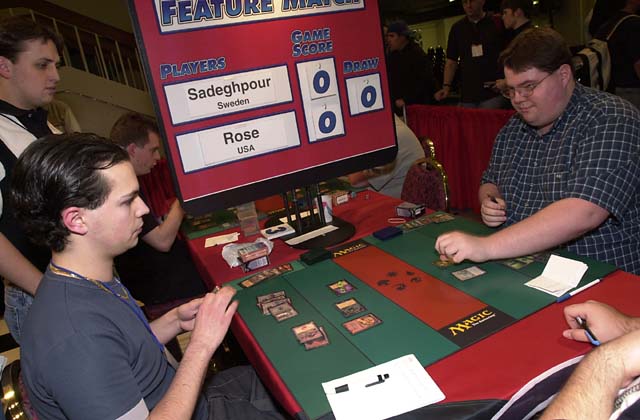 Kyle Rose was American National Champion in 1999 and won Pro Tour London in 1999. Johann Sadeghpour is a strong Norwegian player, and he's trying to make his first Pro Tour Top 8. Kyle is likely to make Top 8 regardless of the outcome of this game, but Johann needs a win to make Top 8.

Kyle opened up game one with a turn two Quirion Elves. Johann, noting that Kyle had played the Elves off of two forests, decided to get rid of them before Kyle could take advantage of the White mana they could produce. He used a Tribal Flames on them, but it was fairly for naught, as Kyle laid a Plains the next turn, and then cast a Pincer Spider. Johann didn't have anything else to do, so he simply bided his time. Kyle got anxious, and played a Charging Troll without being able to regenerate it, not thinking that Johann would have a damage based answer to the Troll. He did, though. A Lightning Dart blew away the monster, and Kyle was left with his original Pincer Spider.

Johann laid a Kavu Scout, and Kyle played a Sunscape Apprentice. Johann attacked with the Scout, and Kyle blocked with his Apprentice, and traded an Aggressive Urge and Orim's Touch for the Kavu. On Kyle's next turn, he summoned a Thornscape Apprentice that didn't live longer than a turn, as Johann blew it away with a Plague Spores. Kyle had more things to do though, as he played an Armadillo Cloak on his Spider, but it didn't last for long, as Johann tried to use Agonizing Demise on it (with the kicker) but Kyle moved it out of the way with his Sunscape Apprentice. This denied Kyle a draw phase, which didn't help him deal with the Urborg Shambler and Duskwalker that Sadeghpour was attacking with. 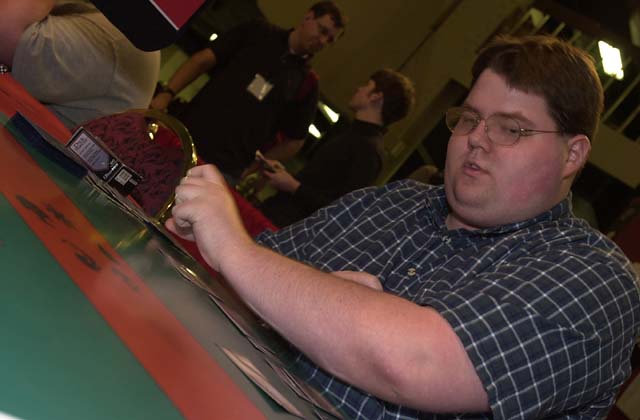 Kyle didn't like his opening hand in game two, but kept it anyway, hoping to draw into the mana he needed. He again laid a turn two Quirion Elves (naming white), and used it on his third turn to play out a Llanowar Knight and a Thornscape Apprentice on turn three - without playing a third land. Johann tried to take advantage of the mana problems that Kyle was experiencing, so he cast a Zap. When he laid the card out on to the red zone, he pointed first at the Thornscape Apprentice, then pointed at the Quirion Elves saying "This one." Kyle wasn't pleased with this, and a judge was called over to sort out the situation. He simply had the players back up and start over. The Quirion Elves hit the graveyard.

Kyle was annoyed. He drew his card for the turn, threw it down on to the table, and proclaimed "EAT IT." He had drawn a Plains. With that Plains he laid an Obsidian Acolyte, and then on the next turn Armadillo Cloaked his Llanowar Knight. Even after a Probe, Johann never drew an answer for the Protection from Black creature. 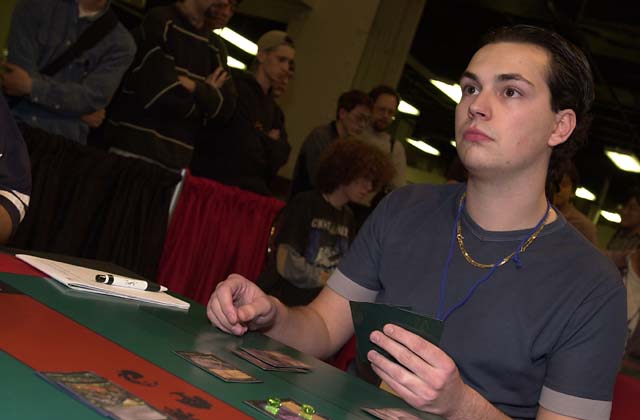 When told that he should gain 12 life instead of 6 when attacking he replied "Another 12? Wow." There was no way that Johann could compete. When the game ended, Rose was at 55 life.