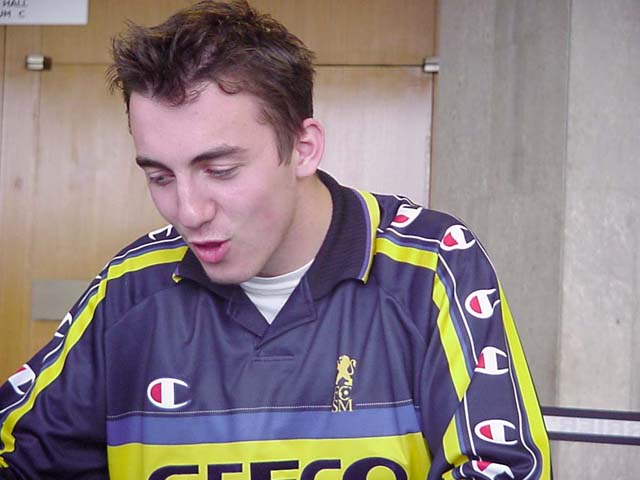 Olivier needed to win, and that would definitely put him in the Top 8, whereas Thomas only had to draw, but if he lost he would almost certainly finish just outside the Top 8.

Thomas went first and summoned a second turn Dream Thrush, and a third turn Riptide Crab. This less than stellar offence was halted by Olivier's Pincer Spider, and Stormscape Apprentice.

For a while the pair did no attacking, just playing creatures. Preyer summoned a Stormscape Apprentice and Samite Pilgrim, and Ruel an Ancient Spider and a Protection from Blue Voice of All.

The Voice started to attack, as Thomas could neither tap it nor block it with his flyer. The Frenchman gained further advantage by drawing three cards with Allied Strategies, and the next turn a further four with a second Strategies.

Preyer had an answer to Olivier's current threat, Voice of All as it was Shackled, but as Ruel had seven cards in hand and a much better board position, it was difficult to see this game turning out any way other than a French victory.

He played two Llanowar Knights and a Riptide Crab, and even though Thomas got some of his card advantage back with a Probe, things were just going from bad to worse for him. Olivier attacked with everything and Thomas took the minimum amount of damage - five, bringing him to thirteen.

Olivier also cast a Glimmering Angel, and attacked again with everything even though Thomas had just cast Crosis' Attendant. Another five damage brought Thomas to eight.

Olivier thought for a while on his next turn, but Thomas' Aurora Griffin had finally stopped the beats. Instead he cast Collective Restraint, saying "I think you should try to deck me, you're not going to kill me with your creatures", as he did so.

Ruel now tapped the Aurora Griffin, and it is a little surprising he didn't do that previously, as it allowed his Glimmering Angel to get through for two further points. Thomas now cast the bomb in this situation, Atalya, Samite Master, commenting "Perhaps the decking plan isn't so bad".

It didn't appear that Olivier could get through the damage any more, and Thomas's life total could potentially spiral out of control with the Atalya in play, so Ruel was in serious trouble with only eight cards left in his library. He used Terminal Moraine to look through his library, and after thinking for a while, realized there was no way he could race the Legend, and conceded, as he now needed to win two games and wanted to have as much time as possible to do so in.

The first game took just over twenty minutes, leaving them with only twenty-eight for the remaining two games. Olivier had to mulligan going first in the second game, and his six card hand was terrible as well - only an Island and a Mountain for land, when his main colors were white and green.

Thomas played Stormscape Apprentice, Riptide Crab, Dream Thrush, and Samite Pilgrim before Oliver found a Forest, but his two Pincer Spiders looked like they may be able to stop the beating for a while.

Preyer had other ideas, casting Wash Out to return all green cards to Olivier's hand, and bringing him to eleven. Next turn Olivier found a Plains with a Primal Growth and summoned Llanowar Knight.

It was tapped in his end step - Preyer attacked - Olivier was on eight - and Thomas summoned Benalish Trapper. Oliver played the two Spiders as well, and Thomas tapped those and brought him to five, also casting Aurora Griffin.

Olivier Hobbled one of the attacking Dream Thrushes, cast Allied Strategies and even Tribal Flamed the Stormscape Apprentice, but he was on such low life that it didn't appear possible he could survive, Preyer's next attack bringing him to one at the cost of a Samite Pilgrim. 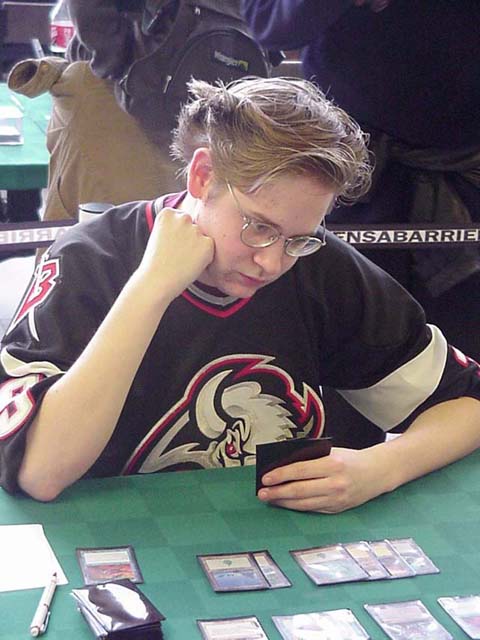 But just perhaps there was the hope of Olivier surviving. A Protection from White Voice of All and a Stormscape Apprentice gave him exactly enough blockers but if Thomas drew one more creature it would be over.

He drew Shoreline Raider which would force Olivier to have to topdeck. He wasn't happy with this so he Prohibited it instead. Ruel's next draw phase gave him Armadillo Cloak - but he couldn't put it on the Voice as he would like of course, because it has Pro White.

Instead he put it on Llanowar Knight. This made Preyer tap it in his attack step and in particular meant that Thomas could not tap the Stormscape Apprentice. Now Olivier would have a chance to use his Apprentice on Thomas' Benalish Trapper and start attacking with Llanowar Knight - and gained a lot of breathing room by gaining five life and going to six.

Thomas drew nothing, and Olivier cast yet another Allied Strategies, drawing four cards. Another hit from the Knight and it was Thomas who was behind in the life race - he was at ten with Olivier on eleven.

He took yet another hit, and couldn't even Exclude Olivier's Benalish Heralds, as Ruel was ready with Prohibit. Thomas drew another land, and conceded - Olivier Ruel won the impossible game.

Thomas made Olivier play first, but once again Preyer was quickly out of the blocks - this time casting a turn one Stormscape Apprentice and having his second turn attempt to cast one Prohibited.

Ruel couldn't stop him casting Silver Drake, though, but after it attacked once it was Hobbled. Preyer played a Dream Thrush as well and attacked once with it before the Frenchman summoned a Pincer Spider.

Preyer cast a Stormscape Apprentice, and an Aurora Griffin, Olivier a second Pincer Spider, but when Thomas cast Atalya, Samite Master, it was obvious that he needed a Shackles to stand any chance of winning this game.

In fact he was losing it - Thomas used Rushing River to return both Spiders to Olivier's hand, and attacked to bring Ruel to eight. Facing a certain death for the Frenchman, the players agreed to draw. Yes that's right, a draw. As Preyer was guaranteed top eight with this result, he offered the draw as a friendly gesture to give Olivier Ruel a Top 16 finish.