Round 14 Feature Match: Pity the Fool

De Rosa, the defending National Champion, is in the unenviable position of facing elimination. Anxious to make the single-elimination rounds and prove he's still the man, he'll have to go through Billy Moreno, considered by many to be one of the great Constructed minds, and himself wanting the title, trophy, hot chyx and random accoutrements that come along with being the Elvis Presley of Magic, at least for one year. 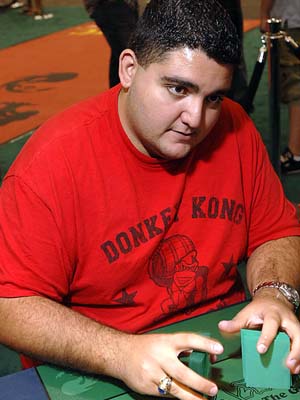 Ant brought his angry green-white machine of love, justice, and the American Way, while Billy's black-white Hand in Hand will try to soothe the savage beasts and Mortify them beyond repair.

Moreno started with a mulligan into turn-one Isamaru, while Ant led with an Elf. Jitte came down hard and kept the dog company, and Ant added Watchwolf to his arsenal. Equip, serve, all our guys die brought the board back to even Steven.

Moreno dropped Savannah Lions, while Ant added a Hierarch. As per, target creature grabbed Jitte and the cat and elephant traded. Another elephant hit Ant's side.

Billy used Castigate at the opportune moment: Congregation at Dawn would turn bad times into game over time.

Glare of Subdual hit, and with Billy stuck on two lands and with only a lonely Jitte in play, he finally found something he could drop on the table: Hand of Cruelty. Oh, and it gets around Glare all the live long day, yo.

With the momentum clearly shifted, Ant focused his steely gaze on the field, perhaps looking for a way around this fine mess that developed out of nowhere. Selesnya Guildmage hit and he turned it over to Billy.

To my not-very-good-at-Magic eyes, Billy's question becomes: do I equip and serve, or equip and block? He plays a Hyppie and sends it back, which kept me guessing, though I didn't hear any large gasps from the crowd (at least from Osyp), so who knows?

Ant drew a card, conveyed absolutely no emotion, and quickly gave it back to Billy.

Moreno equipped to Hyppie and made it go red, though a lowly elf backed up that noise to "declare attackers," tapped that non-pro-white, and made Billy pay for not lacing up his Honor. Was this a fabled "Moreno Mistake" or no? He had no further action, and back to Ant it went.

Ant tapped Hyppie, and Billy moved Jitte so it could talk to the Hand, girlfriend. However, he kept it on defense and put the ball in De Rosa's court.

Ant took that damned ball and ran all silly up in the red zone: his entire team turned sideways and forced Billy into a corner. Mortify ended Yosei's life, but before damage, Ant Seed Sparked the Jitte. With Billy's versatool out of the picture, and two more bodies thrown into the mix, he scooped them up.

Moreno elected to draw. Ant double-taked, but apparently the fear of mana-screw had Billy a little gun-shy. Or something.

Whatever, Ant looked at his seven, said "nice strategy," and shipped it back. His six were fine, Moreno's seven were too, and away we went.

Billy dropped the turn one Lions, while Ant went on a bounce land session. Moreno added Bob to the mix, and threatened to just take this game over, especially since Ant had no turn three play.

Paladin en-Vec joined Moreno's team, and Hierarch dropped for Ant and prepared to eat up some tiny white creatures.

Moreno dropped Jitte and put it on the 2/2 first striker, which was never a fair play at all. Ant didn't block, and preferred instead to play Glare and prevent the Jitte from getting even more ridiculous.

Bob turned up Shining Shoal, which is just about the worst place for the world's greatest "heh on you" card ever. Pithing Needle on Glare dropped, and now we awaited the Mortify that Moreno must have in hand, or soon anticipated drawing.

Billy dropped a couple more weenies and seemed content to sneak in a few points of damage, but when Ant dropped Yosei, again with a thud and crash, Billy put a hand to the temple and entered his deep thought phase. 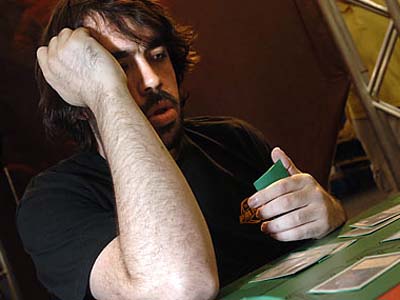 Billy Moreno is either fully concentrating or half asleep.

Billy pumped Bob three times, Shoal threw 4 elephant damage to Ant's grill, and at the end of battle, Ant's life total rested on 2. Yosei came down for Ant, and with Billy's lockdown from the previous death set to expire, his window of opportunity appeared very narrow.

However, Ant dropped Miren, hit for 5, and then broke the damned glass and showed Billy the meaning of "Stasis you into oblivion," all while gaining 5 life for his troubles. Guildmage dropped, the win condition du jour.

With Billy at 6, Guildmage pumped his bad self, put Billy at 2 after Jitte life, and we're on to the most exciting upkeep phase ever…

Freed from the burden that is Potential Bob Death, he forgot to draw a card for the third turn in a row, got reminded to do so by the Billy Watch Judge, and then smashed Ant's life to below zero.

Osyp and a few other kibitzers complimented Billy for playing so badly and still winning.

Ant mulliganed again but stayed with his six. He dropped his own Jitte on turn two, and Wood Elves after, and showed the writing on the wall.

Paladin en-Vec appeared to keep counters off Jitte, at least for a turn, so Ant simply dropped Hierarch and shipped it back.

Moreno dropped Hand of Honor, and Ant's team was completely shut down: no Jitte counters for the foreseeable future. Ghost Council joined the fray, as did Isamaru, while Ant made a token end-of-turn.

Carven Caryatid hit the green zone and quickly grabbed the Jitte. When Ghost Council came in, Ant let it through and dropped Yosei, the Great Equalizer. With a muddied up board and options aplenty, Ant let out, "This game is so hard," and a sigh that proved it. 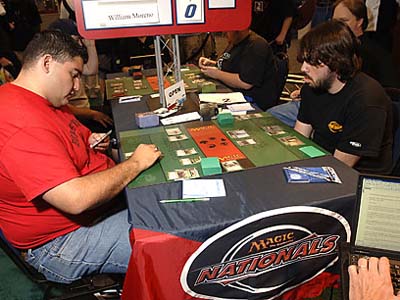 This game is so hard.

Yosei grabbed the Jitte and into the zone he went. Billy Mortified that nonsense, but at the price of everything but Hand of Honor meeting tap city. On Ant's next turn, a token took up the Jitte and cast himself into the fray: a lonely attacker, though now with two counters.

A new Yosei hit the board and grabbed the hell out of the puffy-ass Jitte.

Now able to untap, Moreno sent in the Council, which knocked Ant to 11, and played his own Jitte. Ant killed Hand of Honor with the counters, and we all wondered if Billy would sac it to Council in response. He did.

Yosei went angry and red and highly pissed, then Ant dropped a second Yosei, offering Moreno two turns of absolutely nada. With Billy at 13 and not untapping until 2007, Ant sent in 7 points of love with no resistance.

At 6 life and still locked down for one more turn, Billy offered the hand.

Antonino De Rosa wins 2-1 and makes it to Day Three, where he'll likely put up one hell of a fight. As Mr. T was fond of saying: "I will destroy any man who tries to take what I got." Pity the fools who try to grab Ant's swag, heavens no and hells yes. Tune in Sunday.