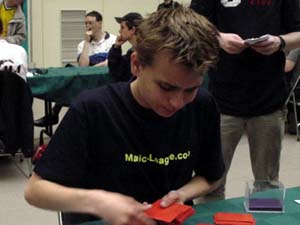 13 rounds and not much sleep both players need one more win in order to make their first lifetime top 8. Tobias is playing the German affinity deck and Roelof plays Goblins.

Tobias wins the toss but has to mulligan his opening 7. His 6 card hand is really good though as on turn 3 he already has 3 Frogmites and a Ravager. Roelof only has a Sparksmith and a Clickslither to match the artifact creatures and is forced to make unfavourable blocks soon in order to stay alive. When his next draw doesn´t yield an answer, which problably is not in his deck, he is forced to concede.

Roelof keeps but once again Tobias takes a trip to Paris, twice this time.
Roelof starts off with a Sledder and a Sparksmith which get Pyroclasmed on Tobias his second turn. No worries for the young dutchman though as he plays a Warchief, Clickslither and Siege-gang Commander. With his 2 mulligans and just an Atog in play Tobias scoopes and a third game will have to decide who will advance to the top 8.

Yet again Tobias' first 7 cards are not quite what he was hoping for but he decides to take the gamble. 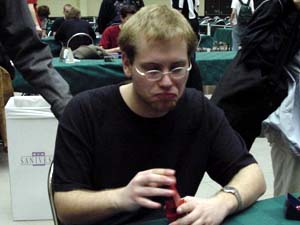 Although Tobias' draws are good Roelof seems to have all the answers in the beginning of the game: both Arbound Ravagers die and after having dealt with that Roelof lays down 2 Sharpshooters.

The only card he's unable to remove are Tobias´ Skullclamps. Atog comes down for Tobias and with the help of the 2 Skullclamps he´s able to draw 4 cards. This gives him the Pyroclasm he needs to kill the Sharpshooters and clear the way for more creatures. With the insane amount of cards Tobias is able to draw it doesn´t take him long to finish Roelof off and advance to the top 8.