Eight time Pro Tour Top 8 competitor Paulo Vitor Damo da Rosa (PV) has been in this position before: 10-3, and in need of a couple more wins to advance to the Top 8.

By contrast, Jason Schousboe, a Midwest player who tested for the event with Rookie of the Year Matthias Hunt, Grand Prix Atlanta 2011 Champion Jason Ford, Brandon Nelson, and Kyle Stoll, was happy just to get to Hawaii.

Under most circumstances, winning a PTQ, and then going 10-3 to start your first Pro Tour would be the difficult tasks to accomplish, but when Schousboe's flight got canceled on Thursday, he found himself desperately scrambling to make it to Hawaii in time for the first round of the tournament...

For a while, it looked like Schousboe might not be able to play at all this weekend, but after a bit of haggling and pleading with his airline representatives he was able to find a series of flights that got him into Honolulu at 6am on Friday, giving himself just enough time to drop his bags off at his hotel before (sleepily) cruising his way to within three match wins of the Top 8. 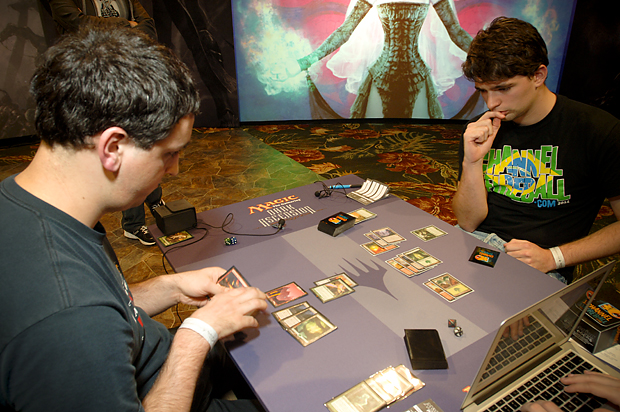 Jason Schousboe went through quite a tiring ordeal in order to get to the Pro Tour with mere hours to spare. Now he's fighting for the Top 8. His opponent? Brazilian pro and ChannelFireball member Paulo Vitor Damo da Rosa.

Schousboe got off to a somewhat aggressive start with two Green Sun's Zeniths that he used to fetch two copies of Strangleroot Geist, but PV was able to quickly neutralize them when he cast two copies of Huntmaster of the Fells on consecutive turns.

Schousboe tried to pull away with a Sword of War and Peace and a Huntmaster of the Fells of his own, but PV had a Slagstorm to clear the board before Schousboe had equipped the sword to any of his own creatures.

A couple of Primeval Titans later, and PV had taken the first game. 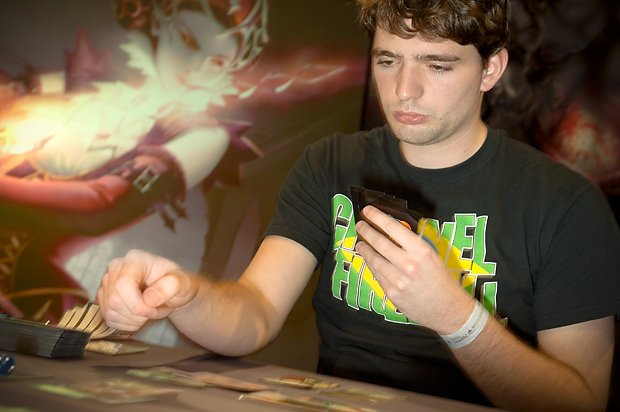 PV presses on in the first game.

Schousboe started the second game by taking mulligans down to five. His five card hand, however, was quite explosive as two Llanowar Elves, a Birds of Paradise, an Increasing Savagery, and a Kessig Wolf Run put PV under an immense amount of early pressure.

Unfortunately for Schousboe, PV had all the answers he needed as he cast a Beast Within to deal with the 5/6 Birds of Paradise and a Slagstorm to wipe the board clean.

A Strangleroot Geist drew out a couple of removal spells from PV, but it also gave Schousboe the lead on life that he needed to profitably cast the Manabarbs that he had just drawn.

Inferno Titan came down for PV, but Manabarbs put the Brazilian to a mere 6 life.

Huntmaster of the Fells came down for Schousboe, but it didn't look like it would be enough as an attack from Inferno Titan and a Galvanic Blast left Schousboe all but dead. Schousboe was on 8 life with a Manabarbs in play, and only a single card in his hand facing down an opponent with an Inferno Titan...

At this point, PV no doubt thought that he had the game in hand, but Schousboe drew exactly the card that he needed to win the game. Birds of Paradise.

PV attacked with his Inferno Titan, killing the Bird and knocking Schousboe down to 5, but with morbid now turned on, Schousboe was able to use his Brimstone Volley to knock PV from 5 to exactly 0. 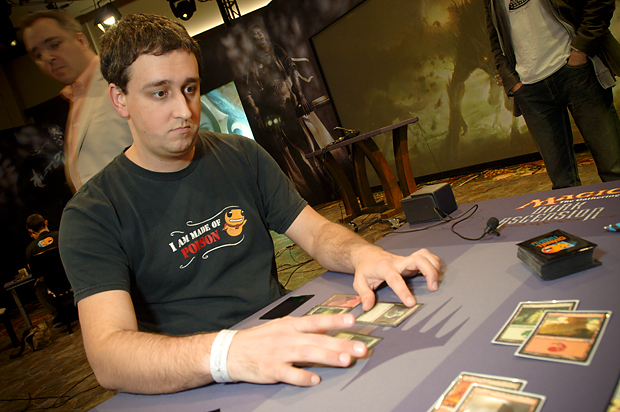 Schousboe overcomes a near loss with some morbid Brimstone Volley action.

PV had to start the deciding game with a mulligan, and went the first few turns without making a play while Schousboe got things going with a Llanowar Elves and a couple of Strangleroot Geists.

PV's Huntmaster of the Fells ate half of a Strangleroot Geist and a Dismember, but without a red source, Schousboe knew that he was in trouble.

A second Huntmaster of the Fells bought PV some more time, while Schousboe's deck again failed to cough up a red source and forced him to spend his fifth turn casting a couple of copies of Garruk's Companions.

Under no immediate pressure, PV was able to calmly cast a Primeval Titan to set up an Inkmoth Nexus/Kessig Wolf Run kill a couple of turns later.